He Says: Nothin’ Like an Oklahoma! Cowboy Singing a Serenade 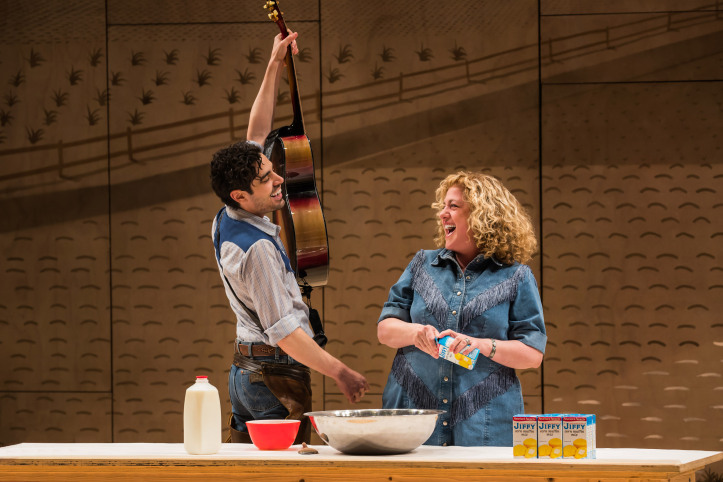 He Says: Nothin’ Like an Oklahoma! Cowboy Singing a Serenade

Serenaded by a handsome cowboy with a guitar. I don’t know about you, but it’s a pretty special thing and just like the glorious Ali Stroker’s Ado Annie, it’s somethin’ I don’t know if I could ever say no to. Especially when the bright golden haze casts its spell over the Circle in the Square meadow, sung to twangy high heaven by the absolutely spectacular Damon Daunno (The Bengsons’ The Lucky Ones) as cowboy Curly McLain. It floats and sails with country jamboree-style through this inventive and daring revival of Rodgers & Hammerstein’s Oklahoma! cowboy boot stomping its way into our heart. When that first song, “Oh, What a Beautiful Morning” shifts into a duet with the perfectly delectable Mary Testa (PR’s Government Inspector) as Aunt Eller, the cowboy, walkin’ and strummin’ his guitar with ease guides us up to the rafters on the lilt of his delicious delivery. It could “stop a pig on the road“, one might say, but just don’t go touchin’ his hat… Oh, no, she didn’t….

We all know a love song when we see it, and Daunno’s Curly certainly isn’t foolin’ anyone with whom he has his eyes clearly focused on. The lovely Laurey Williams, portrayed with a fascinating actorly touch by Rebecca Naomi Jones (ATC’s Describe the Night), gives it all away with that comic flair of the face and the Sam/Diane glare we all know too well.  It’s a shame that her voice isn’t up to the level this piece requires, as it tends to sound good and rough, until the song asks for soft and sweet, and for this lady to hit those notes, she has to belt it out, rattling the edges sharply, when the feeling should be smooth. It’s like she’s singing in a different more rock n roll version of this musical taking place up in the northeast, rather than the Nashville-tinged Oklahoma! we have so beautifully and eccentrically laid out before us.

But the song we all remember, besides that grand title song, sung to perfection by this talented and energized cast in the finale, is the iconic “I Cain’t Say No“, gloriously sung to hilarity by the magnificent Ali Stroker (Broadway/Deaf West’s Spring Awakening). She knocks over the original from the film (sung by the perfect Gloria Grahame, who is wonderful in her own right), riding over her timing with her own delicious take. Saddled into the popular song is Ado Annie trying to figure out how to stick to just one man, or at least try to stay true to the one she picks. Will it be the perfectly slick and scheming Ali Hakim, uniquely played by the very funny Will Brill (Public’s Illyria) or the spectacularly simple and sweet Will Parker, goofily played by the talented James Davis (The Pearl’s Hamlet) who can’t seem to do math or hold onto his much-needed fifty dollars for the life of him, no matter what’s at stake. Will Mann (Broadway’s Memphis) as Mike, Anthony Cason (Soho Rep’s Is God Is) as Cord Elam, and Mitch Tebo (Gallery Players’ Plaza Suite) as Andrew Carnes are left to the sidelines for the most part, but their presence, when needed, work well, especially during the chilly auctioning off of the young girls’ lunch-boxes and pies. And yes, if you think that sounds awfully and uncomfortably sexualized, all I can say is #MeToo.

Slap happy and funny in general, but not as wickedly funny as Gertie Cummings’ perfectly pitched laugh, hilariously portrayed by the fun Mallory Portnoy (Public’s Privacy), this Oklahoma! also knows how to show its dark and dangerous side, much more than that iconic film from 1955 starring Gordon MacRae (Curly), Shirley Jones (Laurey), Eddie Albert (Ali), and Rod Steiger as Jud Fry. In this Broadway transfer from a sold out St. Ann’s Warehouse earlier this year, Patrick Vaill (Bedlam’s Peter Pan) gives his Jud a creepy and sinewy edge that seeps out, vanquishing the smell of chili and corn bread, and making us all want to lean back from his dangerous snarl. Darkening his anger into blackness and projecting his close contact with Curly in the smoke house does elevate the dialogue into something that has a far more treacherous and menacing edge, but it also, oddly enough, gives an outrageous homoerotic quality to their close proximity. It’s uncomfortably strange for strange sake, and leaves us blind to the purpose. The words ring dangerously true, but the presentation throws us off.

Something similar could be said with the dream ballet originally choreographed by the legendary Agnes De Mille at the beginning of Act Two. The dance always struck me as beautiful but unnecessary, and as choreographed with an athletic chop by John Heginbotham (Dance for PD), the lead dancer, Gabrielle Hamilton (Point Park graduate, 2018) soars and moves throughout the space with a strength and glaring vision of power and force, but in the end, the creation doesn’t add up or even add to the procession, feeling like an ingredient from another era and a different state, clumsily taking up time in this twangy and true Oklahoma! when we’d rather be hanging out with the cowboys, or even those farmers, whether they be friendly or not.

Designed without a single nod to the original by Laura Jellinek (2ST’s Mary Page Marlowe), this Oklahoma! is from a whole different time-frame and cow country. It saunters out with such a unique style and vision, courtesy of director Daniel Fish (Chocolate Factory’s Don’t Look Back), basking itself against the painted back-walled landscape courtesy of projection designer Joshua Thorson (A.R.T.’s Paradise Lost). The revival soars as high as a bird in the sky, that is until it catches its wings on the electrical wires of lighting designer Scott Zielinski’s (Signature’s Jesus Hopped the ‘A’ Train). Together with director Fish, the two get tangled up in their troublesome eccentricities, trying to be too clever and different for the sake of being just that. Those choices leave us in the dark during certain confusing constructions, giving us time ponder the questions of ‘why now’ and ‘for what purpose’. It uses her own words against her, in a way, livening up the proceedings of a good Polka Ten Step dance, but tripping over its own feet for trying too hard to be different.

The cast, though, rises this iconic tale back up, finding the honesty and play within the dynamo dynamics, each one waiting their turn to shine, shaking it big from horn to hoof. They gently play and connect with the band (Joe Brent, Brett Parnell, Hilary Hawke, Sarah Goldfeather, Leah Coloff, and Eleonore Oppenheim)  with a sweetness that is just so darn intoxicating, much like the majority of this pleasurable show.  The Rodgers and Hammerstein music, book, and lyrics sound perfectly lovely emanating out of that orchestra pit center stage, gettin’ me all worked up with the powerful and clever orchestrations by Daniel Kulger (PH’s I Was Most Alive With You), solid sound design by Drew Levy (Broadway’s Chaplin), and strong musical direction by Nathan Koci (Arena’s Mother Courage…). It’s a great revisit to the wide open plains of the state of Oklahoma!. Giving us a chance to bask in the warm summer glow of Curly’s serenade and Aunt Eller’s warm laugh. I could listen to that country guitar picking until the sun sets over that golden meadow. It’s as pretty as a picture, and going Curly’s way.

RossDecember 29, 2021
Read More
Scroll for more
Tap
Burn This Has Star Wattage
Ben Platt is Back With a New Video