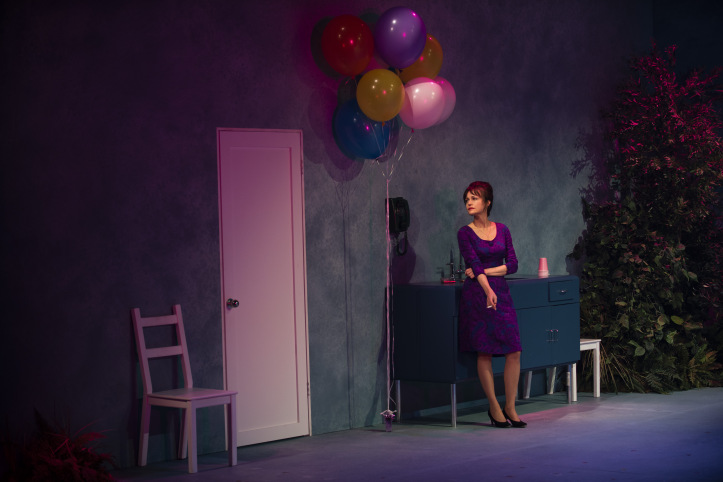 [Over the next few days, I’m posting reviews of shows I saw before Broadway and Off-Broadway went dark.  It’s a sad and confusing time, but one where we need to remember and believe in the power of community and everything that theatre stands for. We need to support those who are desperately out of work now until the lights get turned on once again (think about donating to theatre companies or out-of-work artist – I’m not sure how yet but I’m looking into it). Let’s all send a thank you to those who work so tirelessly to bring these productions to life day in and day out. It must be a shock to their systems to not do the thing they love to do. We need to support one another as many isolate themselves trying to be safe or not spread this virus. I do not want to be a new version of Typhoid Mary, so I’ve been quiet and removed, slightly worried about my cough that I’ve had a few days now, but less worried because there is no fever and I’m a pretty healthy and fit man. Our world has changed quite dramatically almost overnight, but I for one have to believe that we will return somehow from all this, and sit once again as a community watching art and design stand proudly before us on stage.  So here are a few reviews. It’s weird to finish writing them, but I want to remember, so I can remain hopeful. I hope this will have the same affect on you.]

[seen on March 6, 2020] Inserted in the playbill, there is a flyer suggesting that “if you or someone you know is struggling with mental health, we recommend reaching out to the resources below for support.”  And then, they listed the National Suicide Prevention Lifeline (1-800-273- TALK), NYC Well (1-888-NYC-WELL, and Crisis Text Line (clink on the titles to be taken to their websites). Good things to know, and there couldn’t be a stronger sign beyond the title of Alice Birche’s new play Anatomy of a Suicide playing at the Atlantic Theater Company of what is in store for us. As directed within a complicated structure of time frame layerings and moments side by side by the detailed Lileana Blain-Cruz (NYTW’s The House that Will Not Stand), this new play about the destructive chaos in one’s head explores the waves of grief that come generationally, mother to daughter, and then, once again. When will the pain stop?

Carol is the first, played with extraordinary intelligence by Carla Gugino (RTC’s After the Fall). Married to John, portrayed by the sturdy Richard Topol (Broadway’s Indecent), she has already attempted to end her life, parceling out the details bit by bit in a well orchestrated first scene. Repetition and repeat, asking questions and answering always the same, this is the dynamic that transcends. The clean up is messy, and the structure of the piece keeps us guessing, wondering how the three lady leads connect and intersect. Anna, played dynamically by Celeste Arias (Old Globe’s Uncle Vanya), expands on the chaos. Saved and then lost in the care and affection of a marriage to Jamie, played with elegance by Julian Elijah Martinez (Broadway’s Network), her history won’t let her embrace back or escape the heredity of despair. She is tragedy personified, as could be said of the last of the three, Bonnie diligently portrayed by the wonderful Gabby Beans (LCT3’s Marys Seacole) as she pushes away the magnificent Jo Mei (Off-Broadway’s Babette’s Feast) who plays Jo (& Laura & Lola) with wordless replies. Her pain is less vocal but is by no means less powerful Playwright Birch (Ophelias Zimmer) layers the bandages of different sorts on and off as we bounce quite confusingly and effectively back and forth using those wordless pauses to expand the isolation inside these three women’s minds. It’s calamity and energizing, making us work hard to understand, and when it finally comes together, inch by inch, we are less happy than anticipated, yet more disturbed by what is transpiring before us.

On a simple but defined stage, made graceful and clear by scenic designer Mariana Sanchez (Public’s Troy), with strong costuming by Kaye Voyce (Public/Broadway’s Sea Wall/A Life), detailed lighting by Jiyoun Chang (NYTW/Broadway’s Slave Play), solid sound design by Rucyl Frison (Echo’s Resolve), and projections by Hannah Wasileski (Signature’s Fires in the Mirror), the pieces of the puzzle behind the question, “are you happy?” are laid out for us to put together on our own. The cast of supporting characters shine and expand the multi-layered horizon, particularly Ava Briglia (Broadway’s School of Rock) as the younger Anna (Daisy & Child) and Miriam Silverman (Broadway’s JUNK) as Emma, Karen, Daisy, Esther, May & Diane. Jason Babinsky (Broadway’s Network) as Tim, Toby, Steven & Mark and Vince Nappo (RSC’s The Merchant of Venice) as Dan, Felix, Dave & Luke, fill in the spaces and silences between attachments and marriage vows, but it’s Mei’s detailed portrayals that ring so emotional true throughout. The end result hits hard, with Bonnie’s conclusion that this suicidal anatomy can only be handled in one particular way, and that way sits heavy but clear. “I’m very sorry” is all that can be said by these women, but it doesn’t answer the question of how to solve the dilemma. History repeats, and in Birche’s new play Anatomy of a Suicide, no simple solutions are given, which is authenticity at its best and strongest.