He Says: The Constitution Comes to Broadway on the Back of Heidi, not Hamilton 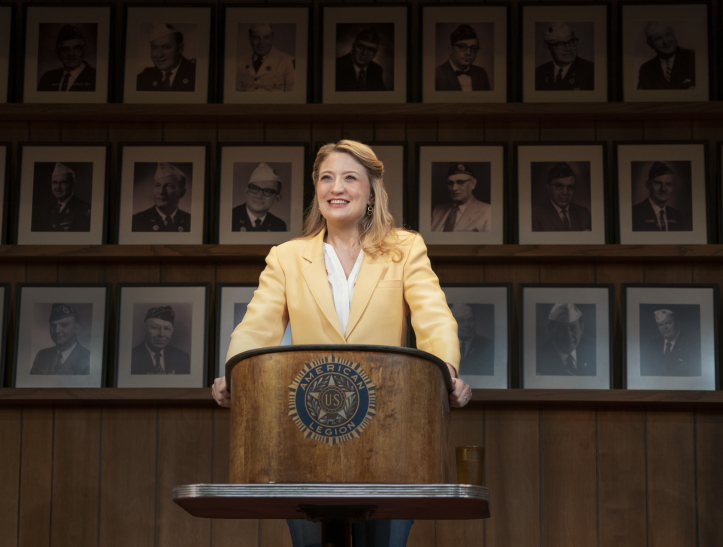 He Says: The Constitution Comes to Broadway on the Back of Heidi, not Hamilton

When I saw this production first off-Broadway at the New York Theatre Workshop, it just happened to be one of the most dreadfully upsetting days in American political history since that horrendous last election, and yes, I’m talking about Kavanaugh. I found myself being thrust headfirst into a debate centered around the Constitution and the impact it and the male dominated Supreme Court has and continues to have on a woman’s body. And even though last night, when I saw What the Constitution Means to Me at the Helen Hayes Theater on Broadway, my head was not swimming in one particularly jarring example of inequality and injustice, the sentiment that hangs in the political air across this land is just as swampy. We are told, upfront by the “psychotically polite” dynamic star and creator, Heidi Schreck (Grand Concourse) to think of ourselves as a pack of old cigar-chomping white men sitting in attendance of a fifteen-year-old young lady giving a speech about the Constitution of the United States. It’s a smart and inventive setup, this recreation from Schreck’s own history, even if you “can’t see the structure“. Formulated around a traditional competitive debate given by wise teenagers,  this powerful and reminiscent creation is the originating seed for this evocative play What the Constitution Means to Me to grow big and strong, spreading its wings out wide to encompass us all, and luckily for us all, it is now being presented on Broadway.

This auditorium scenario, designed with detailed dimension by Rachel Hauck (Broadway’s Latin History for Morons, Ars Nova’s The Lucky Ones), with simple straightforward lighting by Jen Schriever (Broadway’s Eclipsed), solid sound design by Sinan Zafar (Waterwell’s Hamlet), and exacting costumes by Michael Krass (Broadway’s Noises Off) is not the be all and end all of this creation. It is simply a jumping off point to a place that triggers a strong emotional response for all involved, especially for the centerpiece star of the show. It is at times hard to fathom the delusional stance of these men in power, and frighteningly intense as well. As directed with a free-flowing and creative hand by Oliver Butler (Vineyard’s The Amateurs), it hits us deep and sharp, almost as complicated as the ripples of distrust and pain that strike through Schreck, shaking and overwhelming her composure that feels, most definitely, out of the box. This deeply personal oration resonates within her soul and ours, as disturbingly deep as how clearly dysfunctional this country that I call home truly is. It’s terribly upsetting, especially the well-chosen audio bits and pieces that are shared. They are required listening, and I’m thankful for Schreck’s thoughtfulness and smart move.

Mike Iveson (Public’s Plenty) gives Schreck a much-needed positive male support system, while alternatively adding a structural and creative dynamic that adds and floats the piece up higher than one expects, adding layer upon layer.  It is a greatly needed construct, at least for this out gay man, one that I’m trying hard to not disclose the surprise and inventiveness. It adds alternative vistas to the ride, bringing me personally into the room more than I already was.  At NYTW last fall, I had the pleasure of seeing Rosdely Ciprian, a well-spoken firecracker and member of her school’s debate team join in to the conversation midway through, breathing some youthful energy and spunk into a debate that is in dire need of happening across this country. This time around, lucky for me, I had the fortune of seeing the other young lady that I didn’t have the opportunity to see downtown, Thursday Williams, an equally wise far-beyond her years young lady who couldn’t have been more brilliant or commanding. I look forward to the day either one rules the world.

Dramaturg Sarah Lunnie (Broadway’s A Doll’s House, Part 2) makes sure we stay on track and on solid ground, but the effortless grace of Schreck, pulling hard from her past experiences and history, solidifies the experience in such a compelling and moving way that one can’t help but be moved.  This is the conversation that must happen, as the debate outside swirls out of control, and unfortunately for us, the masses are missing the point of what is at stake.  It lightens my load, seeing the smart and funny What the Constitution Means to Me, although my broken heart stays confused and perplexed in these trying times. Disheartened and frustrated, hoping for change, I applaud Schreck for giving us a debate that feels so pure and required. I welcome your covert resistance, and every other kind of resistance you bring to the stage.  You are a voice much-needed.