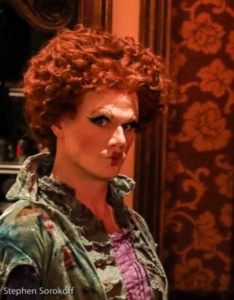 Jay Armstrong Johnson’s cabaret show at Feinstein’s/54 Below will be a sprawling musical potpourri that involved well over a dozen musicians, backup vocalists and guests. This  hit concert returns in an encore, with a Halloween twist. Expect Hocus Pocus to make an appearance, a stage full of artists in Halloween costumes, and even a prize for the audience member with the best “Studio 54 celebrity” Halloween costume!

Jay Armstrong Johnson wowed Broadway audiences in On The Town (Chip), Hands on a Hardbody (Greg), Hair (Claude), and Catch Me If You Can. He took on Anthony Hope in the New York Philharmonic’s Sweeney Todd and his performance as Herman in Encores’ Most Happy Fella “a was considered a standout.

In 2015, Johnson was cast in the recurring role of FBI recruit, Will Olsen on the ABC thriller series Quantico.

Johnson is back on the great white way at Feinstein’s/54 Below mixing things up October 31st at 7pm and 9:30