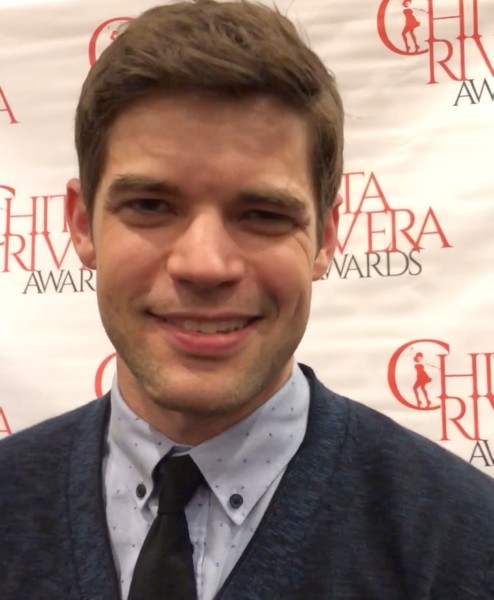 Jeremy Jordan, Matt Doyle, Lindsay Rider and Michael Mott at The Green Room 42 For The Actors Fund and More

Jeremy Jordan, Matt Doyle, Lindsay Rider and Michael Mott at The Green Room 42 For The Actors Fund and More 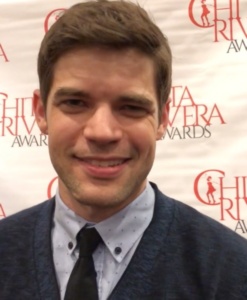 Michael Mott is a musical theatre composer/ lyricist and pop singer/ songwriter living in New York City.  After enjoying a successful career performing in numerous Off-Broadway, regional and national touring shows, Mott shifted his focus to writing and was accepted into the BMI Lehman Engel Musical Theatre Writer’s Workshop.  He has since been named one of Playbill’s “Contemporary Musical Theatre Songwriters You Should Know.” Michael’s debut album, Where The Sky Ends, is a compilation of his original theatre, jazz and pop music performed by some of the best singers on Broadway.  The LP has been referred to as “a masterpiece” by BroadwayWorld and was released by Grammy Award winning label, Broadway Records. Where The Sky Ends: The Dance Remixes was released by the same label and spawned the popular dance track, “Gone (Julian Marsh Ethereal Mix),” which has surpassed 1 million streams on Spotify.  In 2016 he composed a Christmas single for Broadway star, Laura Osnes, “Christmas, Will You Stay?” His follow up studio album, Abandoned Heart was released in 2017 by Broadway Records.  This time, Mott took a much broader approach honing his voice and focusing on a more top 40 sound.  Joined by some of Broadway, television and pop’s most celebrated talents, this record offers a variety of feel good pop, anthemic soul and introspective ballads.

THE GREEN ROOM 42 recently celebrated its one year anniversary as the theater district’s premiere destination for live music and events. The 140-seat space lets audiences experience shows up close and personal. During the shows, guests can enjoy Mediterranean-inspired dishes alongside signature cocktails, craft beer and wine with no food/drink minimum. Tickets can be purchased at www.TheGreenRoom42.com. The Green Room 42 is located at 570 Tenth Avenue in New York City; @TheGreenRoom42.

Composer of In Transit on Broadway brings his live jazz show to the stage in his Green Room 42 return hit. This is a night of great songs, Broadway classics, and special guests from Broadway and beyond.

Mykal Kilgore, the celebrated vocalist from The Wiz Live! on NBC TV, Postmodern Jukebox, Motown on Broadway and more, returns to The Green Room 42. The show features original music from Mykal’s upcoming album and covers of some of music’s most heralded pop favorites with a Kilgore twist. After performances for “The View,” the Mayor of New York, and Brooklyn Nets, these live intimate shows powerfully return Kilgore to the concert stage.He became a national viral sensation when his “Reclaiming My Time – Gospel Remix” was featured on “The View,” National Public Radio and outlets around the world. His R&B, jazz and pop performances with Postmodern Jukebox have garnered millions of hits on YouTube.

Stephanie’s Child is returning to the Green Room 42 on Sunday, June 11th to host a viewing party for the 2018 Tony Awards. Come hear Jan Sport, Lagoona Bloo, and Rosé sing covers and parodies from the musical theatre cannon during commercial breaks, while we live stream the Tonys on a large projection screen! Also, each audience member will get a ballot upon entry to request their favorite musical theater number, and the queens will perform some of them on the spot! Special guests to be announced soon.

Ellie MacPherson, star of the national tour of Show Boat, makes her Green Room 42 debut in “Happy Birthday Mr. President!” A journey through the lives of the men (ugh, yes, all men) who have held our highest office, join Ellie as she chronicles the weird and human sides of our commanders in chiefs. Featuring music from Sondheim, Radiohead, Kander and Ebb and classic Americana, Ellie creates a fun and funny cabaret classroom about what it means to be American. Because if Hamilton proved anything, its that history is more fun with songs.

Tony Award winner and Grammy Award nominee Milly Shapiro (A24’s Hereditary, Matilda) and Abigail Shapiro (How the Grinch Stole Christmas, Liberty the Musical) team up for their Green Room 42 debut in The Shapiro Sisters: The Journey Continues. Milly Shapiro is a Tony Award winner and Grammy Award nominee for her role as Matilda in the original Broadway production of Matilda The Musical. She appears in the feature role of Charlie in A24’s film Hereditary, which made its world premiere at the 2018 Sundance Film Festival. Milly played Sally in the off-Broadway run of You’re A Good Man, Charlie Brown at the York Theatre last year. She has released CDs and singles with older sister Abigail. Abigail Shapiro most recently starred in the off-Broadway production of Liberty: A Monumental New Musical and previously starred in How The Grinch Stole Christmas as Cindy Lou Who. www.ShapiroSisters.com.

Lillias White, star of The Life, FELA!, Cats, Dreamgirls and more, returns to The Green Room 42 in Baby-Makin’ Music by popular demand. Join Lillias as she shares music of love, lust, and loss for an intimate evening with Broadway’s Golden-Voiced diva. Featuring music from Tim McGraw, Rodger & Hammerstein, Cole Porter, and Nat King Cole, Lillias White runs the gamut of the American Songbook. Mother of The Green Room 42, having played the club’s opening in 2017, Lillias White proves she’s at home for this one night only special encore performance that you don’t want to miss.

“Pianomen: An Intimate Tribute to Billy Joel and Elton John”

Neil Berg’s PianoMen pays an intimate tribute to the songs of two of the most iconic composers of the 20 th Century, Billy Joel and Elton John. Hear the crowd-pleasing popular hits and forgotten songs of the last four decades. Listen to the stories, influences and meaning that motivated these compositions.  These timeless songs light up the stage as they are performed by award-winning composer, lyricist and producer Neil Berg on piano, an additional keyboardist and two incredible Broadway/Rock style vocalists.

Spencer Day, the unique #1 Billboard charting jazz singer and songwriter who has appeared at venues ranging from Lincoln Center to the Hollywood Bowl, makes his Green Room 42 debut for his first ever New York Residency. This provides Day with unique opportunity to showcase his humor as well a wide range of his diverse and eclectic original songs, along with interpretations of classic songs ranging from Cole Porter to David Bowie. He brings plenty of spontaneity that feels new and fresh while simultaneously embracing the classic mood of a bygone era.

Tony Award winner Frances Ruffelle is back in town with her stunning solo performance, an intimate evening of song that whispers seductive secrets, lays bare the naked truth and explodes with the one of a kind bottle rocket charisma that’s kept “Frankie’s” ardent fans coming back for more since she created the iconic role of Eponine in Les Miserables and turned “On My Own” into one of Broadway’s most beloved standards. This evening is a wildly entertaining ride straight through the core of the most tender heart, fiery passion and loose comic confidence of a seasoned performer at the height of her game. Frankie has made five solo albums and has performed countless West End shows including her most recent critically acclaimed performance as Queenie in the U.K. Premiere of Michael LaChiusa’s infamous The Wild Party. The show is co-created by Frances Ruffelle and Gwyneth Herbert, with Musical arrangements by Gwyneth Herbert with additional arrangements by Jude Obermuller and David Barber.

America’s Sweethearts is proud to bring their celebration of vintage music to The Green Room 42. Directed by Carly Kincannon, “Sing Sing Sing” pays homage to the WWII era and big band music, not to mention The Sweets’ inspiration, The Andrews Sisters. Featuring songs such as “Bei Mir Bist du Schoen,” “Straighten Up and Fly Right,” and “Boogie Woogie Bugle Boy.” “Sing Sing Sing” is sure to have you dancing in the aisles and singing along so join us for a night full of toe-tappin’ nostalgia.

Max Chernin (Bright Star, Sunday In The Park With George) makes his debut at The Green Room 42 in “The Color Ginger.” Fellow redhead Ryan Fielding Garrett (Kinky Boots, The Man In The Ceiling) joins Max in exploring the ghosts of his past, the delight of the present, and the uncertainty of his future. Songs, stories, historical evidence….bring your sunscreen, and come see this Broadway ginger shine bright!

“Vivian Reed Sings Lena Horne” is a critically-acclaimed show celebrating Lena Horne’s centennial. Her evening includes some of Miss Horne’s well known standards reinterpreted by Vivian’s unique arrangements and vocal stylings with narrative throughout. She will be accompanied by a stellar four piece band including piano, bass, drums and guitar. As we have come to expect from Vivian, this show will be high energy with all of her vocal dynamics, touching on many emotions. Vivian Reed Sings Lena Horne debuted in Pittsburgh, PA with Marty Ashby and the Manchester Craftmen’s Guild Orchestra, garnering several standing ovations. Miss Horne had a personal impact on Vivian’s life years ago when Vivian’s career was being managed by Bobby Schiffman and Honi Coles of the Apollo Theater. Come hear how Lena Horne’ s generosity touched Vivian Reed when she started out as a young budding artist.

Alice Ripley – Tony Award winning star of Next To Normal, Sunset Boulevard, American Psycho, The Who’s Tommy, The Rocky Horror Show and more – returns to The Green Room 42 in a encore performance of her sold-out show. Featuring everything from pop and rock hits to musical theatre standards, Ripley takes the audience on an evening of storytelling and song.

The solo concert debut of the Tony Award nominee from “Hello, Dolly!” and “Disaster!”

Stigma is night to celebrate the crazy in all of us, with laughs, tears, and rock-n-roll/ Join Tony Award nominee Jennifer Simard in her debut NYC solo show covering some of her favorite artists. Stigma is conceived by Jennifer Simard and directed by Thomas Caruso. Steve Marzullo serves and musical director and arranger with Lael Van Keuren and Maggie McDowell on backup vocals.