Life Sucks, But Does This Play? 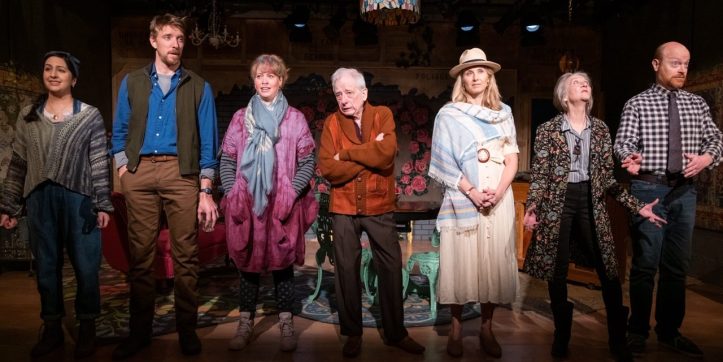 Life Sucks, But Does This Play?

Subtext is everything in Chekhov’s Uncle Vanya, a masterpiece written as an explanation of what might be called, under a layer of sentimentally, “the wasted life” of these miserable souls. Many find it somewhat difficult though to structure any coherent and specific themes as the melancholic mood and atmosphere of the play fill the space rather than present a distinct philosophy of ideas. Not so in Aaron Posner’s take on the iconic tale. He has made his stance clear and precise by titling his play, without any hidden or deep agenda, Life Sucks, a Wheelhouse Theatre production in four succinct acts now being presented with a comedic style and a wink at the beautiful renovated Theatre Row. Posner’s Vanya strikes a very different key on the piano that sits just off center, claiming with a forthright agenda that his play is about love and longing, pretty much, and a whole lot of other stuff, but let’s not get bogged down in philosophical details. Let’s just “get this stupid thing started“, as the cast proclaims, gleefully smashing down the fourth wall with a swift and humorous non-Chekhovian kick.

Uncle Vanya’s characters feel trapped, stuck for all to see in their hopeless existences, mourning constantly their unsolvable losses, and holding tight deep and painful resentments for love lost and discarded. But can the same be said of the world that Posner (Chaim Potok’s The Chosen) has created in the here and now with the crew he has amassed? With a cast made up of seasoned pros pulling out every jocular witticism that can be found in the play, they all seem to be somewhat pissed by their situation, but ‘hopeless’ and ‘mournful’ doesn’t really seem to be the color of the day for these characters.

Pickles, portrayed with a detailed simplicity by the wonderfully talented Stacey Linnartz (Public’s Ghosting) is by no means “an acquired taste“, Her love for Iris is real, and her wide eyed enthusiasm for connection is endearing. She radiates lose, but also a desire to connect and engage in the beauty of the walk and her world. Dr. Aster, handsomely played with sexual magnetism galore by Michael Schantz (NYTW’s Othello) is a sad drunk one minute, and then an energetic charmer the next, especially when he has set his sights on the attractive Ella, portrayed with wild flirtatious appeal by Nadia Bowers (ATC’s Describe the Night).  Married to the Professor, nimbly played with dumb intelligence and wit by Austin Pendleton (Broadway’s Choir Boy), she seems angry with her situation, but not entirely upset or trapped.  It feels like she has the power and the edge to just walk whenever she wanted to, even though it wouldn’t be into the arms of Vanya, portrayed with a delightfully funny twist by Kevin Isola (Signature’s Our Lady of 121st Street). Babs, touchingly portrayed by the marvelous Barbara Kingsley (Broadway’s August: Osage County) seems content and bemused with a drink in one hand and a smartly wry comment in the other. The only one that almost fits the trademark is Sonia, earnestly played with a passion by Kerry Warren (Broadway’s The River) [a part previously played by Kimberly Chatterjee (PH’s Dance Nation)]. In her hopeless love for the Doctor, some of that Chekhovian pain resides, even if it is just conveniently sewed onto the edges of her not so homely persona.

The meta-theatrical fourth wall and the undercurrents are never really all that subtle, but said loud and clear for all to hear by this totally game and talented cast.  The pained interior is pretty much the same as the external in this production, a realization that Isola’s Vanya finally understands in one of the more touching moments of this funny laugh out loud play that never really gets under your skin. It clearly is smart in its humor, but deep subtext is nowhere to be found 0n that simply designed stage by Brittany Vasta (Signature’s Octet), with costumes by Christopher Metzger (Wheelhouse’s An Enemy of the People), lighting by Drew Florida (Ali Forney Center’s 1969), and sound design by Mark Van Hare (Kansas City Rep’s Brother Toad). Fleeting joy gets its blender buttons pushed with absentee glee by all, including Pickles’ puppets, with a pained, weighted indulgence masked as light depression for laughs. In that West End Pet Shop Boy’s Town, as directed with a quick and sharp eye for the joke by Jeff Wise (Wheelhouse’s Happy Birthday, Wanda June), the characters attempt through muddled and casual blocking to make sense of their surroundings and their lives. It’s all very funny, and for moments here and there, touching, but I couldn’t help but wonder what sucked so much in their lives beyond not getting exactly what they want, superficially and instantaneously. But with a show of hands, some questions thrown out to the audience, an answer was given that had surprising depth. The audience member clearly formulated what life was all about, and that answer, although not written by the playwright, did not suck.  It was actually pretty wise and deep, unlike most of this enjoyable silly play.