The New Group’s ‘one in two’ Demands Action 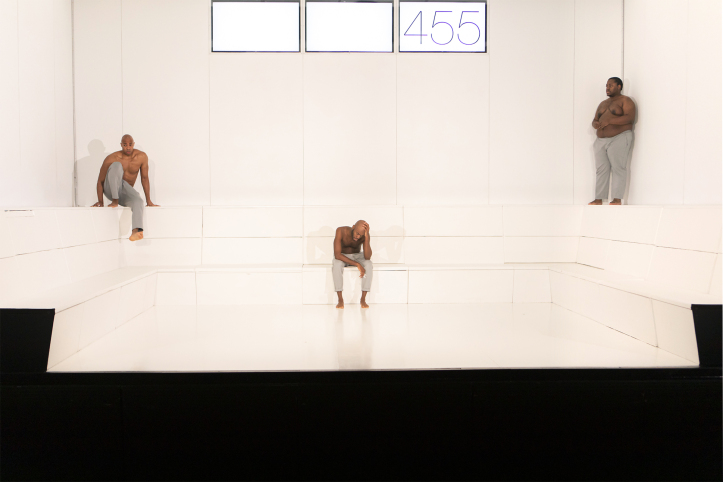 The New Group’s ‘one in two’ Demands Action

“Welcome to the Club“. It’s an absurdist invitation that weighs heavy, as heavy as that 2016 CDC study released which projected that “one in two Black gay and bisexual men will be diagnosed with HIV in their lifetime“. It’s a horrifying statistic, particularly startling as the numbers are generally more optimistic in NYC for other groups, namely White gay and bisexual men. So it makes sense, in the big picture, that on hearing this grim outlook for the future, playwright Donja R. Love’s (Fireflies) started work on a new play entitled one in two. Love’s anger and the frustration with it all is only componded by the desperate place he found himself in as the 10th anniversary of him being HIV+ approached about one year ago.  The resulting shame is scarely difficult to navigate, says Love, and the reality that this play slides down upon is heartbreakingly intense, but more importantly, it’s also a rally cry for action.

“Think of the level of trauma we go through“, Love states, so dropping these three identities down in what looks like a waiting room in the dystopian future, seems somewhat apropos. Designed by Arnulfo Maldonado (LCT’s The Rolling Stone), with stark lighting by Cha See (Barrington’s America V 2.1), and solid sound design by Justin Ellington (PH’s Heroes of the Fourth Turning), the holding cell for those being moved from one universe to another is perfectly crafted, nuetralizing the experience of becoming positive into something clinical and cold. The resulting visual, with the ever increasing count-up above, courtesy of a powerful video numerical system by Alex Basco Koch (Broadway’s Be More Chill), is to display the emotional rite of passage that ‘one in two‘ Black queer men will journey through. These three Black queer souls sit, waiting for something to begin and working out the odds that are not in favor of them. Not with an excited optimism for salvation, but with the troubled bored energy of the condemned. It’s a compelling beginning to a surprisingly intense exploration by The New Group, one that deeply resonates within, particularly because of the structure and the clear focus of playwright Love.

Directed with skill and passion by Stevie Walker-Webb (Public’s Ain’t No Mo’), the three are quickly seen as interchangeable, somewhat in the same way we are asked to look into ourselves as we also take a number upon entering the theatre at the Pershing Square Signature Center.  Will we be number ‘one’, or will we be one of the others? That is a question that the three contemplate.  They are assigned, but they revolt, braving the authorities that watch by asking the audience who will be the ‘one’.  Will it be Jamyl Dobson (NYTW’s The Seven), Leland Fowler (Rattlestick’s Novenas for a Lost Hospital), or Edward Mawere (Windy City’s Bootycandy) – all phenomenal in their gamed flexibility, and although they remain numbered and interchangeable, they do become real based on competitive acts and assignments. We don’t know the rules, nor what the outcomes are to mean in the grander scheme of things, but we applaud hoping it helps, when in fact, it becomes clear that it is something quite different than a popularity contest.

Once the roles and numbered t-cell-shirts are donned, courtesy of the wise costuming by Andy Jean (Vineyard’s Good Grief), and the safe word is agreed upon, the news and the aftermath are set in motion.  Some false starts and pauses delineate the problems to come, but it’s in the sequential scenes where the aloneness, pain, and the unfairness of it all register clearly. It’s as if the powers-that-be upstairs who control the space want the story to play out in the same tragic manner. Society seems to deem this appropriate, regardless which of the young men is assigned #1/Dante. This time though, the reins of the story are snatched away, and placed firmly and defiantly in the hands of the player(s). A new tale is attempted, one where suicidal ideation, plan making, and action is not the projected outcome. This is only if others, like what Love is attempting here with this clever and smart piece, are daring. And maybe this change in outcomes can grab hold, acting and helping to steer these souls away from that seemingly destined and heartbreaking ending.  The play gives shape and dimension to the invisible or ignored, driving with force and straightforwardness a situation that is untenable. ‘one in two‘ is a call to arms, and a call for action and involvement. The statistic shouldn’t stand, and this play deserves its airtime, forcing us to see inside a devastating ratio, and see how badly it needs to change.