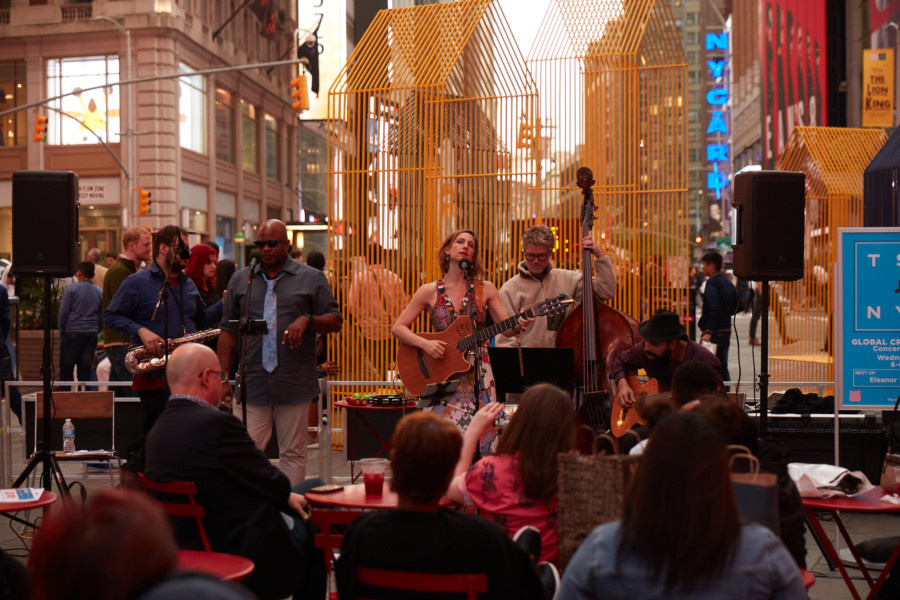 The Times Square Alliance continues its inaugural season of TSQ ⦁ NYC, over 70 hours per week of free summer music and performance programming throughout public plazas, amidst the lights and sounds of the iconic setting of Times Square, the Crossroads of the World.

Enjoy a bite and a drink during any of the above programming from TSQ MKT, a year-round culinary showcase of New York City’s most distinctive and unexpected food and retail offerings. 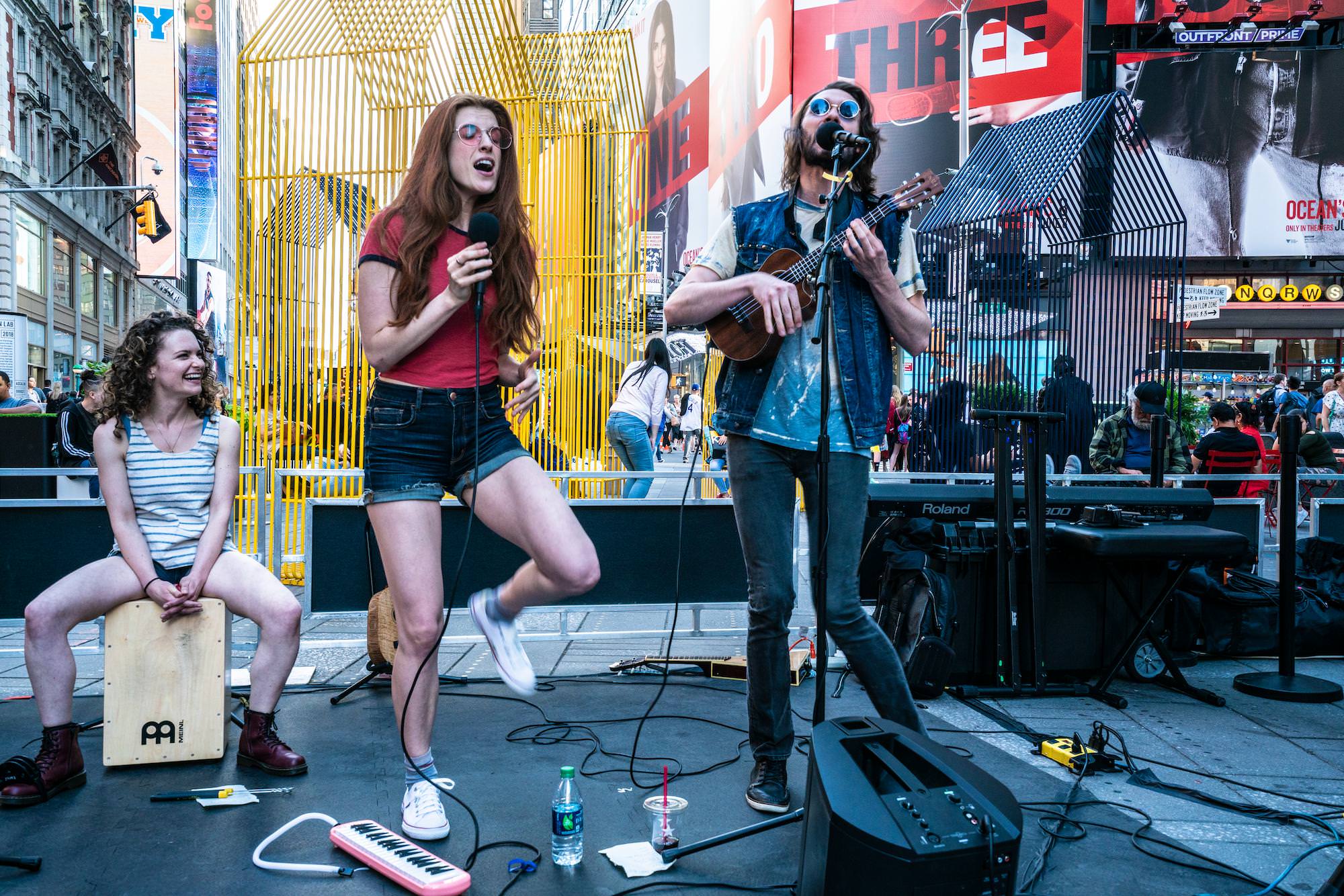 Broadway actors and composers give performances of their own original work. Concerts are hosted by Ben Cameron (host of Broadway Sessions, BroadwayCon, and The Broadway Cast podcast). 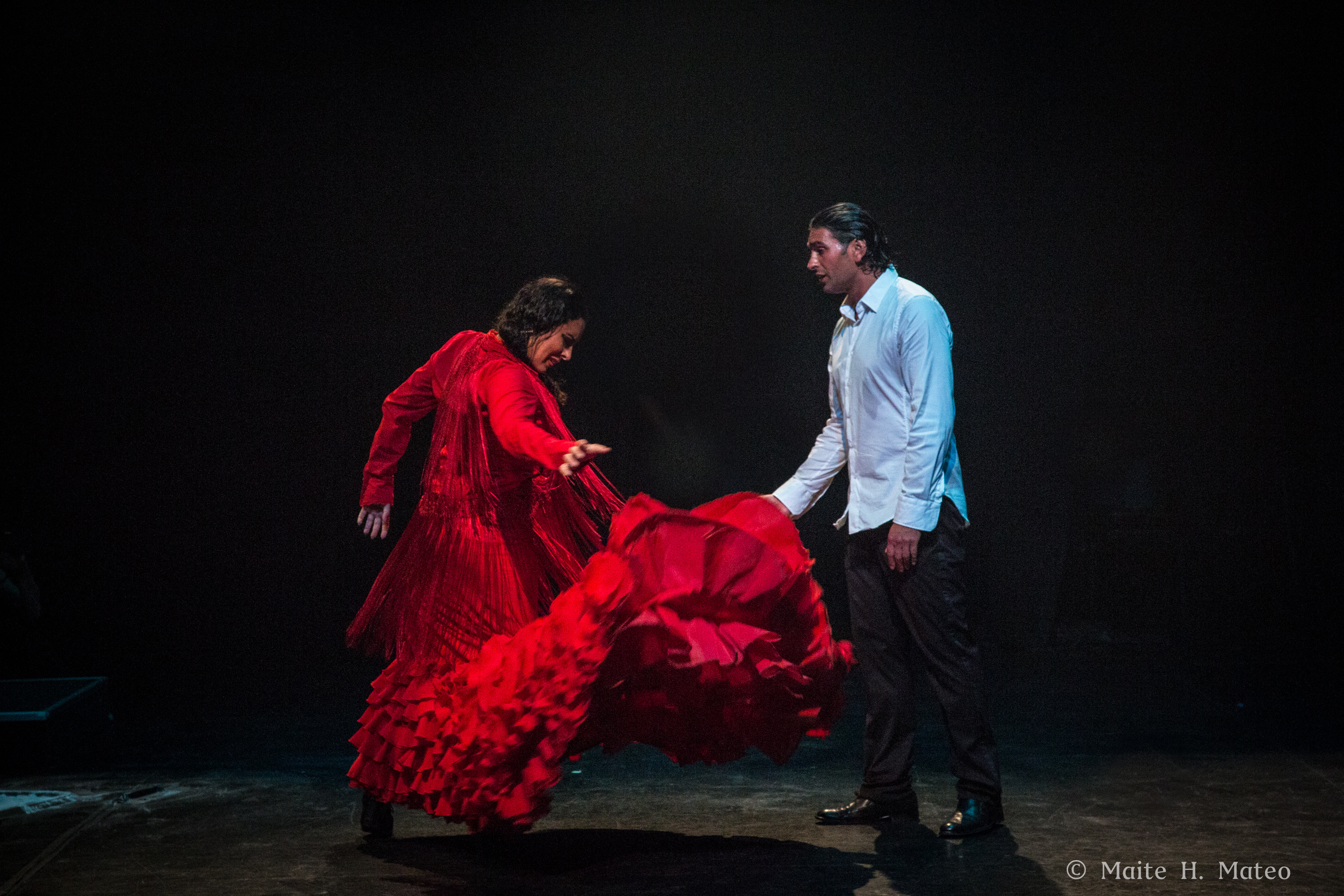 Sonia Olla is a bailaora of international prestige, and has toured as company member and soloist with flamenco greats such as Antonio Canales, Eva la Yerbabuena, Rafaela Carrasco, Merche Esmeralda, María Pagés, La Farruca, among others. She has performed in venues such as The John F. Kennedy Center for the Performing Arts, Carnegie Hall, Lincoln Center, Le Poisson Rouge, the Rose Nagelburg Theatre, Baruch Performing Arts Center, and Instituto Cervantes.

Flamenco singer Ismael Fernández grew up performing in flamenco festivals throughout the world with his internationally renowned family, “La Familia Fernández.” Throughout his career, Ismael has worked with flamenco legends such as Antonio Canales, Farruquito, Marina Heredia, El Torombo, Rafaela Carrasco, and conductor Gustavo Dudamel. For several years, he has been a featured company member of dancer Maria Pages. Ismael has performed at New York City Center, The John F. Kennedy Center for the Performing Arts, Carnegie Hall, and Walt Disney Concert Hall.

Together, Sonia and Ismael choreographed the worldwide 2015-16 “Rebel Heart Tour” for Madonna, and have created a number of shows together including Tablao Sevilla, Entretiempo, Tiempo Al Aire and Por los Caminos. They are one of the most highly recognized flamenco duos who sing, play and dance the music of Spain through their performances. 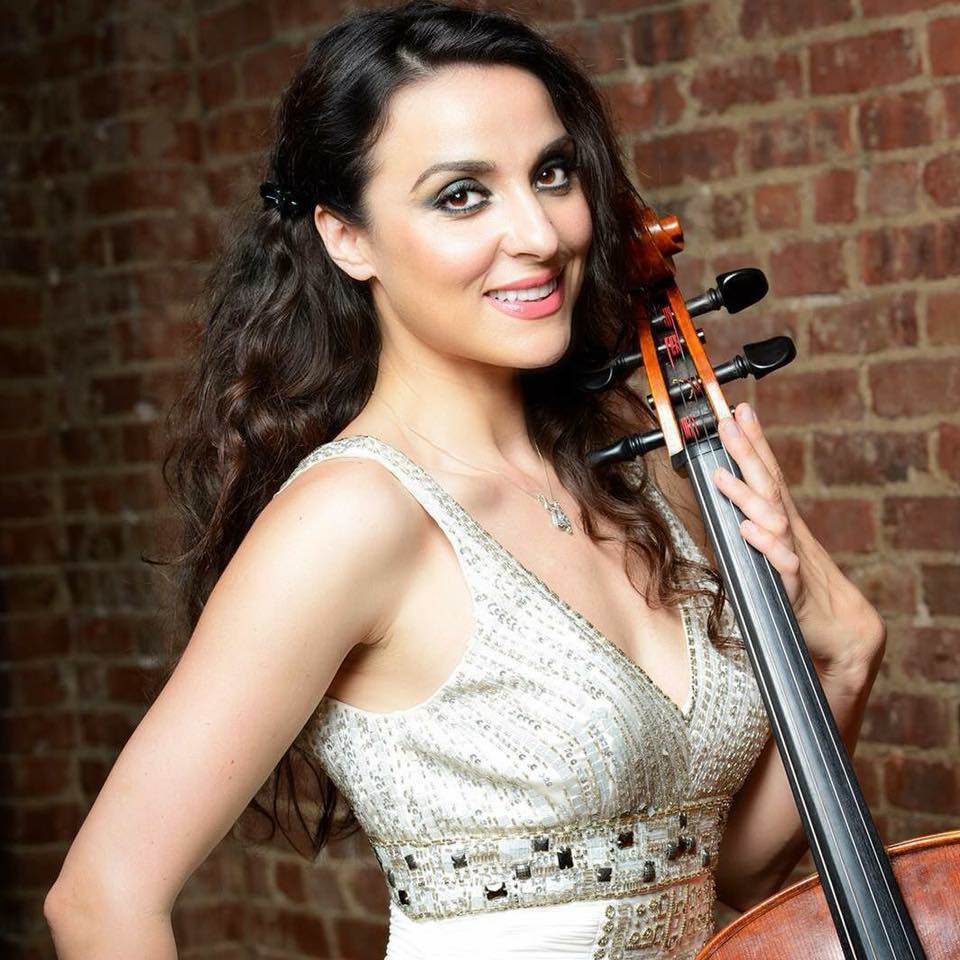 Gjilberta Lucaj is a New York City-based concert cellist with a critically acclaimed international career. A native of Albania, her solo career started at age 13, performing in Vatican City for Pope John Paul II. Her career has taken her to Mexico, China, South Korea, throughout Europe, the Caribbean and even to war-torn Afghanistan.

Nominated in 2016 by the President of Albania as one of the 100 most accomplished Albanian-Americans, Gjilberta has recorded and performed for Barack Obama and Joe Biden, Sony, Avatar Studios, Alicia Keys, Beyoncé, Ricky Martin, Coldplay, THALIA, IL DIVO and Jay-Z among other notables.

Violinist Anat Malkin Almani has performed as soloist, recitalist and chamber musician across four continents. She made her Carnegie Hall debut at the age of sixteen under the baton of Alexander Schneider. Orchestras with whom she has soloed include the Camerata Universidad Andrés Bello, Drammen Byorkester, Israel Chamber Orchestra, Israel Stage Orchestra, New York String Orchestra, Orquesta Filarmonica de Bogotá, Orquesta Sinfonica de Salta, and the Westchester Philharmonic, among others. An avid chamber musician, Ms. Almani is presently first violinist of the Gaia Quartet, an artist with the Hudson Chamber Music Series, and is a member of the prizewinning Malkin Duo.

Pianist Lynelle James has performed in Weill Recital Hall at Carnegie Hall, Alice Tully Hall, Steinway Hall, and in festivals in New York, California, Massachusetts, Canada, and Italy. Dr. James received her Doctor of Musical Arts in 2012 from the University of MIchigan and has released her debut CD for solo piano featuring works by Beethoven, Schumann, Scriabin, and Roslavets. She teaches on the faculty of the Manhattan String Orchestra and leads masterclasses at colleges across the United States. 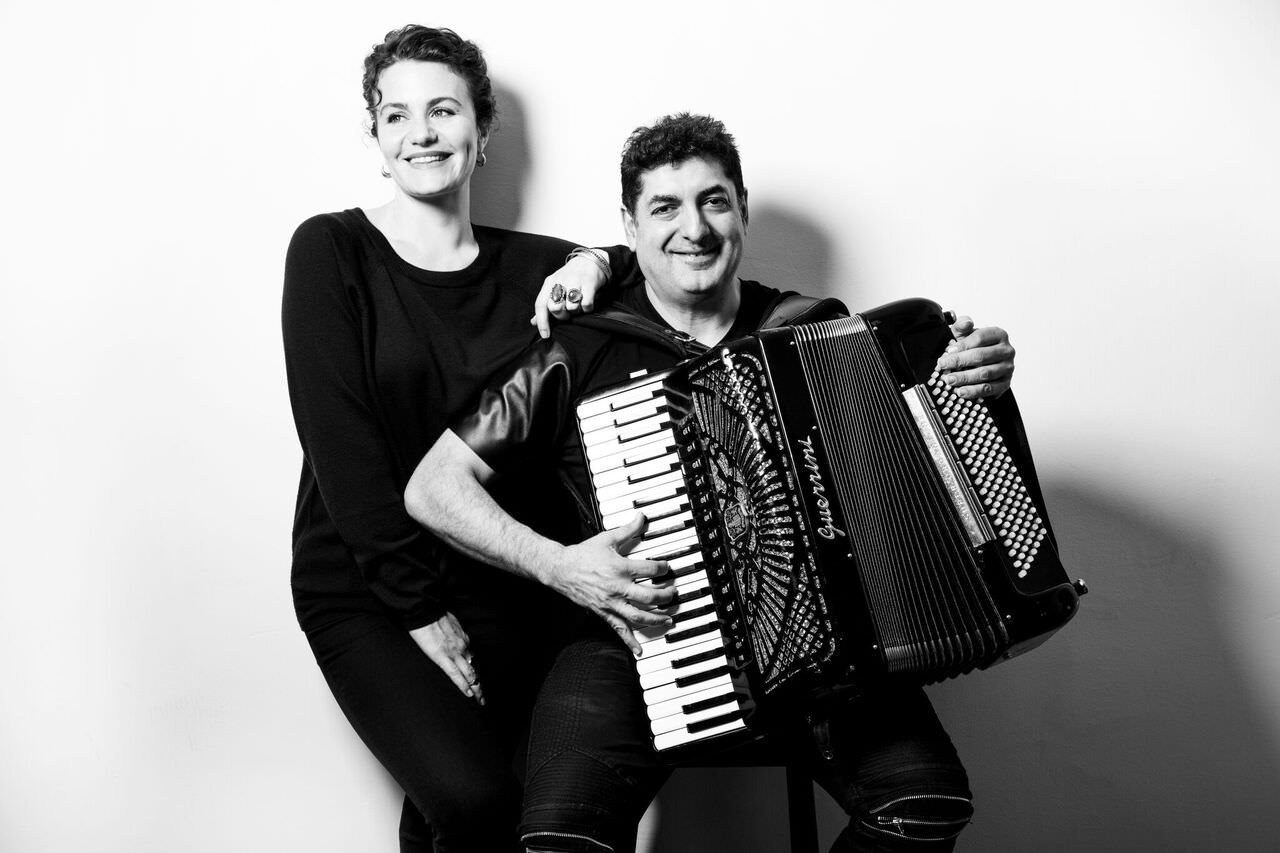 California-grown, Brooklyn-based vocalist Eva Salina is a groundbreaking interpreter of Balkan Romani songs. Eva’s rich, supple voice moves effortlessly through the intricate and demanding expression of Romani songs, intertwining vintage pop songs with her singular interpretations. A passionate activist for dialogue and mutual understanding, and an advocate for women in traditional and traditionally-based music, Eva is committed to a life of collaboration and evolving musical traditions. Her musical partner, Serbian/Romanian accordionist Peter “Perica” Stan is known for his playful innovation and soulful, intuitive improvisations.

with The Muse Brooklyn, home of ABCirque
Wednesdays from 4:00 p.m. to 6:00 p.m.
Broadway Plaza between 43rd and 44th Streets

Musicians from the MTA’s Music Under New York program—encompassing classical string musicians, jazz ensembles,
world music bands, folk and a cappella groups, and singer-songwriters that perform in approximately 30 locations
throughout the transit system annually—bring their talents above ground for
Times Square audiences.

The Times Square Alliance works to improve and promote Times Square – cultivating the creativity, energyand edge that have made the area an icon of entertainment, culture and urban life for over a century. Founded in 1992, the Alliance keeps the neighborhood clean and safe, promotes local businesses, manages area improvements and produces major annual events with partners including New Year’s Eve, Solstice in Times Square and Taste of Times Square. As the custodians of Times Square, the Alliance works every day to improve the quality of life for the neighborhood residents and businesses while driving economic growth in New York City. www.TSq.org