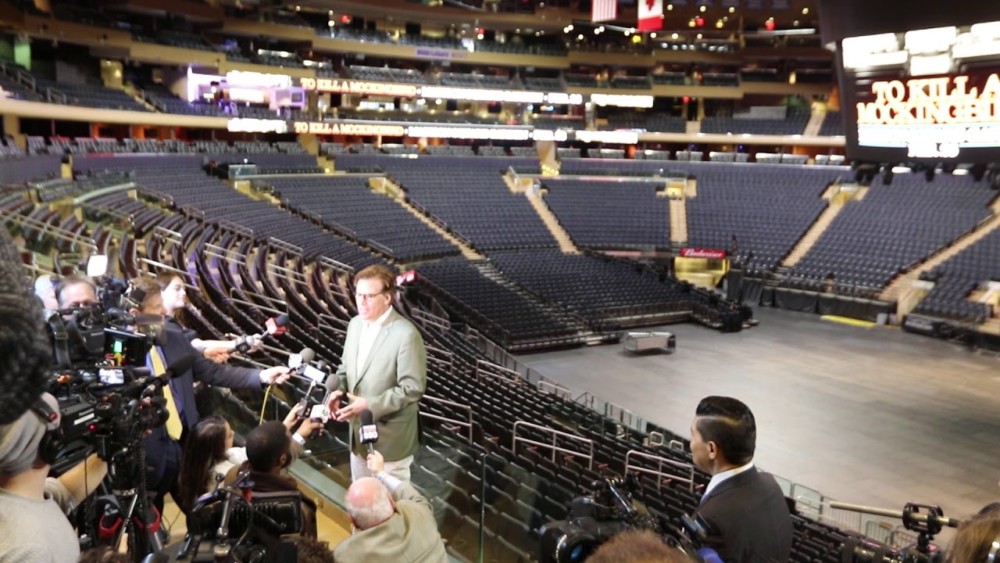 History is being made. Producers Scott Rudin and Barry Diller, with New York Mayor Bill de Blasio and Schools Chancellor Richard A. Carranza, are bringing the Broadway production of To Kill a Mockingbird, to Madison Square Gardens today. Aaron Sorkin’s new play, directed by Bartlett Sher, and based on Harper Lee’s classic novel, will become the first-ever Broadway play to perform at The World’s Most Famous Arena, New York’s Madison Square Garden, in front of approximately 18,000 New York City public school students. With the extraordinary support of James L. Dolan, executive chairman and CEO of The Madison Square Garden Company, this unprecedented, single-performance event will be entirely free to students of New York City Department of Education public middle and high schools from all five boroughs.

This event will mark the largest attendance at a single performance of a theatrical work ever in world theater.

To Kill a Mockingbird has not played to an empty seat, with capacity remaining over 100% for every performance.  As previously announced, To Kill a Mockingbird will launch its coast-to-coast National Tour on August 25th at the John F. Kennedy Center for the Performing Arts, starring Emmy Award winner Richard Thomas, and will begin performances in London’s West End at the Gielgud Theatre on May 21, starring BAFTA Award winner Rhys Ifans.  Emmy Award winner Greg Kinnear will succeed Mr. Harris as Atticus Finch on Broadway on April 21st.

In her first cabaret show in 2020, Karen Mason will ring in her birthday on Monday, March 30 at Feinstein’s/54 Below! It will be night of unforgettable music, stories, laughter, and joy, and perhaps a few surprises…..because you never know what will happen with this birthday girl! Karen’s all-new show will feature her favorite songs and arrangements, including “Help/Being Alive!,” “Lulu’s Back in Town,” “Now I Have Everything/Married,” including songs written by the songwriters she has known throughout her career,  such as Kander & Ebb, Amanda McBroom, Sheldon Harnick, and her husband Paul Rolnick,  as well as new music chosen specifically for this celebratory night. Birthdays are about spending time with your favorite people at your favorite place!  And there’s no place that Karen would rather be than with YOU and HER MUSIC on her special night. Don’t miss it!

The Clive Barnes Foundation announced today the finalists and date for the 10th Annual Clive Barnes Awards. Hosted by New York Post columnist and WOR radio personality Michael Riedel, the presentation of the annual awards recognizing excellence in theater and dance will take place on Monday, April 6, 2020 at 3:00pm at the Walter Reade Theater at Lincoln Center (165 West 65th Street), in memory of founder Valerie Taylor-Barnes.

In this year’s Theater Artist Award category, three of the four finalists made their Broadway debuts this season in roles that led to their nomination: Andrew Burnap, for his portrayal of Toby Darling in Matthew Lopez’s contemporary gay epic The Inheritance; Celia Rose Gooding as adopted daughter Frankie Healy in the Alanis Morissette musical Jagged Little Pill; and Christopher Livingston in the dual roles of James Bevel/Jimmie Lee Jackson in Lincoln Center Theater’s The Great Society. Mr. Livingston is also recognized for his work in Roundabout Underground’s production of Selina Fillinger’s Something Clean. Sophia Anne Caruso, who recently starred in Beetlejuice as Lydia, the young girl who summons the title demon, rounds out the quartet of Theater Artist finalists.

Two members of the New York City Ballet corps de ballet have been selected as finalists for the 2020 Dance Artist Award. India Bradley, who joined the corps in August 2018, is joined by 2019 Princess Grace Award winner Roman Mejia. American Ballet Theatre’s Aran Bell, who was recently promoted to soloist following two seasons in the corps de ballet, and Twyla Tharp Dance’s Kellie Drobnick, soon to be seen in the Steven Spielberg remake of West Side Story, complete this year’s finalists in the field of dance.

All finalists receive a cash prize of $500, while the winners of each category will receive an award of $5,000.

The finalists and winners for the Dance and Theater Artist Awards are chosen by the Selection Committee, which is comprised of a panel of critics and performers in each field. This year’s Selection Committee for the Clive Barnes Awards includes: William H. Ausman, Diana Byer, Pia Catton, Jenny Chiang, Frank DiLella, George Dorris, Erik Forrest Jackson, Patrick Pacheco, and James Sutton.

Paper Mill Playhouse (Mark S. Hoebee-Producing Artistic Director, Michael Stotts- Managing Director), recipient of the Regional Theatre Tony Award, is proud to announce an expansion of the theater’s award-winning Theater School with the lease of a storefront building in Downtown Millburn. The new space, totaling 2,500 square feet, is at 20 Main Street. This is the first property extension of the theater since 1996 and the first expansion of the theater’s footprint into Downtown Millburn. This expansion is a result of a board-approved strategic plan to move Paper Mill Playhouse forward, reimagining the Millburn theater as the center for musical theater in America.

The official ribbon cutting for the new space will take place on Wednesday, March 4 at 9AM on site at 20 Main Street, Millburn. The community is welcome to visit the new studios on Saturday, March 14 for an open house featuring free classes for students ages 6 to 15. Free class spots during the open house must be reserved in advance and are first come, first served with an online registration at https://tinyurl.com/PMPStudios. The theater’s spring session of classes kick off the week of April 20 with classes for all of life’s stages. For more information on upcoming Paper Mill Theater School offerings visit www.PaperMill.org/Education.

Paper Mill Playhouse will host two ‘Master Classes’ to celebrate the studio opening and the 25th Anniversary of the Rising Star Awards. Two former Rising Star winners will return to Millburn to share their expertise with students.  On Monday, March 30 at 6:30pm, Broadway performer Jelani Remy (Broadway’s Ain’t Too Proud, The Lion King, Smokey Joe’s Café) will present a dance workshop for ages 11 to 15.  On Monday, April 6 at 6:30pm, Broadway performer Natalie Weiss (Emojiland, American Idol, You Tube’s Breaking Down the Riffs, Broadway’s Everyday Rapture) will present her ‘Breaking Down the Riffs’ vocal Master Class.  For Master Class times, prices and to register, emailclasses@papermill.org. Space is limited.

Suzanna BowlingJanuary 12, 2022
Read More
Scroll for more
Tap
Dana H. Speaks Out at the Vineyard, Recorded and On Point
Theatre News: Zoe Caldwell, The Minutes, Lillias White and Opening Night of All the Natalie Portmans at MCC