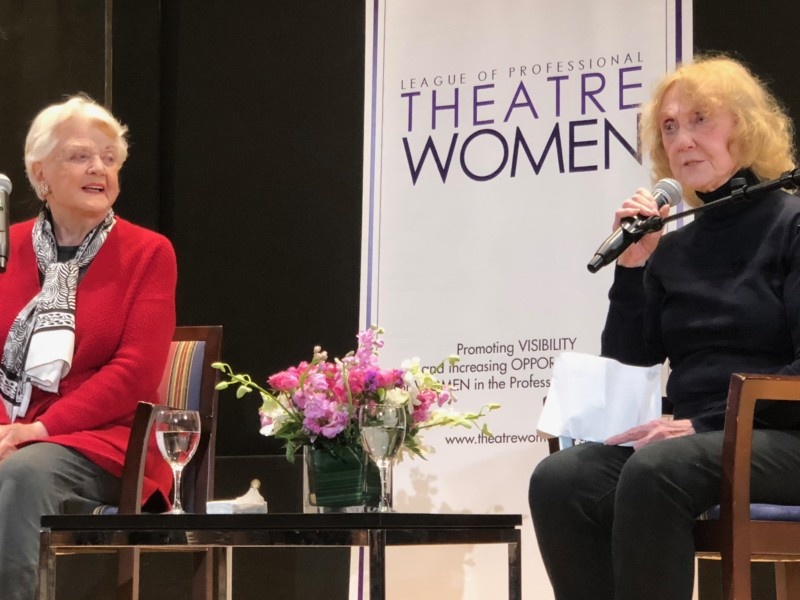 As part of the 37th season of The League of Professional Theatre Women’s Oral History Projects, five-time Tony winner Angela Lansbury was interviewed by Irish Rep’s Charlotte Moore, to a standing room only event at the Bruno Walter Auditorium at the New York Public Library for the Performing Arts at Lincoln Center.

Lansbury talked about her 75 years in the business. The daughter of Irish theater actress Moyna MacGill and Edgar Lansbury, a politician, the family was evacuated to the U.S. during the London Blitz. Lansbury’s started acting at the age of nine with her sister Issy and while working at Bullock’s department store, co-scripter John Van Druten, met the young Lansbury. They were looking for someone to play the saucy maid in Gaslight. Druten arranged for a screen test. Four days later, she was cast in her first film role, which gained her an MGM contract and her first Oscar nomination. Just 17 on her first day of shooting, Gaslight, they had to wait until she was 18, to shoot some of the scenes in which she smoke. Ingrid Bergman and Charles Boyer were incredibly kind to her and she immediately had to raise the bar.

Ms. Lansbury’s motto is “You can do it,” and she means it. While listening to her days at MGM, you got the feeling that the studio days were the best and not so best years of her life. “We called it the Factory” she stated. “I was a utility actress, as far as MGM was concerned. They could put me into almost any role, and I would act it.”

The regal 94 year-old counts as her friends Judy Garland, Orson Welles, Richard Burton, Katharine Hepburn and Spencer Tracy. Hepburn was a totally unique woman, in every respect. I was kind of awed by her, a bit frightened by her forthrightness and ability to manage her life and her career in exactly the way she wanted to.

Bea Arthur was one of her best friends. The pair first met during the 1966 stage production of Mame, in which they both starred. Elizabeth Taylor was a life long friend after the two met on the set of 1944’s National Velvet. At 36, she played the mother of 26-year-old Elvis Presley’s in “Blue Hawaii” and called him a nice young man. He was fit and looking good.

Lansbury made her stage debut in Stephen Sondheim Anyone Can Whistle. She later went on to work with Sondheim and Hal Prince in A Little Night Music and Sweeney Todd. She talked about when working for Prince you had to fit yourself into his box. That he saw the show before you even got there and you needed to mold yourself to him. The role she would most like to re-do, is Mrs. Lovett in Sweeney Todd. She would like add some ridiculous things and let her comedic impulses out.

When asked about her process she stated: “It’s terribly important to get out of yourself and into that character. Leave yourself at home.”  Ms. Lansbury takes her career very seriously and loves what she does. it is evident when you hear her talking.

She will be playing Lady Bracknell in The Importance of Being Earnest for the Roundabout Theatre Company. This one night only benefit happens this coming Monday November 18th at 7:30PM at the American Airlines Theatre. This role seems a natural for Ms. Lansbury but she has only done the role once before, again for one night.

Known for her 12 years as TV sleuth Jessica Fletcher on Murder, She Wrote, Lansbury work in Gaslight, Picture of Dorian Gray, and The Manchurian Candidate, all brought her Academy Award nominations. Lansbury received Tony Awards for her performances in Blithe Spirit, Sweeney Todd, Gypsy, Dear World and Mame. She also graced the Great White Way in A Little Night Music, Deuce,Hotel Paradiso, A Taste of Honey, Anyone Can Whistle, The King and I and A Little Family Business.

The League of Professional Theatre Women’s Oral History Project, showed that not only is the incredible Ms. Lansbury a remarkable talent, she is also generous and giving. A remarkable night was had by all.