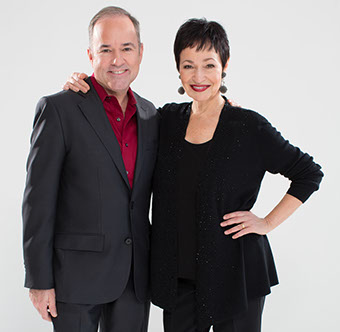 Lynn Ahrens and Stephen Flaherty first Broadway musical was Once on This Island, and was nominated for 8 Tony Awards including Best Musical, Best Book and Best Score. The London production won the Olivier Award (London’s Tony) for Best Musical in 1995. The show was revived in 2017 and again nominated for 8 Tony Awards, winning for Best Revival of a Musical. That year the power duo had two critically acclaimed musicals running on Broadway: Anastasia and the revival of Once On This Island. The cast recording of the revival was nominated for the Grammy in 2019.

Lynn and Stephen met at the Lehman Engel BMI Musical Theatre Workshop in 1983, and their first big New York show was the musical farce Lucky Stiff, which premiered Off-Broadway at Playwrights Horizons in 1988.

In 1992, Ahrens and Flaherty wrote the musical My Favorite Year, A Man Of No Importance (2002, with a book by Terrence McNally), Dessa Rose (2005) and The Glorious Ones (2007.) Flaherty was nominated for Outstanding Music by the Drama Desk Awards on all three of these shows.

Rocky, Little Dancer, had its west coast premiere at Seattle’s 5th Avenue Theatre in March 2019. Flaherty and Ahrens are currently working on a musical adaptation of James Agee’s Pulitzer Prize-winning novel A Death In The Family and Pulitzer Prize winning play All the Way Home by Tad Mosel [12] with Ragtime director Frank Galati, who is adapting the text and directing. The new musical, titled Knoxville, will have its world premiere at the Asolo Repertory Theatre, which commissioned the piece, in April 2020. It will star Jason Danieley as Author.

Ahrens and Flaherty are a part of “Artists in Residence Songs Dealing With These Times” with a brand new song “Calle Santa Barbara” sung by Rachel Bay Jones. T2C sat down with this iconic duo to learn more.

The video was done by the wonderful Magda Katz.