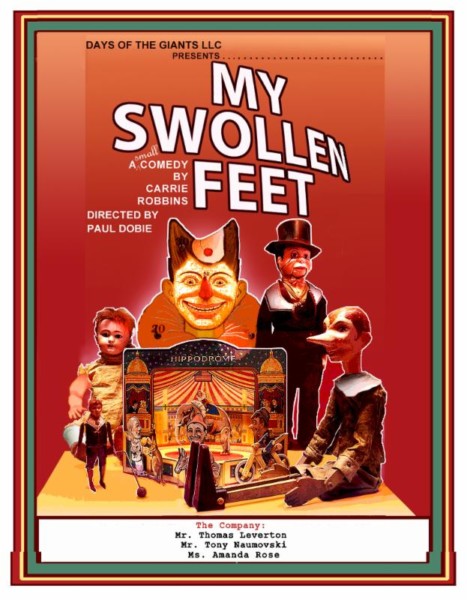 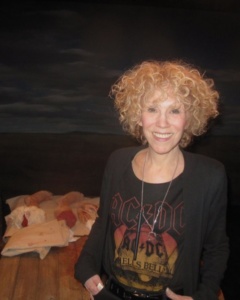 Backstage comedy My Swollen Feet by designer/playwright Carrie Robbins is the story Robbins didn’t have the courage or insight to tell until now.

Struggling young costume designer Zoey Parnes gets the big break she’s been dreaming of when theatre legend Jason Gascoigne III summons her to interview for his new Broadway musical. Two problems: A colossal cold is making it hard for Zoey to drag herself out of bed, and Gascoigne is a legendary eccentric whose curious ways of working could prove her undoing. A one-act, My Swollen Feet received early development with the 29th St. Playwrights Collective.

Award-winning costume designer/playwright Robbins’ play Sawbones & The Diamond Eater (HERE Theater) received 6 NYITA nominations (from the NY Innovative Theatre Awards), more than any other production in 2014. Robbins’ Le Wedding Dress reached the semi-finals in NYNewWorks 2015 Festival, and her play The Actress was a finalist in last year’s Summerfest Theater Festival.

My Swollen Feet is directed by Paul Dobie who has been the assistant director of several musicals on Broadway, including Once, Cabaret, and Wicked, and was the Associate Director of Broadway and National tours of Tony award-winning Thoroughly Modern Millie. Other Broadway credits include: Martin Short: Fame Becomes Me (Assoc. Director) and the Tony Award-winning revival Glengarry Glen Ross (Ass’t. Director). His direction of Unitard is currently running at Joe’s Pub through Christmas. Mr. Dobie directed Le Wedding Dress and The Actress.

The role of Zoey Parnes is played by Broadway actor Amanda Rose (Wicked, Holiday Inn). Rose has also been seen in the B’way/Nat’l tours of Dr. Dolittle (starring Tommy Tune) and Oklahoma! (Laurie). Regional credits include Gypsy (Louise) and Sunset Blvd (Betty) at Pittsburgh Civic Light Opera, 9 to 5 (Judy) at the Walnut Street Theatre, and The Full Monty at Fulton Opera.

Versatile character actor Tony Naumovski (Orange Is The New Black) plays Jason Gascoigne III. Naumovski has over 100 theatre, film, and TV roles to his credit including Law & Order SVU, and Person of Interest; he will soon be seen in the European reboot of HBO’s award-winning In Treatment.

Rounding out the cast is Thomas Leverton playing a gaggle of quirky characters including the imperious grande dame Angela Thornbry who is not amused by Parnes’ early wardrobe designs. Leverton’s theatre credits include Red (TheatreWorks Hartford) and many award-winning Shakespearean roles, most recently the ATA’s unedited version of Richard 3. Leverton will next play Viola in Orlando Shakespeare’s All-Male production of Twelfth Night in rep with Marlowe in Shakespeare In Love. 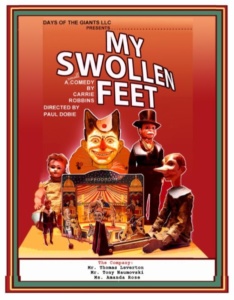 All performances will be held at the Hudson Guild Theatre, 441 W. 26th Street (between 9th & 10th Avenues).

Tickets are $23 at the door or through Brown Paper Tickets:   http://www.brownpapertickets.com.event/2969863

My Swollen Feet is an Equity approved Showcase presentation.

Produced by Days of the Giants LLC www.daysofthegiants.com