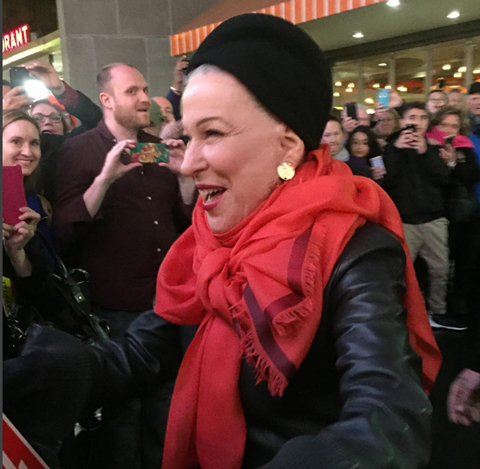 The NYPD installed barricades along 7th Avenue and concrete blocks at crosswalks on side streets.  They will be and are being laid out as follows: from 42-45 on the west side and from 45-47 on the east side.

This weekend the Ninth Ave International Food Festival will be held Saturday and Sunday May 20-21 from 10 – 6. The Festival takes place from West 42nd to West 57 street. Large crowds are expected.

Hello, Dolly! and Bette Midler will appear on CBS Sunday Morning May 21.

Ghostlight Records will release the Original Broadway Cast Recording of the new musical War Paint – starring two-time Tony Award winners Patti LuPone and Christine Ebersole – in digital formats on Friday, May 26. The CD version will be available online and in stores in mid-July. The musical, is currently running at the Nederlander Theatre (208 West 41st Street), and  is nominated for four 2017 Tony Awards, including “Best Actress in a Musical” for both of the leading ladies. Starting today, May 19, customers that pre-order the album via Apple Music will immediately receive the second single “If I’d Been A Man” – the stirring duet between LuPone and Ebersole – in addition to the previously available single “Back on Top.” A special video teaser featuring the album’s first single “Back on Top” is available online here. For more information on the album, please visit www.sh-k-boom.com/war-paint.

The Original Broadway Cast Recording of Amélie, A New Musical by Warner Music, is available digitally to purchase or stream at https://w.lnk.to/amelie. The CD will be released on Friday, June 9, 2017 and is available to pre-order.

Oh, Hello on Broadway will Debut on Netflix on June 13.

Chita Rivera is a living Broadway legend and a two-time Tony winner who originated the roles of Anita in “West Side Story“, “Rosie in Bye Bye Birdie,” Velma in “Chicago,” and appeared in the original casts of “Guys and Dolls,” “Can Can,” “Jerry’s Girls” and many others. Producer Mark Cortale announced recently that she will be coming to Philadelphia for one show only on Saturday, June 3 at 8:00 PM.. SiriusXM radio star Seth Rudetsky joins her as pianist and host for an evening of unforgettable songs and conversation.  The format of the evening will be a seamless mix of intimate behind-the-scenes stories from one of Broadway’s biggest stars  – prompted by Rudetsky’s insightful, funny, revealing questions – and Rivera singing some of the biggest hits from her musical theatre repertoire. This is a spontaneous evening of hilarity and show-stopping songs not to be missed.  For tickets and information please visit www.KimmelCenter.org or call 215-893-1999.

Tony Award Productions and Broadway Records have announced the first ever Tony Award® Season compilation album to be released on CD and digitally at most major music retailers including Barnes & Noble and iTunes/Apple Music on June 9, 2017.  The CD is now available for pre-order at www.BroadwayRecords.com, www.TonyAwardsStore.com and www.Amazon.com.

The View UpStairs – the provocative new musical written by Max Vernon, directed by Scott Ebersold and choreographed by Al Blackstone – is thrilled to announce the Original Cast Album will be released by Broadway Records.  Produced by Michael Croiter, the original cast recording is now available for pre-order at BroadwayRecords.com.  The album will be released on August 11.