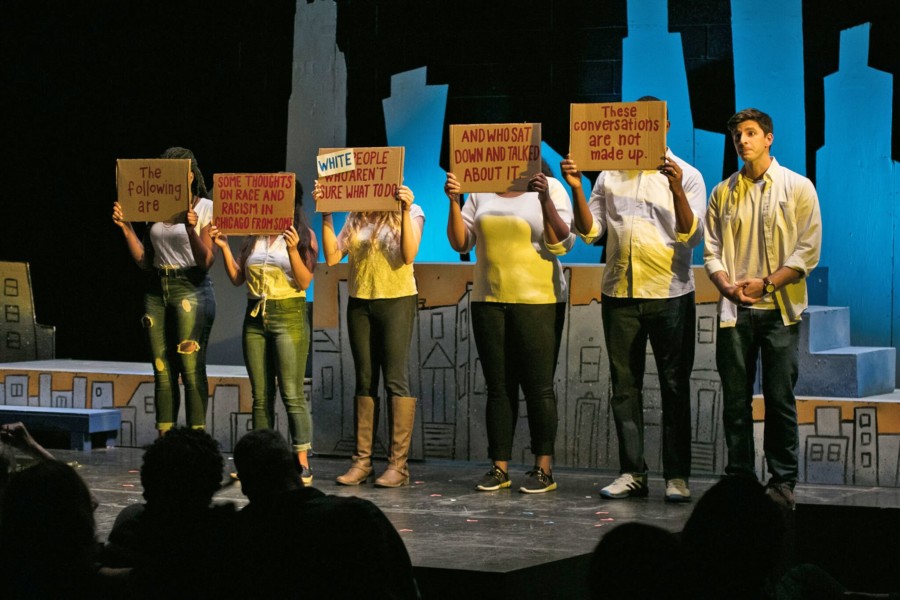 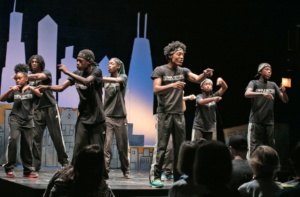 Blending community activism with art, youth and a truly unique storytelling vision, Collaboraction and the Chicago Park District present Peacebook 2017 to the greater Chicagoland community. This free, city-wide festival features vignettes of dance, visual and performance art, theater, music and more, in just seven minute intervals, all with the ambitious hopes of cultivating peace in Chicago. Initially launched with a one-day premiere of all 24 Chapters on Saturday, August 26, 2017 at the Goodman’s Owen Theatre, Collaboraction’s Peacebook 2017 was billed as “Social Contemporary Theatre” protesting 200 years of systematic racism through the performing arts. This concept may sound a little daunting, however over 200 artists have combined their collective talents to be involved with this project. I was impressed by the array of people in the audience, from grandparents to children, and everything in-between.  I attended just a part of the premiere of this city-wide touring festival and the crafty appetizer I experienced certainly whetted my appetite for more. Of the fifteen world premiere shorts, here are the highlights from what I was able to enjoy. 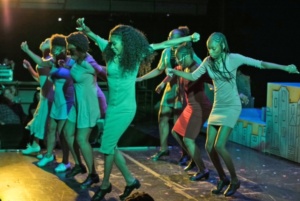 “EmpoWOMENt” featured eight young women, all vigorously tap dancing to selections from Beyonce’s “Formation.” Originally devised by Bril Barrett the acclaimed founder of M.A.D.D. (Making a Difference Dancing) this number featured choreography as hot as the “sauce in her bag.” This was certainly an energetic and inspired way to start the evening. 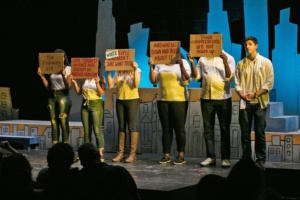 “Dear Masculinity” by Eneale Pickett and directed by Rain Wilson featured five men, one sporting a tee-shirt proclaiming “All Men Are Sexist” writing letters to express their frustration and disappointment to the dated, traditional definition of masculinity.  In today’s modern world of sexually fluid gender types, the ridged confines of “masculinity” proved an obstacle each troupe member endured and eventually overcame. 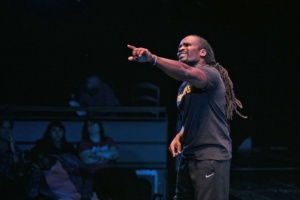 “Some Thoughts On Race and Racism in Chicago From Some People Who Aren’t Sure What To Do And Who Sat Down And Talked About It” written and directed by Sarah Illiatovitch-Goldman, featured a troupe of six actors reading real quotes from white people discussing racism. Shining the uncomfortable light on “White Supremacy Culture” and sharing the Martin Luther King quote “Shallow understanding from people of good will is more frustrating tan absolute misunderstanding from people of ill will. Lukewarm acceptance is much more bewildering than outright rejection.” Proving simultaneously comical and uncomfortable to the audience attending was the point of this piece. I will add, they nailed that target succinctly. 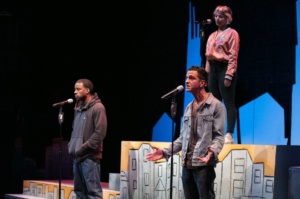 “The Making of an Example Setter” featured former Jesse White Tumbler and member of the U.S. Olympics team, Sir Taylor, back-flipping off the main stage of the Owen. Sharing his tale of self-actualization and self-esteem in the face of extraordinary personal odds, Director Anthony Moseley and Taylor ended the piece with audience participation.  As the houselights came up, the auditorium was filled with a chorus of “Be The Best” and “Set The Example.” 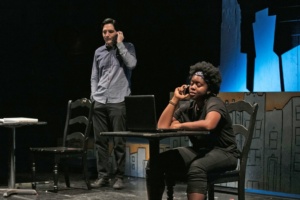 “Thread” Twin Peaks actor David Dastmalchian and ensemble member, Aisha June, devised a highly relatable segment about social media infighting versus real world, face-to-face communication. Stressing the importance of getting off our self-important soap boxes and telling the awkward truths to and about each other rang surprisingly true and hit very close to home. Sparking legitimate conversation as opposed to the self-assured platitudes of social media self-righteousness was, for me, the highlight of the showcase and the evening’s strongest piece.

“17 to (New) Life” was crafted by GQ and Tyrone Taylor and featured a trio rapping about an immigrant cab driver in the wrong place at the wrong time and the gang banger who shot him during an attempted burglary. Luckily, they both lived to tell the tale of forgiveness against insurmountable odds and incarceration.

Collaboraction Peacebook 2017 may not provide all of the answers about race relations that unfortunately plague both Chicago as a city, as well as our country as a whole, but it does shine a light and opens a necessary dialog. More importantly, this concept provides a creative and encouraging outlet for all of the people involved. Challenging, provocative, at times unconformable and unflinchingly honest, Executive Artistic Director Anthony Moseley and his talented Collaboraction troupe are forging necessary steps, blending the arts with healing. I cannot think of a more impactful way to begin to “Make America Great Again,” one step at a time.