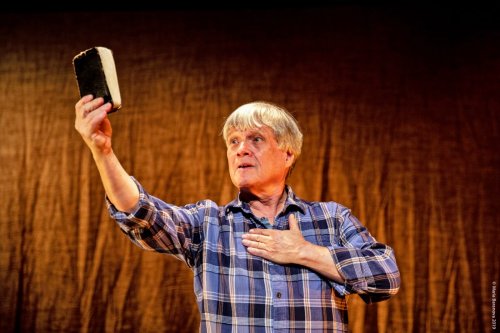 Ken Jennings’s The Gospel of John, now onstage at The Sheen Center is preaching the word of God. Best known for originating the role of Tobis in the original Broadway production of Sweeney Todd, Jennings has memorized the entire gospel. That in itself is rather amazing. What started out as a prayer is now a theatrical piece, however it is not exactly theatrical.

In a flannel shirt and jeans, Jennings, looks like a backwoods preacher, with his sparkling blue eyes. In this day and age where Lucifer is being given prominence with his own TV show and shows like “Sabrina The Teen Age Witch”, talking about how Satan is good and God is evil, it is a blessing to hear God being given equal standing. There is power in those words.

In the book of John comes the phrases “For God so loved the world,” “I was blind and now I can see,” “In my father’s house are many rooms,” “The truth shall set you free,” and “My kingdom is not of this world”. There is nothing so powerful as when Jesus washes his disciples’ feet, knowing he is to die.

There is much narrative in this gospel and Jennings speaks John’s words without characterization or a new take. He pleads John’s case with heartfelt passion. He means what he says and he is there to make you understand its meaning.

John Pietrowski’s direction is straightforward, again this is more of a one man’s testimony of his faith. What was theatrical was the sound design by M. Florian Staab. This gave us the sounds of the sea, the marketplace and varies crowd scenes.

The last line is “This is the disciple who bears witness to these things,” and in truth there could be no better last line for Jennings or this reading.

The Gospel of John: The Sheen Center, 18 Bleecker St. through Dec. 29

Suzanna BowlingJanuary 12, 2022
Read More
Scroll for more
Tap
Get in The Holiday Spirit With the Cast of Rodgers & Hammerstein’s Oklahoma!
Move It, Move It to Madagascar