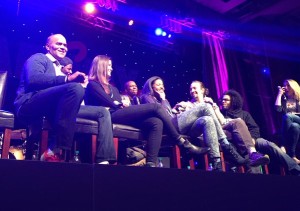 Ms. Ross asked the cast how they first came to be involved in Hamilton. While working on In The Heights, Miranda  pulled Jackson aside backstage and told him what he was writing. Leslie Odom, Jr. got an email from Lin titled “Octo-BURR-fest.” Phillipa Soo was asked to come to a table read. Jonathan Groff  got the role when Brian D’Arcy James’s show Something Rotten, fast-tracked to Broadway. The rest of the cast well had to audition. Phillipa Soo, stated the best things she hears at the stage door is “Thank you for representing Asian American women.”With the closing of Allegiance this was a nice sentiment.

Impromptu freestyle rapping happened from the cast but it was when the audience rapped back that the love was felt.

Suzanna BowlingAugust 5, 2022
Read More
Scroll for more
Tap
Ben Vereen Is About to Wow at Feinstein’s /54 Below
Real Talk and Song With Melissa Erico: Part 1