He Says: Happy Talk Deflates But Ireland Floats Up High 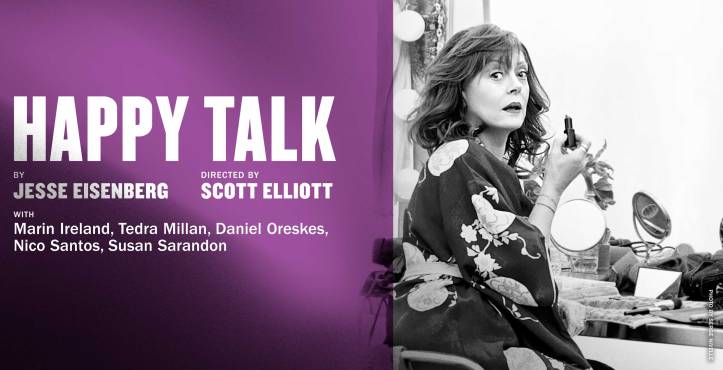 He Says: Happy Talk Deflates But Ireland Floats Up High

The hopes are high when entering the New Group‘s production of Happy Talk, a new play by actor and writer Jesse Eisenberg (The Revisionist, The Spoils), and I’m super excited to see Susan Sarandon back on stage, but almost more thrilled to once again get a chance to witness the magnificent work of Marin Ireland, who destroyed us all with her breathtaking work in both ATC’s Blue Ridge and CSC’s Summer and Smoke this past year. She is truly a gift to the NYC stage, and one I will try to never miss in the future. Sarandon, a gifted film actor, destroying us all in “Dead Man Walking” (1995) and “Thelma and Louise” (1991) hasn’t performed on stage in NYC since Exit the King in 2009 when she rocked the Eugène Ionesco’s absurdist drama at the Ethel Barrymore Theatre, alongside Geoffrey Rush (who won a Tony Award for his performance), Andrea Martin, and Lauren Ambrose, so I was holding my breath to see what brought her back to us.

This time around on the Griffin stage at the Pershing Square Signature Center, Sarandon’s star power grabs hold and presents the petty narcissism and self-centeredness of the off-putting central character, Lorraine.  The delusional woman sees herself as a gifted artist and musical theatre actress, discussing the rehearsal process as if she’s a star-player working on a celebrated production of the classic South Pacific. But alas, we soon learn that this is community theatre, and we can venture a guess what kind of woman this actress truly is. “Darling, I’m an artist. We live in the shadows, we bend the rules.” she states, talking endlessly about her delusional accomplishments to her motionless husband, Ronny, deviously well played by Nico Santos (WB’s ‘Crazy Rich Asians‘) who seems to have decided that it is best to not listen, remain still, have a drink, and play (almost) dead. It might be the best action of them all; to avoid and dismiss the endless prattle that leans sometimes towards passively vicious and demeaning, that is, if anyone is actually listening. It’s a startling piece of writing, her first monologue, deftly creating a character we would most likely want to avoid at all costs, smiling simply as we too try to vanish from her eyesight, which might, in fact, be a small part of the problem with the play. We inch away from her, in the same hesitant manner that she inches, reluctantly, towards the door of her ailing mother, an unseen sickly character that if it was up to Lorraine, should hurry up and die. We want to avoid her, move away from her smiles and inane chatter, and sadly, Happy Talk never gives us a good enough reason to want to lean back in.

Wisely for her character, Lorraine has hired a captive audience, the fiery yet sweet-natured Ljuba, a live-in care giver for her sickly mother. This well crafted character, the illegal immigrant worker from Eastern Europe, is played to heightened perfection by the magnificent Ireland, finding the kind happiness amongst the uncomfortable pain and helplessness of her existence. She’s a woman desperate to fit in, and devastated to find out she doesn’t and may never, but tries valiantly to find the joy and companionship in those around her. It’s a compelling and fascinating conceptualization, making these two women who live in the Happy Talk world of positivity and looking on the bright side of things, but have really nothing in common in the way they interact in the world. “This scene isn’t about you” Lorraine states emphatically. Ireland’s Ljuba strives to survive the heavy weight around her neck, while Saradon’s Lorraine does it to make her existence feel more important, even if it is at the cost of those around her.

As directed by Scott Elliott (TNG’s The True, Good for Otto) with an off balance energy and focus, Lorraine’s delusional narcissistic vantage point sours all yet never feels fully formatted and believable. Sarandon can’t seem to find the heart or the pain that should at least make us interested or curious about her self interest and haughtiness. Her daughter, the snide and dismissive Jenny, played with a strong sense of purpose by Tedra Millan (PR’s The Wolves) sees her pretty clearly though, although as Jenny is quite the horrific spoiled brat herself, her observations are difficult to emotionally get behind. It is somewhat satisfying to watch Jenny get a lashing from Ljuba, but seemingly pointless in the long run.

One has to wonder why fellow community theatre actor, Bill, played to the gay heavens by Daniel Oreskies (Broadway/LC’s Oslo) allows himself to be pulled into the tidy mess that lives inside this conventional suburban home, courtesy of the fine work of scenic designer Derek McLane (TNG’s Sweet Charity), with perfectly appropriate costuming by Clint Ramos, (TNG’s Downtown Race Riot), lighting by Jeff Croiter (TNG’s Jerry Springer…) and sound design by Rob Milburn & Michael Bodeen (Broadway’s Sweat). But his intentions, even though coming from a financial need, seem pure and kind, while Lorraine’s act of charity seem predictably selfish and enmeshed in privilege and insensitivity. Their clash is telling, but oddly dismissive and passive on all accounts, just like the quick wrap up at the end of this confusing play.

The plotting of Happy Talk is convoluted and abstract, making one wonder why some scenes, especially the sneaky arrival of the daughter, are even inserted. Maybe some are included to send us off scent, in other directions so when the conflict finally comes we are surprised (we aren’t), but that is a weak impetus for inclusion. It’s clear from the first scene who Lorraine is and what she is capable of, with Eisenberg giving the actress very little to strive towards or dig deep into. Ireland’s caregiver is given a bit more of a journey with some lovely story-telling to delivery, but as the whole messy story unfolds, reasonings beyond the obvious and straightforward are lacking in the details of the writing. Ireland is the star here, giving a deceptively great performance wrapped up in a positive, caring character in great need of help. We care for Ljuba and her unclear future, but the trap she finds herself in, as passively disturbing as it is and as well played, isn’t dramatically engaging enough to hold our heart, our attention, and this play together. “You make everything happy, even when it’s sad” is a smart duo-purposed line, shining a dirty light on that type of positivity, but Ljuba’s plight is left to be microwaved and eaten by the monstrous Lorraine as an interesting flavor for lunch but nothing more. As a full theatrical experience, it doesn’t satisfy, leaving us cringing at the shallowness of the comedy, unfulfilled, disheartened, and embarrassed at the lightness of Lorraine’s non-insightful delusion.