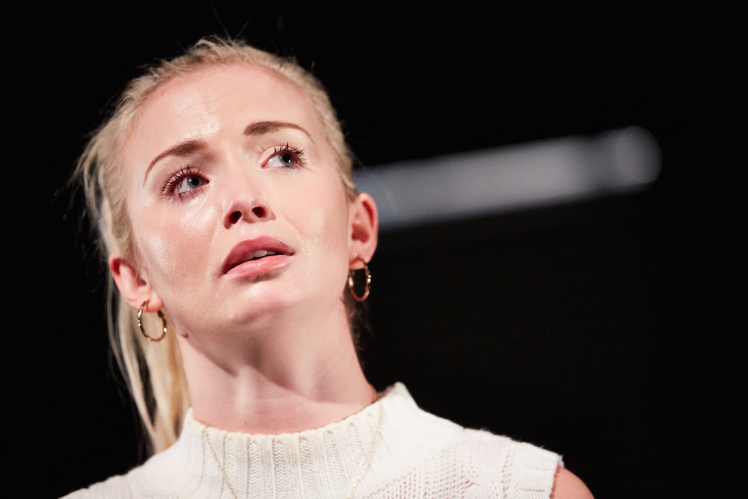 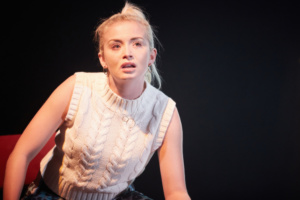 Looking at us straight in the eye, in the most unnerving manner, Sophie Melville dares us to look away. Her stance is strong and electric, and her gaze unnerving. She even describes a moment in this electric 80 minute one person show when she stares directly into the eyes of a young man as she stalks toward him through a crowded bar. She’s curious to see if he averts his eyes from hers, because if he does, she says, it is out of some small tremor of fear or discomfort, and she wins. This is exactly what Melville, as her character Effie, is challenging us to do; to not look away. To stay glued to her throughout Iphigenia In Splott, the Brits Off Broadway showcase import, regardless of our own discomfort or distaste for this foul-mouthed young woman traipsing around the small stage of the 59E59 Theatre. And it works, that dare. It’s almost impossible to look away. 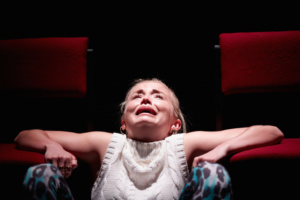 As directed skillfully by Rachel O’Riordan, Melville doesn’t really give us any chance to catch our breath and re-center ourselves from the moment she starts in at us.  With a heavy Welsh accent and an aggressive angry demeanor, Melville leads us through the troubled messed up life of this young woman who has lost all meaning and focus for any forward movement in her life in Splott, a town in Wales. It’s a dangerous and edgy performance that feels completely raw and powerful. And epic in a way.  In the Greek myth of Iphigenia, which this play by Gary Owen is inspired by, the innocent and faithful daughter of Agamemnon must be sacrificed to appease the goddess, Artemis.  Iphigenia is misled by her father, thinking that she is going to married, but in reality, she is being ushered up the alter to be sacrificed.  Knowing she is doomed, Iphigenia decides to die willingly, giving them her life, believing that as a mere mortal, she can’t fight against the will of a goddess. She believes that her death will be heroic, and ultimately, for the good of all Greeks. 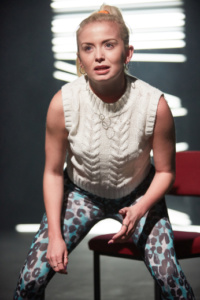 Effie is in no way the innocent or faithful young lady described in Euripides’ Iphigenia at Aulis. She is bold and brazen and, in many ways, desperate, waiting for something to happen that will give her life meaning.  She wouldn’t ever admit that, mind you, but her anger at the world and her obsessive and compulsive escapism through alcohol, drugs, and sex can be read in no other way. In a moment of compassion and vulnerability, (or is it blindness and weakness?), she gives her trust over to another, and this is where it all begins. She is deceived in her moment of trust and hopefulness, and lead down a path of destruction and abandonment.  In the same way that the Greek daughter was led up to the altor with faith in her father’s love. To say any more, would do a disservice to the play and to Melville.  But she does, in the end, sacrifice herself, paying a hefty price for the shortcomings of what society is willing to offer her. She is that Greek heroine by the end of this captivating tale, submitting to the will of the people of Wales, and retreating. Ultimately she dares us to see her through the same eyes as we did at the beginning of Iphigenia In Splott, when we might have had the impression that she was the ‘slag’ she first mentioned. Not the heroine she has become.