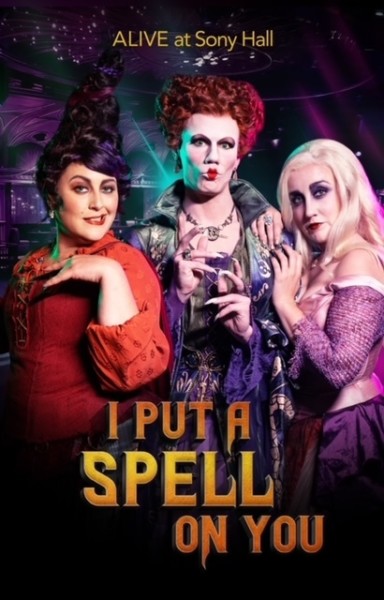 In their search to find beauty, youth and immortality, the bewitching and beloved Sanderson Sisters return from the dead and gather their most famous friends to help them lure the children of New York. The show begins at 8 pm Eastern (doors open at 7:30 pm) and is followed by a blowout dance party. Embrace the evening by joining us in your favorite Halloween garb and enter our costume contest to win prizes.

I Put a Spell on You: ALIVE at Sony Hall is presented by Kampfire Films and Jay Armstrong Johnson and benefits Broadway Cares/Equity Fights AIDS.

Tickets start at $35 for the dance floor and are on sale now at broadwaycares.org/spell.

I Put a Spell on You was created by and stars Johnson (ABC’s Quantico, On the Town, The Phantom of the Opera). The annual show is a spoof of and tribute to the beloved cult classic movie Hocus Pocus. Expect larger-than-life performances and choreography, over-the-top costumes and makeup, unmatched production value and a healthy dose of Broadway magic.

Every ticket purchased will help those across the country affected by HIV/AIDS, COVID-19 and other critical illnesses receive healthy meals, lifesaving medication, emergency financial assistance, housing, counseling and more.

Sponsorship and VIP packages are available. Visit broadwaycares.org/spell for information.

I Put a Spell on You is produced by Katie Rosin, Jay Armstrong Johnson, and DW. The production is written by Johnson and directed by Ahmad Simmons, who also is supervising choreographer for the show.

Suzanna BowlingOctober 30, 2022
Read More
Scroll for more
Tap
The Most Fashionable Workout From NYFW and Beyond Gymshark
My View: I Didn’t Have To Think About CLASSIFYING This Show As Great…..I Was There at Clint Holmes