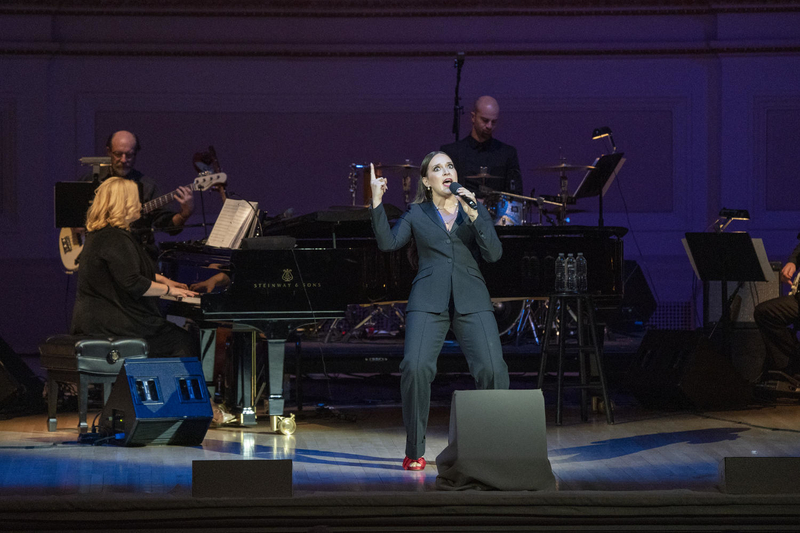 I am late to the table, but I have been Vosk’d.

Jessica Vosk’s show My Golden Age is as much about her pandemic experiences, as it is about getting to Broadway, dating and what her younger self dared to dream.

Jessica, dressed in a pin stripped suit entered Carnegie Hall to which she received a 15 minute standing ovation and she hadn’t even sung a word. She sold out the legendary hall and definitely has a following. 29.1K followers on twitter. Vosk is best known for her performance as the lead role of Elphaba in Wicked, Finding Neverland, and the 2015–2016 Broadway Revival of Fiddler on the Roof.

In 2014, she performed as Anita in the San Francisco Symphony’s live recording of the West Side Story score which was nominated for a Grammy. On February 17th, 2020, Vosk appeared as one of The Narrators in the 50th Anniversary concert of Joseph and the Amazing Technicolor Dreamcoat at Lincoln Center.

To start off her night a wonderful mash-up of Cole Porter’s “I Happen to like New York,” Petula Clark’s “Downtown” and Billy Joel’s “Empire State of Mind.”

Taking us to the 30’s was a mash-up of Bette’ Midler’s version’s of Cole Porters “I’ve Still Got My Health,” 42nd Street’s “I’m Young And Healthy” and Porter’s “Miss Otis Regret’s.” Backing her up was Marissa Rosen and Marty Thomas. With Mary-Mitchell Campbell on piano and a fabulous orchestra, it was a joy to watch a young audience thrill to standards.

Coming out in a gorgeous Belle outfit in perfect harmony, she duetted with Hoying on Leonard Cohen’s “Hallelujah” the harmonies, rifts and praise filled the auditorium. Not normally a fan of this song, this version was epic.

Ms. Vosk, is vulnerable, heartfelt and funny. The height of which was shown in the hysterical Pandemic Medley. “Thank You Next,” “I Knew You Were Trouble,” “You Need to Calm Down,” “Material Girl,” “Brave” and a reprise of “Thank You Next,” led you though dating on apps and the drama and realizations it can bring.

Vosk made her Broadway debut in 2014 in Jason Robert Brown’s Bridges of Madison County and went on as Marian. A glorious soprano was highlighted in “Another Life” from that show.

Prior to the show I was talking to a fellow critic and I wondered if the lead in the new revival of Funny Girl was going to be able to sing the dynamic “Music That Makes Me Dance” and viola the quintessential version presents itself. Jessica Vosk is Fanny Brice. She is everything that the character requires and more. Without being sacrilegious Ms. Vosk sings it better than Streisand. Casting seriously missed the mark. This show would have made a star with Ms. Vosk and the audience would be on their feet as they were last night. As she sang the exquisite ballerina Sara Mearns glided across the stage.

“Hey Jude,” “I Get Around,” “Livin’ On A Prayer,” “Piano Man,” “Survivor,” “Goodbye Yellow Brick Road” “Proud Mary,” “My Heart Will Go On.” “The Trolley Song,” “Born In The USA ,” “Zing Went The Strings of My Heart,” ” Candle In the Wind” and “Carmen’s Bizet” showed the range of styles that Ms. Vosk can do to perfection. As she sang the high note in Carmen, Kristin Chenoweth stepped out looking drop dead gorgeous is a black form fitting gown that was low cut in the back hung with jewels.

A touching “The Way We Were” had Kristen taking us to a new place.

Now dressed in a cream colored 40’s gown Jessica has been working on a new musical about Betty Boop. 15-time Grammy® Award winner David Foster is writing the music and last night “Something To Shout About” not only got it’s Carnegie Hall debut, but won a round of fans.

Falling in love brought “Different Drum,””I Don’t Know How to Love Him,” and Sondheim’s “Everybody Says Don’t”

Sitting at the piano, it turns out Vosk is a prolific and gifted songwriter. She debuted her own composition “Walking In My Sleep.” This soulful piece with stunning harmonies by Rosen, made me want to run and get a copy.

Back for a spectacular treat, Jessica and Kristin recreated Wicked‘s “Defying Gravity and “For Good.” Standing ovations for the 5th time that night.

Ragtime’s “Back to Before” was given another fabulous take.

Heartbreaking, inspiring and vulnerable, a tearful Jessica read a letter to her six-year-old self. Staying true to herself and her dreams and the set backs she would triumph from spoke to the entire audience. Jessica cares and it is evident. Talented in spades, but a heart and soul to match that gives, and gives, and gives.

Giving a fan a chance to sing on stage Alvis Green Jr. https://www.instagram.com/alvis_greenjr/ wowed with Pink’s “I Am Here.” Jessica loves her fans and it shows.

Kudos to Warren Carlyle, who directed this show with aplomb. If I ever perform again please Warren you are the one that I want!

Ending her show Jessica sat on the edge of the stage ala Judy Garland in a bathrobe and belted out a clear and melodic “Get Happy/ Happy Days” without a mic. She thanked her audience and she sang “Happy times, happy nights, Happy days are here again and you knew all three were true.