Joan Ryan Proves She Has The Chops and More At Birdland 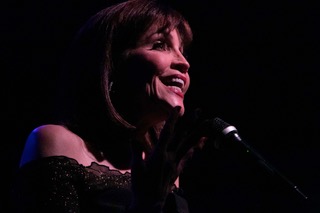 Joan Ryan Proves She Has The Chops and More At Birdland

What makes a great singer is that they are also a great actor and Joan Ryan has that under her belt. Besides an impressive four octave range, Joan knows how to get into the heart and the soul of a song. Ryan created the role of “Tina Pallodrino,” in the long running hit series Saved By The Bell”  and has performed across the country in Little Shop of Horrors, Joseph and The Amazing Technicolor Dreamcoat, Footloose, Nunsense, Angry Housewives, Triumph of Love, Nite Club Confidential, and the West Coast premiere of Stephen Sondheim’s Anyone Can Whistle.

Showing she can rock with the best of them Ryan started her show off Lady Gaga’s “Edge of Glory” into the Ahrens and Flaherty “Journey To The Past,” from Anastasia.

Joan’s unique rendition of Rodgers & Hammerstein’s “Shall We Dance” was heard nightly during the touring production of Stars on Ice, produced by Olympic skating legend, Scott Hamilton. She sang this song live at Rockefeller Center, and it was also featured on The Today Show. After hearing this song in her concert, I can understand why it has become a signature song.

Transporting herself from LA and traveling back and forth had Ryan singing J Baron and J. Harris melancholy “I Can’t Forget”.

Her next song “Beltaholic”, she wrote with her talented friends Stephen Witkin and Andrew MacBean. This song is a show stopper and explains how Joan is a true beltaholic who needed AA of BB.

R & H “Something Wonderful” blended into Sondheim’s “There Won’t Be Trumpets,” and then Kerrigan and Lowdermilk’s “Run Away With Me. These songs added a wistful quality, while telling of how Ryan asked her husband to marry her.

I really loved her version of “Bring Him Home” from Les Miz. This was so heartfelt.

Next up was a blues version of “Any Place I Hang My Hat is Home”. This was one of my favorite moment from the show, as Joan steamed with sex and longing.

Joan has known Joanna Gleason (Into The Woods) for many years. They bonded over talking about children in their dressing room, so it was completely appropriate that they mashed up Sondheim’s “Children Will Listen” into Rodgers & Hammerstein’s “You’ve Got to be Carefully Taught.” Her musical director Ron Abel forged the arrangement.

Another role Joan is known for is playing Tina’s mother, Judy Denmark and Ginger DelMarco in the  L.A. premier of the hit musical ‘Ruthless. You can hear her on the original cast recording. Not disappointing those fans Joan showed “It Will Never Be That Way Again” (Joel Paley/Marvin Laird – from the musical Ruthless) and pulled out all the stops!

On of my favorite songs is Bill Finn’s “Anytime,” which Joan effortlessly delivered.

Hotter than hot and oh so country, Ricky Lee Jones’ “Danny’s All Star Joint” blew the audience away with her marvelous vocals and fabulous band with Sean Harkness on guitar, Steve Doyle on bass, Dave Mann on sax/flute and Rex Benincasa on drums & percussion.

For her encore Josh Groban and Tony Gab’s “Granted”.

Have you ever felt it could all go away
If you blink
If you never stop running you won’t fall behind
So you think
And you wonder in your heart
If you’re still not who you are
Who are you?
Nothing’s as it seems till it all falls apartIf you have a dream, go chase it
If you feel hope, don’t waste it
If you find love, embrace it
And never take a single breath for granted
The story’s yours, go write it
Tomorrow’s undecided
Our days are counted on this planet
Never take a single breath
Take a single breath for grantedMaybe it’s time you bet on yourself
Listen to your heart
Just listen to your heart and nobody else
So go find out who you are
Only you know who you are
Who are you?
‘Cause all you have to lose
Is your best life yet
So go aheadIf you…

These lyrics captured Joan Ryan’s concert and who she is. With a range that is expansive, a tone that is thrilling and acting chops to back this all up, Ms. Ryan is the real thing. This is a performer to keep your eyes on