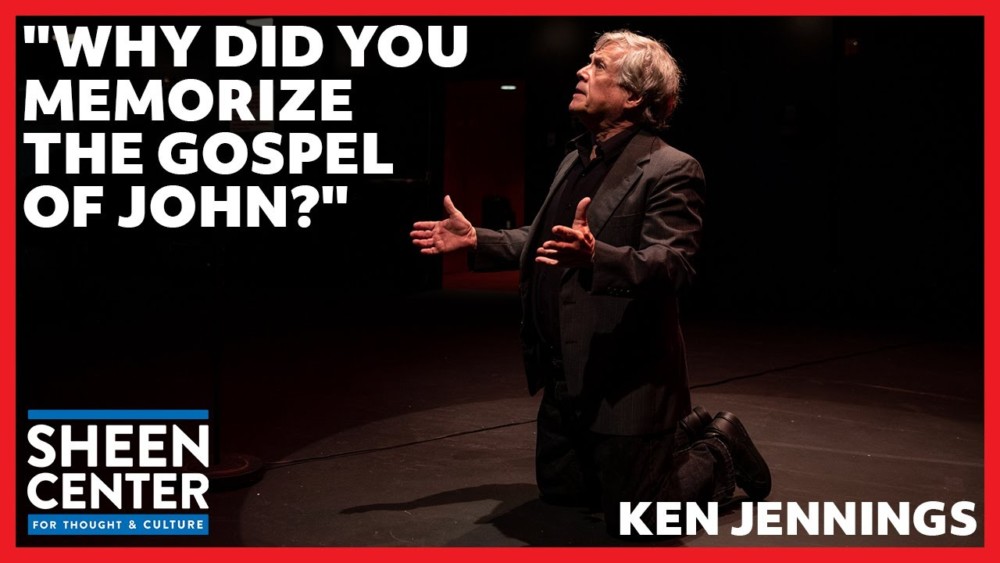 For Christmas the Sheen Center for Thought & Culture (18 Bleecker Street at the corner of Elizabeth Street, NYC) presents The Gospel of John, conceived and performed by award-winning Broadway veteran Ken Jennings. Jennings brings the Gospel to life on stage – in just 90 minutes.

Jennings is best known to Broadway audiences for creating the role of Tobias in the Broadway premiere of Stephen Sondheim’s Sweeney Todd: The Demon Barber of Fleet Street. Jennings received the Drama Desk Award for Outstanding Featured Actor in a Musical for this role. He created several other roles on Broadway including Georg Strunk in Grand Hotel: The Musical, The Boss in Side Show, and memorably played Finian in Finian’s Rainbow at the Irish Rep.

“I memorized this first as a prayer, not as a play,” says Jennings. “I started memorizing The Gospel of John as a spiritual practice during a difficult time in my life. I’ve always had an affinity for John, which has always seemed to truly be a firsthand narrative by a man who was actually there.”

T2C: How did you get into theatre?

Ken Jennings: Years and years ago. I  got my Actor’s Equity card at 19, 53 years ago, but I had been doing theatre long before that. My parents sent me to St. Peter’s Preparatory School, which I wanted to go to because they did two plays a year. I got my card doing Tyler At The Circus. It was the 1st equity children’s show.

T2C: Tell us about your audition for Sweeny Todd and your experiences with that show.

Ken Jennings: At that time I had an agent. I knew nothing about the show. I sang one or two songs, I think it was “Danny Boy.” I was later told, the moment I walked on the stage Hal’s interested was provoked. Something about my gate. Not even sure if that is true. It was actually not my first Broadway show, I also did All God’s Chillun Got Wings.

T2C: What was it like working with Stephen Sondheim?

Ken Jennings: I was in awe and still am in awe. I was always aware I was in the presence of Stephen Sondheim. I was a bit in terror of him.

T2C: What about Hal Prince?

Ken Jennings: I had many casual conversations; he was my director. Hal was a wonderful director, he was an actors director. I had a question for Hal about why he was working with me differently and he told me “Ken if I directed you this way, think of the question! I don’t direct Angela, the way I would direct Kim Stanley. I have directed you in a different way.”He took each person into consideration.

T2C: You were in Grand Hotel. What was that experience like and what is your greatest memory from that show?

Ken Jennings: Another brilliant director Tommy Tune. we just did a 30th anniversary gala. Tune is a directorial gift. He directs like a Seurat painting, then it comes together. He painted that stage a continual flow of life. Each of the different rooms had a flow of movement. He pulled that off. I never even thought that staging could reach an artist’s pinnacle like that. I have never seen anyone stage a show like Tune.

T2C: You were then in Urinetown. Tell us about that experience.

Ken Jennings: A lot of fun. I knew actors who wouldn’t audition for it. A casting director told me “I have never received such a terrible submission. John Rando and John Carafa could have missed by a mile, but they landed that show. That was tough one on the page.

Ken Jennings: Another strange one. Magnificent reviews, but there was a time, “The Times” could make and break a show and that didn’t work anymore. We were suppose to open the year before, but we couldn’t get a theatre. By the time we arrived so did Ragtime and The Lion King.

T2C: You are now doing The Gospel of John.

Ken Jennings: “The council of the Jesuits forgot to pray”. We all have our favorite moments of scripture, this is mine. This was a process as part of my prayer life. I started to memorize it. It started out as the beginning of a prayer. Alec McCowen, did The Gospel of Mark and Dean Jones, John in Exile. It was and still remains a prayer.

T2C: Has this show changed your life in some way?

Ken Jennings: Yes, each day I pray St. John let me become closer to you and I feel his influences in my life.

T2C:  What would you like our audiences to know about you that we haven’t asked?

Ken Jennings: People always say “Nothing is more important than your health?” I say “what is more important, is if you have your spiritual health, then you will be ok”. I believe the journey of a human being is a spiritual journey, no matter what path you take. I was raised very Catholic, yet I never believed the resurrection was real. Nice metaphor for rebirth and a way how to get past tough times or get back from tough times. Then I read the epistles differently. So many of the epistles say these are not books of fiction. Peter 5: 7 cast all your anxieties on him because he cares about you. John writing to us as Gods children. We know when these epistles were written. We know who wrote them. These men’s lives were changed, because they had experience the risen Christ. These men accepted death rather than say it wasn’t true. When I realized that a door in my heart swung open. If the resurrection is real, then the whole story is real, the entire story is true.