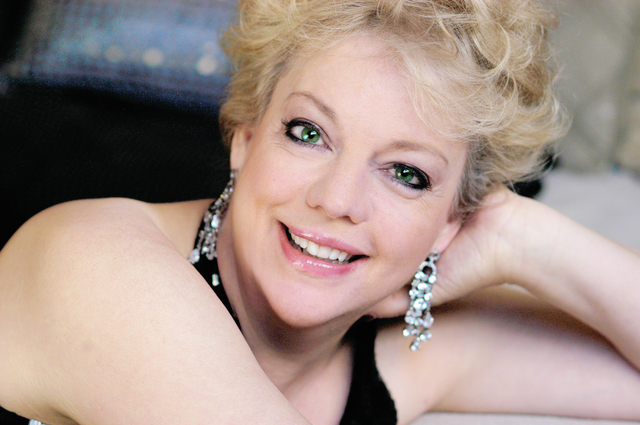 KT Sullivan is an singer and actress known for her performances in cabaret and musical theatre. She performed in the Oak Room of the Algonquin Hotel for over a decade. She now performs at venues such as the Laurie Beechman Theater, The Beach Cafe, the Pierre Hotel. She often performs with Mark Nadler, Steve Ross and Jeff Harner.

On Broadway, Sullivan appeared as Suky Tawdry in the 1989 revival of The Threepenny Opera and as Lorelei Lee in the 1995 revival of Gentlemen Prefer Blondes. She toured in Annie Get Your Gun with Cathy Rigby and also performed in Sugar and Born Yesterday.

With Mark Nadler and Ruth Leon they wrote American Rhapsody: A New Musical Revue, which she and Nadler performed at the off-Broadway Triad Theatre. The musical was nominated for the Lucille Lortel Award and Drama Desk Award for Outstanding Musical Revue. They won the MAC Award for Best Musical Revue. Sullivan also appeared in the New York City productions A… My Name Is Alice and Splendora in 1995, and performed in the Musicals Tonight concert presentations of So Long, 174th Street and By the Beautiful Sea and Fifty Million Frenchmen .

In regional theatre, Sullivan appeared in You Never Know at the Paper Mill Playhouse. She has performed at the Old Globe Theatre, the Hartford Stage Company, the Municipal Opera of St. Louis, the Goodspeed Opera House, and the Great Lakes Theater Festival.

In the West End, Sullivan appeared in Vienna to Weimar with Karen Kohler.

Sullivan has recorded albums with Nadler, including Always: The Love Story of Irving Berlin, A Fine Romance: A Dorothy Fields Songbook  and A Swell Party: Cole Porter. Her solo recordings include Crazy World , Sing My Heart: The Songs of Harold Arlen, In Other Words, The Songs of Bart Howard, KT Sullivan, Ladies of the Silver Screen and KT Sullivan Sings the Sweetest Sounds of Richard Rodgers. She also recorded the revival cast album of Gentlemen Prefer Blondes. Her latest CD, “Timeless Tunes with Jon Weber”.

In April 2012, Sullivan was named Artistic Director of the Mabel Mercer Foundation.

KT Sullivan: In 1987, which was the year I met my husband. My roommate was Mauricio Bustamante. We met during the national tour of Annie Get Your Gun in 1993. He was Sitting Bull and I was Dolly Tate. I had been on the waiting list for three years and you had to have a roommate to have a one bedroom. In 1999 I finally got a two bedroom, so I could have room for the grand piano that Bart Howard the composer of “Fly Me To The Moon” left me when he died. I waited over three years to get that piano because it wouldn’t fit into my one bedroom. Now we all sing around the piano. I love this apartment. You can see the Freedom Tower and both rivers from the balcony. We still had to have a roommate and now it is Chinua Thomas who is a God-send as I am not technical and he is geek perfect. He can do anything.

T2C: Who are your friends in the building?

KT Sullivan: Actress Tracy Rosten, singer Jackie Sanders, her husband musician Bill Hayes and their son Olen. I love watching kids grow up here and now we have Susie Mosher’s new baby to watch grow up here. Other friends include Sammy Goldstein, Jan Horvath and her artist husband Rino Li Causi. Then there’s Tommy who hangs out downstairs and is touched. A gentle soul, who loves the Yankees. Constance was an original Copa girl who fantasizes about Ted Kennedy being in love with her. She would write me these notes and put them under my door. She used to be quite glamorous. Now her hair has gone gray and she walks with a cane. She goes out for her smokes and though still delusional, I know she’s taken care of. I miss some of the great actors that lived her like Reno Roop and Brian Murray. There are so many people you get to know.

KT Sullivan: I Love Ruby Rims. During the AIDS crisis he was down to like 90 lbs, but after the cocktail he thrived. At one of his fabulous Christmas benefits in the Ellington Room he sang “This Is The Moment” and I told him my age. Until I turned 65 I didn’t tell anyone my age, but I told Ruby because we share the same birthday, Halloween 1953.

T2C: What are you doing professionally now?

KT Sullivan: The Mabel Mercer Foundation takes a lot out of my time. We do the Cabaret Convention,The Adela and Larry Elow American Songbook High School Competition and in June are doing a show called “I Like Men! Celebrating 100 years of Miss Peggy Lee” hosted by my sister Stacy. This summer I be back at the Irish Repertory, with Steve Ross in Love Noel!

T2C: Have does living in the building make you feel?

KT Sullivan: Secure. Everyone is worried right now about their rent. This building is benchmarked, so rent is affordable.

T2C: What has this building allowed you to accomplish?

KT Sullivan: Location, location, location. I can see a Broadway show and be there in 10 minutes. Everything is so simple. I’m not slinging hash to pay the rent so I can do my shows and see others perform. In fact my favorite place to perform is the Laurie Beechman Theatre, as I take the elevator and never have to leave the building.

T2C: How is the building reacting to the Coronavirus?

KT Sullivan: At 7pm we stand outside and clap for the healthcare workers who have done so much. The building also has great vivid signs posted everywhere. I feel protected, taken care of, as if we were here together protecting each other. People take care of each other here.

KT Sullivan: There was a man Mike Davis, who lived next door. He canoed on the river everyday. There are practice rooms in the building, so you don’t annoy your neighbors, but Mike always complimented me on everything I was rehearsing. One time he said, “I loved the Gershwin!” When he died, they had this tiny electric piano and I stupidly declined to sing. I regretted that then and I still regret it that to this day.

T2C: What is your fondest memory of New York and Manhattan Plaza?

KT Sullivan: For Manhattan Plaza it is that people take care of each other here. They replace broken appliances and care. My fondest memory is my wedding in 1999 to Stephen. My ring bearer was three and in tails and now he stands 6’6 ft tall. I was wearing a red dress like Jezebel or those Chinese brides. My father was a part of this and I am grateful for that. The church was filled with artists of all kind. It certainly was star studded. Celeste Holmes and Charles Busch were in attendance among others. After I said “I Do” the choir broke into the “Hallelujah Chorus”. We had our reception at the National Arts Club where Terry Burrell, Mark Nadler, Tommy Femia and Tovah Feldshuh and so many others sang. Julie Halston wrote a historical monologue for the occasion.

KT Sullivan: I want you to know about my mother. In 1999 she made her New York debut with “The Lords Prayer” at my wedding. She was born in 1930 and I am so happy and privileged to have such an artist as my loving mother. I owe her everything. Showing gratitude is the most joy you’ll ever get and I delight in being able to share my mother’s artistry. This is my greatest joy.

Suzanna BowlingJuly 27, 2022
Read More
Scroll for more
Tap
What To Watch April 1st To Take Away The Blues
Prayers For Nick Cordero Who Is Fighting For His Life