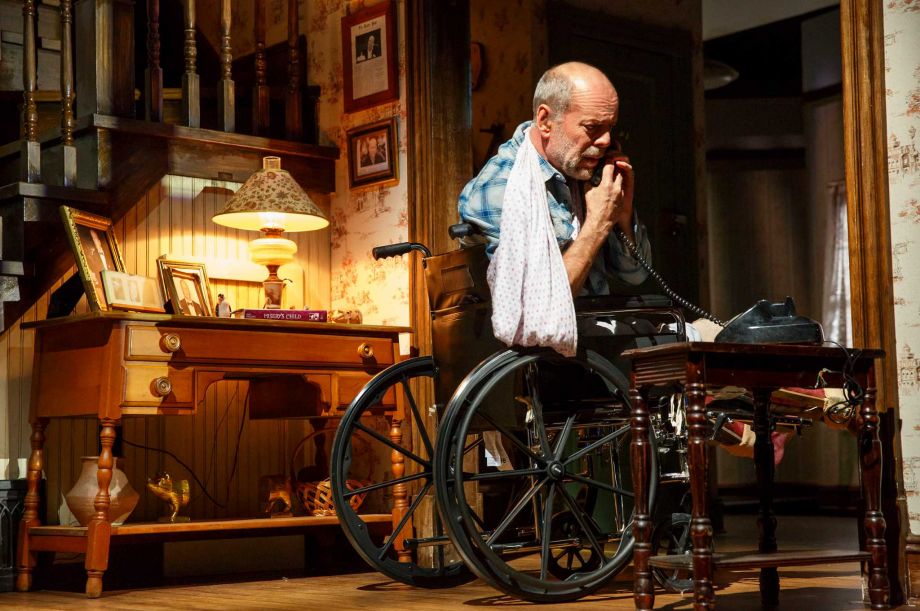 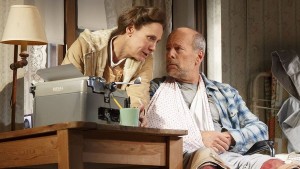 Stephen King’s Misery is not as bad as people made it out to be. Is it great…no, but will audiences who pay hard earned money like it….yes, because they will get what they are paying for. William Goldman’s adaptation is missing some key scare factors, which could have lead to more chilling take your breath away moments. I kept thinking every time a door opened Annie would be in wait, instead it stayed pretty true to the novel.

For those of you who never read the novel or saw the movie, author Paul Sheldon (Bruce Willis) has been in a car accident and has been rescued by his #1 fan Annie Wilkes (Laurie Metcalf), a former nurse. He has two broken legs and a dislocated shoulder. When Annie is allowed to read his latest novel, she is thrilled. Unfortunately for Paul he has killed off her favorite character, Misery and gone the route of a self autobiographical novel, which Annie hates. When she realizes Paul killed off her favorite character she flies into a rage, revealing she lied about calling his agent and the authorities. When Annie leaves, Paul tries to escape from his room, but she has locked the door. Paul is Annie’s prisoner. Annie forces Paul to burn his latest manuscript and write a new novel entitled Misery’s Return, in which he will bring her favorite character back to life with her help. Paul complies, seeking a way to escape. He begins stockpiling his painkillers to drug Annie, but that fails. As Paul heals Annie is afraid of losing him, so she drugs him, straps him to the bed and breaks his feet. 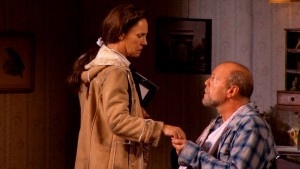 The local sheriff, Buster (Leon Addison Brown) meets his end and now Paul realizes it is Annie or him. When the book is done, he tricks Annie into thinking he set the manuscript on fire. Paul and Annie fight and Annie is killed.

Metcalfe makes Annie her own despite the melodramatic overtones. Her Annie though lonely and mentally unstable, is like a child when she gets what she wants and a demon when she doesn’t. She makes her wants clear and there is an honesty to her portrayal.

Mr Willis is not terrible he’s just not that interesting. We leave the theatre not know who this Paul is. We don’t ever really see the textures of this man. In the smaller role of the Sheriff, Mr. Brown makes a better impression.

Will Frears directs this more like a melodrama with comedy overtones. The audience laughs a lot. David Korins revolving set keeps the action moving.

Metcalf is sure to win a Tony nod, Willis is likable and the show completely enjoyable. Miserable….not in the slightest.

Suzanna BowlingJanuary 18, 2023
Read More
Scroll for more
Tap
Steve The Battle of Steve’s
Julia Murney What You See is What You Get