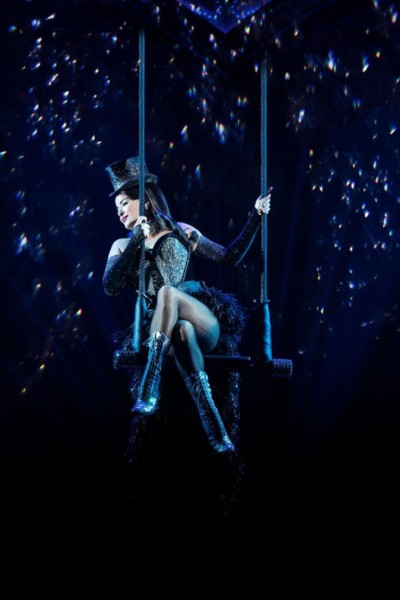 If a high-kicking, visually spellbinding, toe-tapping night out is what you love in entertainment, have I got just the show for you. Even though the original opening night was delayed a bit by a partial cast-wide Covid-19 outbreak, everyone is now back, healthy and bringing their A+ game eight shows a week at the Nederlander Theatre. The opulent, 10 time Tony Award-winning new show, Moulin Rouge! The Musical, is bringing their message of “Truth, Beauty, Freedom and Love” to a ravenous Windy City audience. It is very easy to see while this production won awards including Best Musical, Best Costume Design, Best Choreography, Best Orchestrations and Best Scenic Design. Simply put, this show is the best. You can use all the superlatives; dazzling, opulent, stunning, breathtaking. Each certainly applies. The surface charms of Moulin Rouge! The Musical are absolutely undeniable. 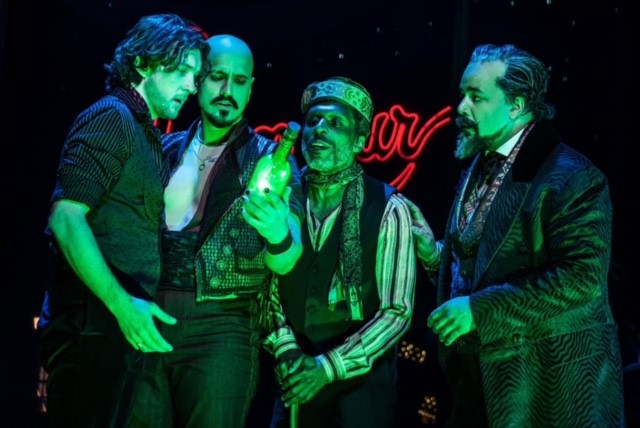 Set in a nightclub in 1899 Paris and based on the 2001 Baz Luhrmann film of the same name, the Moulin Rouge is advertised as a place where “all your dreams will come true”. Everyone is stunning, everyone is lavishly adorned, everyone is incredibly flexible. Seriously, Sonya Tayeh’s sensual and powerful choreography appears to defy the laws of gravity and just about any advanced yoga class. It is impossible to not find a song you recognize, because this musical features what felt like all of them. A Broadway megamix for the post Glee generation, featuring samples of over 65 well known songs of the last 5 decades. LaBelle’s “Lady Marmalade”, Marilyn Monroe’s “Diamonds Are a Girl’s Best Friend”, Beyonce’s “Single Ladies (Put A Ring On It)”, Walk The Moon’s “Shut Up And Dance”, Katy Perry’s “Firework”, Sia’s “Chandelier”, Pink’s “Raise Your Glass”,  Lady Gaga’s “Bad Romance”, Britney Spears’ “Toxic”, Adele’s “Rolling in the Deep”, Gnarls Barley’s “Crazy” and “Roxanne” by Sting and the Police. Whew, and truthfully, I have barely scratched the surface of the litany of pop song snippets on display. Credit wunderkind Justin Levine for stitching this varied tapestry of arrangements together so seamlessly. Added to the mix, song pieces from Whitney Houston, David Bowie, Fatboy Slim, The Human League, Elton John, Talking Heads, Lorde, Shirley Bassey, En Vogue, Rolling Stones, No Doubt, Eurythmics, Rhianna and Nat King Cole. If you have ever listened to the radio over the last 50 years, you will absolutely recognize at least one or two…or three of these nostalgic beats. 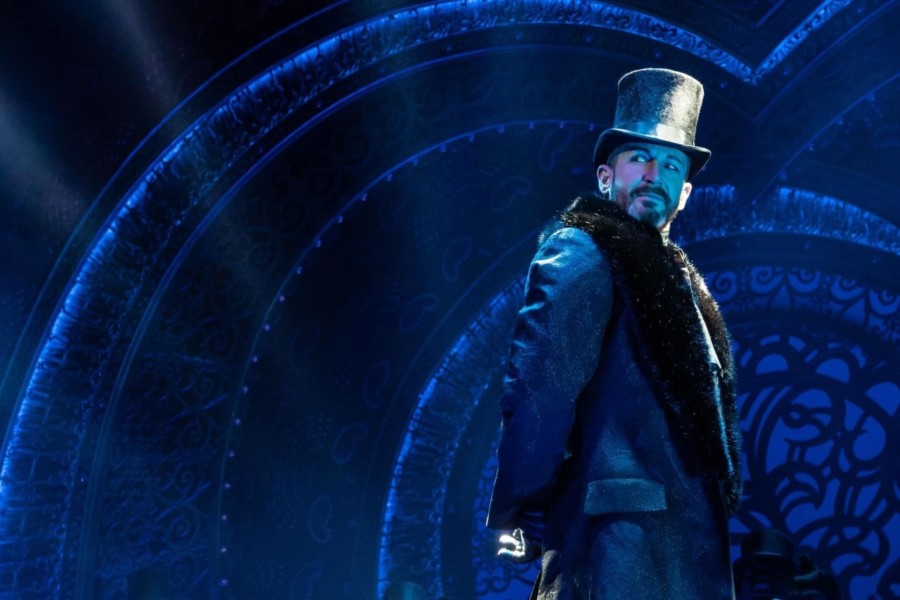 Director Alex Timbers keeps this Parisian love story pace going full throttle. The club’s star, the “sparkling diamond” Satine, is a dazzling, star-making vehicle for actress Courtney Reed. Previously best known for originating the role of Princess Jasmine in Disney’s Aladdin on Broadway, Reed continues to stun. Her courtesan character is promised to the villainous Duke of Monroth, the winningly smarmy David Harris. Unbeknownst to the Duke, penniless writer, Christian, a fabulous Connor Ryan, gets to her first in a frenzied chaos of mistaken identity. It would be tough to call this a love triangle, as Satine gives the duke everything but her heart. The rub, the duke is financing her new show, and she is an essential part of his deal with club owner, Harold Zidler, a scene-stealing Austin Durant. Adding to the fun, uncompromising temperamental French director, Toulouse-Lautrec, a charming Andre Ward, Tango Dancer/Choreographer/Gigolo, Santiago, Gabe Martinez, the lusty Argentinian with a burning passion for the conniving and ambitious chorus girl, Nini, played with athletic fury by Libby Lloyd. The name of the show within a show, why “Bohemian Rhapsody” of course, a reference to British rock band Queen. The pop culture references are never-ending. 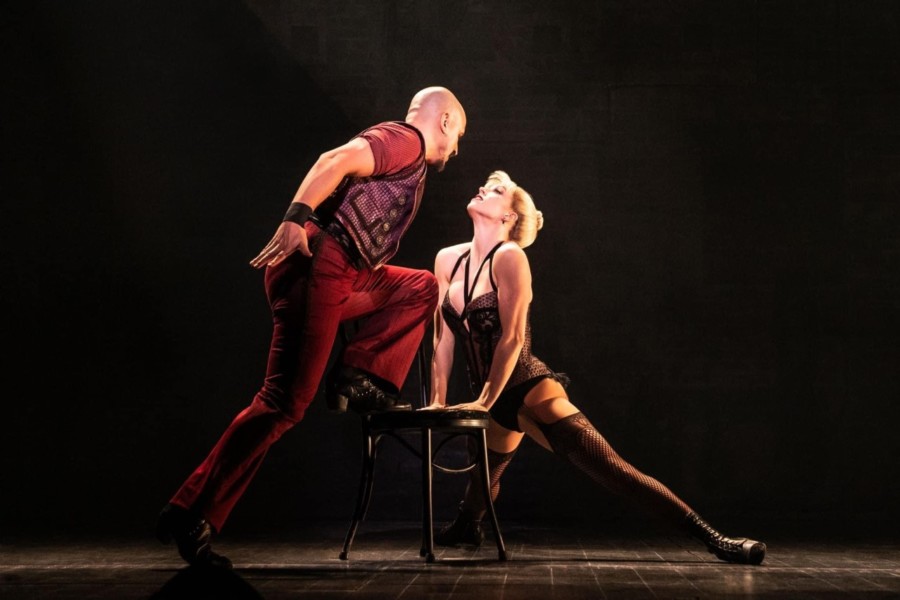 For those of us who have seen the original production at the Al Hirschfeld Theatre in New York, the staging in Chicago kept most of the same visual elements. The giant elephant! The spinning windmill! The pre-show contortionists!  Even the knife swallowers, although here they are only on the stage, not peppered throughout the theater. I remember originally thinking, how in the world will this be able to tour?The answer, quite nicely. Derek McLane’s incredibly ornate set design offers so much more any other national tour I have seen launched in the last decade. Catherine Zuber’s sumptuous costuming, beaded gowns, velvet gloves, Parisian couture, layered cancan skirts, is a rainbow explosion feast for the eyes. David Brian Brown’s wig and hair design is of note as well, both busy and essential on a cast of nearly three dozen. It is also wonderful to see so many Windy City alumni amongst the cast. Leading lady, Courtney Reed, originally from Elgin, Illinois. Ensemble member Adrienne Balducci, easily recognizable from her performance in a pre-pandemic production of A Chorus Line at Porchlight Music Theatre. Principal standby Denzel Tsopnang, from Mercury Theater’s Sister Act the Musical, played here just before the holidays. 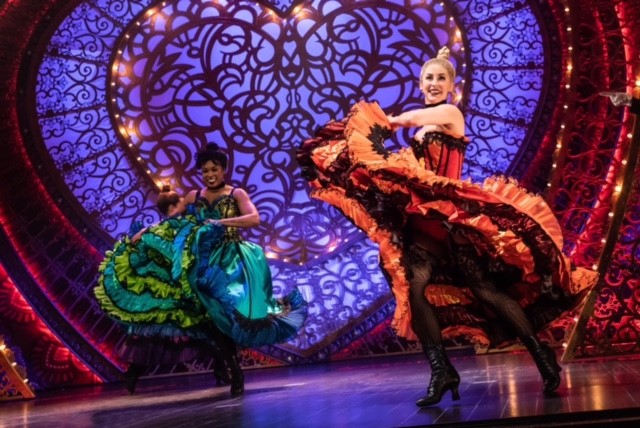 Moulin Rouge! The Musical is a feast for the eyes and the ears. Blending a vast array of popular music, sensual and strapping choreography displayed by a most talented of troupes, and the most dazzling costuming seen on stage in decades, it is hard to imagine any other show that provides this much bang for your entertainment buck. Stay through the entire curtain call, particularly if seated on the main floor. You are showered by both inspired performances as well as a tsunami of heart-shaped confetti exploding from the stage. After nearly two years of shutdown, who isn’t ready for a rambunctious party? Moulin Rouge! The Musical delivers. 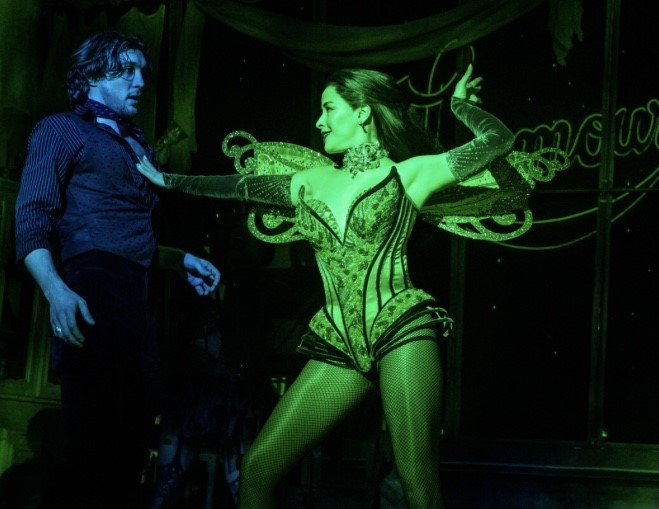 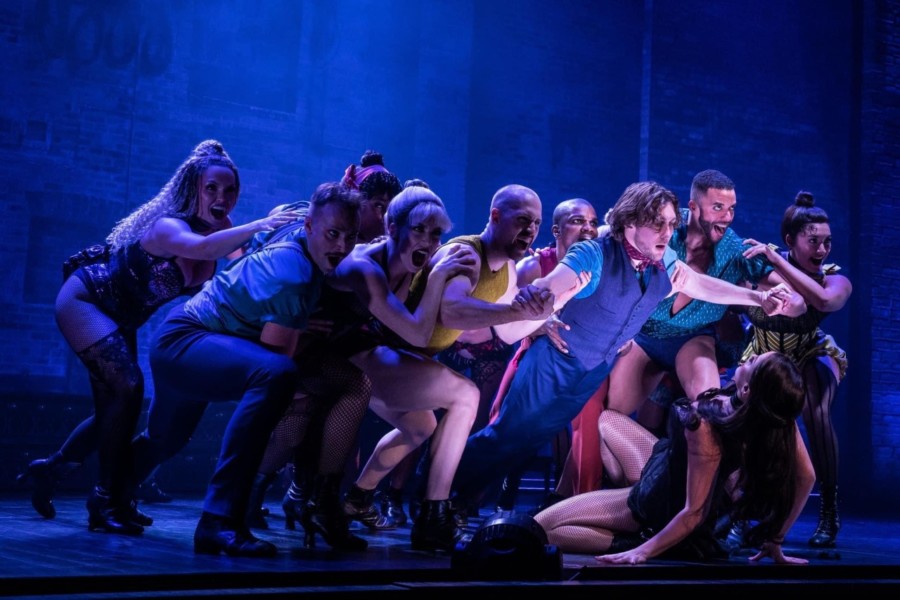 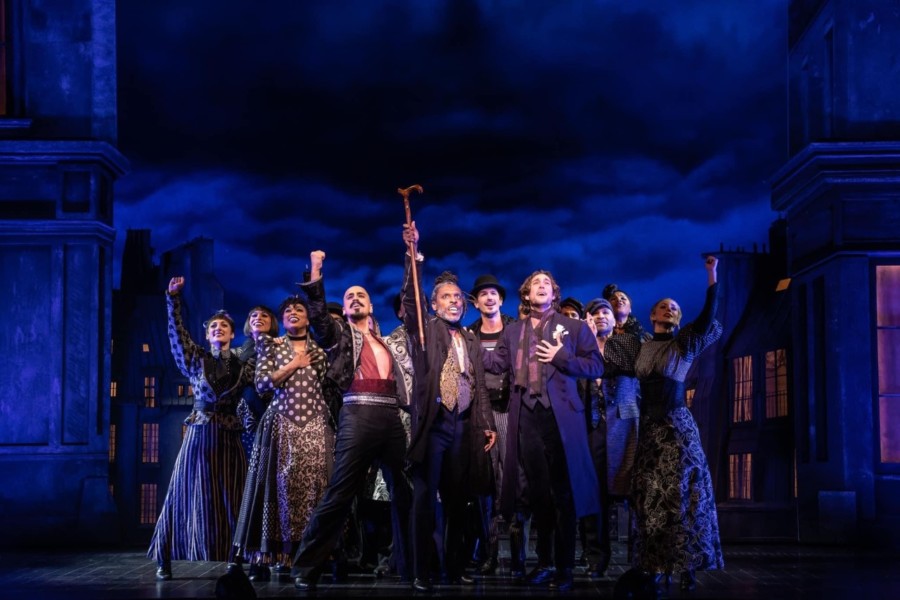 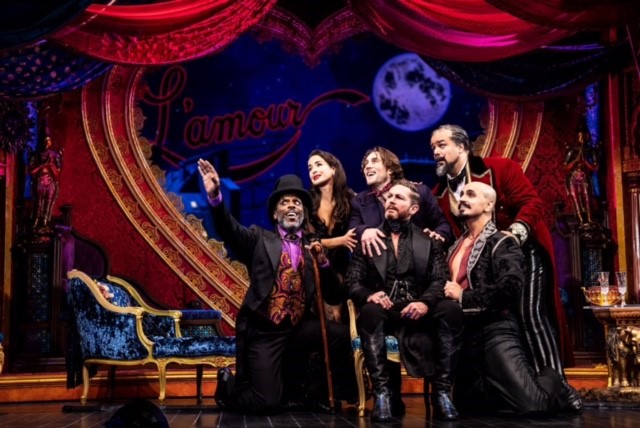 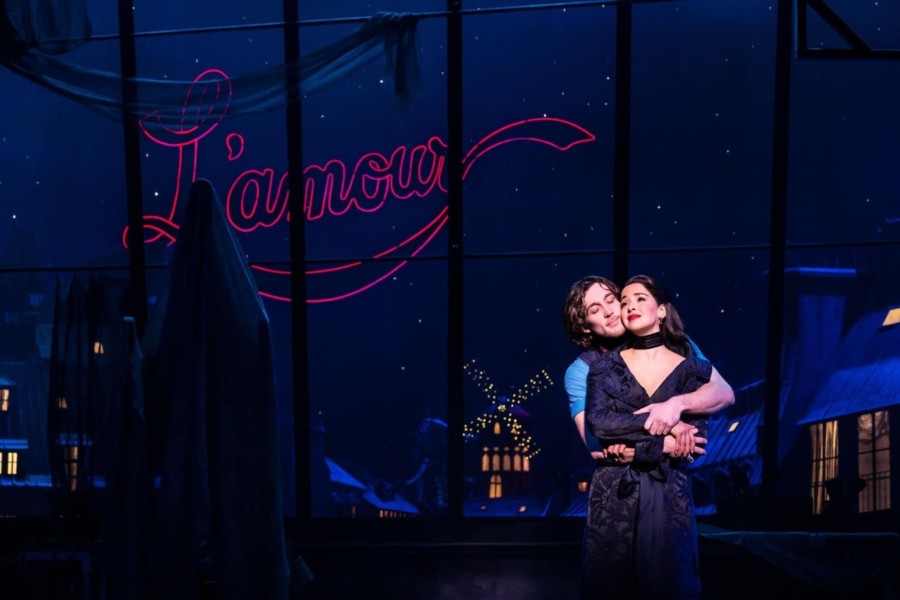 Moulin Rouge! The Musical is currently playing at the Nederlander Theatre through May 14, 2022. 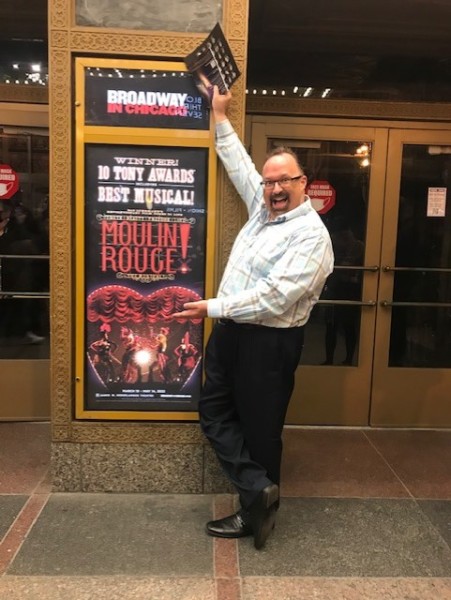