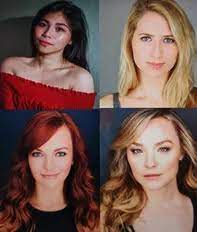 What do you get when you combine four talented women on stage to sing about life in 2021? FOUR!, a new cabaret performance that will debut on the stages of Urban Stages as a part of their Winter Rhythms series. The four ladies are scheduled to sing a variety of popular tunes on December 16th at 9PM. Tickets available at Urbanstages.org.

“I have either known or seen the talents of these wonderful performers over the years and I am grateful to Urban Stages for giving me the stage I wanted to spotlight them in a fun and timely show,” Horsley says. “The past twenty months have been particularly hard on the theater community and the artists. I tried to take some of these singers’ experiences over that time period and present them with heart and humor and especially with hope for a better 2022.  What better way to do that than through song?”

Tickets for shows are on sale at urbanstages.org

Karen Mason is an acclaimed Broadway star and concert artist. Her new album Let the Music Play, is available in all digital formats and on CD from Zevely Records. The recording’s powerful and timely first single, the title cut “Let the Music Play,” was released earlier this fall. On the heels of her featured role opposite Ewan McGregor on the hit Netflix miniseries “Halston,” Mason presents this collection of theater music, pop classics and new compositions. Special guests Stephen Schwartz, who plays piano on a tender version of the beloved Wickedballad “For Good,” and David Friedman, who accompanies Karen on his poignant standard “We Can Be Kind.” The album – which features arrangements by Christopher Denny and Barry Kleinbort, in addition to contributions from Dick Gallagher, and Brian Lasser – is produced by Paul Rolnick. Listen to the new album at Spotify or Apple Music.

Following her sold-out album release concert at New York’s Feinstein’s/54 Below Karen, will return to the city for a very special three-night edition of her legendary Christmas show at The Laurie Beechman Theater from December 17-19. She will also celebrate the album and the holidays at New Hope, PA’s RRazz Room on December 11. Concert info and album details are at KarenMason.com.

David Sabella, an award-winning singer and actor, celebrates the release of his new CD “Time Heals” in the jewel-box room at Pangea (the Café Carlyle of the lower east-side) with his show, “Pandemic Relief.” The album, called “Time Heals,” was recorded live during two previous performances of “Pandemic Relief,” and features musical favorites from Broadway, the Great American Songbook, and pop music, re-set in new, illuminating arrangements by Christopher Denny, Gregory Toroian, the late Rick Jensen, and Music Director Mark Hartman. The trio is rounded out by Dan Gross on Drums, and Sean Murphy on Bass.

Sabella, best known for his years on Broadway in the musical Chicago, is also an award-winning actor, and an internationally recognized classical singer whom Luciano Pavarotti proclaimed “Excellent, not good, excellent!” In addition to originating the starring role of “Mary Sunshine,” Sabella joined the national touring company of Chicago for the historic opening of Mandalay Bay (Las Vegas) and then returned to the Broadway company to appear with Melanie Griffith as Roxie Hart. Sabella also starred in numerous productions, and in various leading roles Off-Broadway, at Lincoln Center and Carnegie Hall. I

Sabella is also the author (with Sue Matsuki) of “So You Want to Sing Cabaret,” (2020, Rowman & Littlefield), The Owner and Chief Editor of www.CabaretHotspot.com, and one of NYC’s most sought after voice & performance coaches, www.davidsabella.com.

Sharon McKnight writes me “The last time I performed in an open-to-the public “Sharon” show was January 2020 in San Francisco. Finally I’m getting hip and going with the flow. My next show will be on Thursday, December 9, at 8:00 PST and will be streamed from Feinstein’s at Vitello’s in Studio City, California.  It’s called “Between Holidaze”. You can come to the showroom at the restaurant in person or stream it in your underwearfrom home.  Don’t try to hide it.  I know you’re out there.  How many times have you had dress code options?  You can thank me later. The show will contain just a couple of “my kind of Xmas songs” and requests that have been made over the last almost two years.  The Live Stream can be viewed for 2 weeks following the night of the show.”  Go to SHARON McNIGHT “Between Holidaze” to learn more.

Ghostlght Records announced that Ride the Cyclone: World Premiere Cast Recording – based on the critically acclaimed musical that has sold out hit productions across the US and Canada – is available on CD online and in stores. The album was released in digital and streaming formats earlier this year. The show features book, music and lyrics by Jacob Richmond and Brooke Maxwell. The album is produced by Brooke Maxwell, who also serves as music director and conductor, and provides arrangements and orchestrations. Kevin McCollum (Six, Mrs. Doubtfire, Rent, Avenue Q, In the Heights, [title of show], The Drowsy Chaperone,Something Rotten!)and Morris Berchard (The Color Purple, Hand to God, Something Rotten!, Ragtime) serve as executive producers. Ride the Cyclone will be coming to theatres around the country. Sign up for news and updates at RideTheCycloneMusical.com. To stream or download the album, or order the CD, please visit ghostlightrecords.lnk.to/ridethecyclonePR

Ghostlght Records will also release the original cast album of the new musical Space Dogs on January 28, 2022. The show features music and lyrics by Van Hughes and Nick Blaemire, who also perform the show. Space Dogs will debut at New York’s MCC Theater, directed by Ellie Heyman, from January 11 to February 20, 2022. Tickets go on sale on Wednesday, December 8, 2021. Starting today, customers who pre-order the digital album will immediately receive the track “The Space Dogs of the Cosmodrome.”  The album is produced by Van Hughes and Nick Blaemire, with Kurt Deutsch serving as executive producer. Pre-order now at ghostlightrecords.lnk.to/SpaceDogs

Space Dogs tells the heartbreaking, mind-blowing true story of Laika and the Chief Designer — a stray dog and the top-secret Russian scientist who sent her to space during the Cold War. The show is a sweeping, kaleidoscopic tale of invention, betrayal, international political intrigue, and the immortal friendship that exists between man and dog, as they journey together to the stars. More on the show is at mcc.theater/spacedogs.