In an exciting New York hotel first, The Pierre New York, A Taj Hotel announced today The Wicked Ozdust Series, an intimate set of performances leading up to the acclaimed musical’s 15th anniversary this fall. 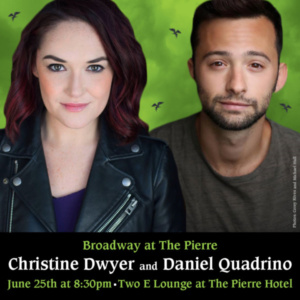 “Wicked continues to excite audiences here and all over the world,” said General Manager François-Olivier Luiggi. “We are thrilled to welcome the show back to our Two E stage during this milestone year, and proud to give fans the chance to see some of Wicked‘s most beloved cast members in the intimate setting of Broadway At The Pierre.”

The Broadway sensation Wicked looks at what happened in the Land of Oz…but from a different angle.  Long before Dorothy arrives, there is another young woman, born with emerald-green skin, who is smart, fiery, misunderstood, and possessing an extraordinary talent. When she meets a bubbly blonde who is exceptionally popular, their initial rivalry turns into the unlikeliest of friendships…until the world decides to call one “good,” and the other one “wicked.”

Winner of over 100 international awards including the Grammy Award and three Tony Awards, Wicked has been performed in over 100 cities in 14 countries around the world (U.S., Canada, United Kingdom, Ireland, Japan, Germany, Holland, Australia, New Zealand, Singapore, South Korea, The Philippines, Mexico, and Brazil) and has thus far been translated into six languages: Japanese, German, Dutch, Spanish, Korean, and Portuguese.

Based on the novel by Gregory Maguire, Wicked has music and lyrics by Stephen Schwartz, and a book by Winnie Holzman.  The production is directed by Joe Mantello with musical staging by Wayne Cilento. Wicked  is produced by Marc Platt, Universal Stage Productions, The Araca Group, Jon B. Platt and David Stone.

A New York icon, The Pierre, A Taj Hotel continues to set the standard for timeless elegance and

Originally the Gentlemen’s Library when The Pierre opened in 1930, Two E Bar & Lounge has become one of the most beloved venues at The Pierre, A Taj Hotel. Its coveted traditional Afternoon Tea menu is created by a full in-house pastry team. At night, Two E transforms into a stylish bar that serves up handcrafted cocktails complemented by small plates. A Neo-Classical lounge, Two E was designed to reflect a chic Upper East Side residence. www.thepierreny.com/dining/twoebar/