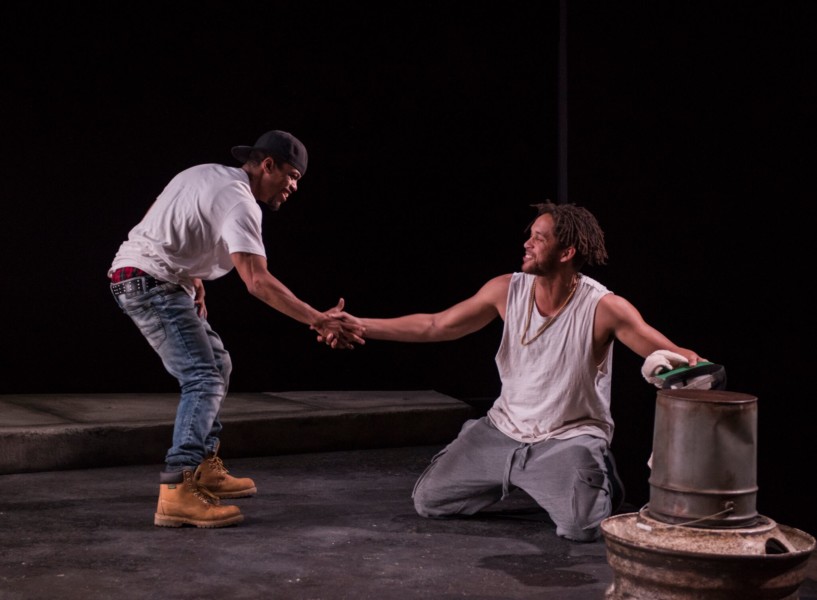 Steppenwolf’s Pass Over – Confrontational Not Comfortable

Steppenwolf’s Pass Over – Confrontational Not Comfortable 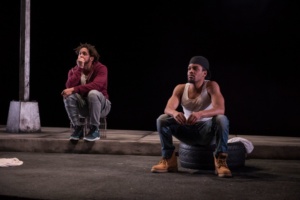 The role of the playwright in the contemporary performing arts is to write dramatic material for the purposes of performance within the theatre. To sculpt the clay that is the fundamental core of the piece, as it were. Antoinette Nwandu’s world premiere Passover is a complex, funny and often shocking sculpture, as polarizing as it is poignant. Her work, now on the stage at Steppenwolf Theatre Company, is an unflinching piece, holding an uncomfortable mirror in the face of the blatant racism plaguing today’s society. Before writing this show off as just simple #BlackLivesMatter propaganda, the survival story of unarmed black men when confronted by armed police officers is utterly terrifying. A quick 15 second Google search listed the names and cases of Philando Castile, Terrence Crutcher, Eric Garner, Mike Brown, Sean Bell, Tamir Rice, Freddy Grey, Aiyana Jones, Trayvon Martin, Ramarley Graham, and Jonathan Ferrell, all unarmed people of color, and all shot to death. This list barely scratches the surface. I promise you, I do not have all the magical answers to solving decades of institutionalized racism. I sincerely wish I did. This brings me back to Nwandu’s provocative, affecting, at times humorous then instantly horrifically frightening new play. To call this material edgy would be an understatement. The profanity-laced script is told in today’s unapologetic and confrontational vernacular. The “n-word” flows freely and often. Theatre, by nature, is not always supposed to be warm and fuzzy. My advice when attending is to check your white privilege at the door and hold on for the ride of your life. 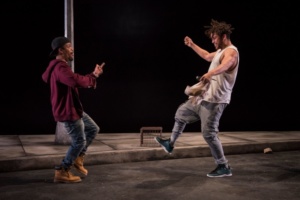 The central story here focuses on two youth, Moses (Jon Michael Hill) and Kitch (Julian Parker) as they hang out over the weekend on a street corner, under a streetlamp. Both wishing to “Pass Over” to a better life, whether that means “moving on up” to a nicer neighborhood and more affluent career opportunities, or ending their lives in this harsh reality, with the hopes of having their soul’s transcend or “pass over” to a higher plane. Without sounding too existential, the story does draw much inspiration from Waiting for Godot. While conversing, rapping, dancing, and snacking on a piece of stale pizza crust, the two young Black men are ever aware of the omnipresent danger that surrounds them, reinforced by Ray Nardelli’s sound effect drive-by shooting bullets. Representing the plight of young Black men in this country, Hill and Parker are immediately likeable and draw the audience in to both of their characterizations. We want to see them succeed. We want them to grow and prove their worth beyond their current aimless situation under a streetlamp. 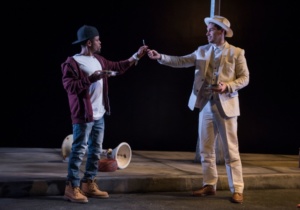 Disrupting their world, two ostensibly polar opposite white characters, both played by Ryan Hallahan. The first, a white southern gentleman who has lost his way from his mother’s house, carrying with him an oversized picnic basket.  With the uncomfortable character name, Mister, Hallahan is the epitome of white privilege, a soft-spoken, pseudo-intellectual from the south, his crisp linen suit and dapper cap a perfect accent to his picnic basket of untold bounty. Who carries fried chicken, hamburgers, hot dogs, collard greens, dim sum, fresh fruits, pies and more in what was to be a simple picnic between mother and son? I can only assume he took a wrong turn when heading to the opulent picnicking of the Ravinia Festival Park. I can only surmise this character works as a metaphor, representing  Affirmative Action and other good-faith efforts by White society to level a skewed playing field. If Mister initially represents all the good from the White society, the cop character, Ossifer, a borderline sociopath who is brought in to harass and intimidate the duo, is the bad. Explosively confrontational, his use of brute force and profane language made the audience squirm as much as it did the two protagonists. I don’t wish to spoil the shocking ending, however I will say the conclusion of this intense one act play left me absolutely speechless and rendered my plus one for the show, Susan, reduced to uncontrollable, sobbing tears. 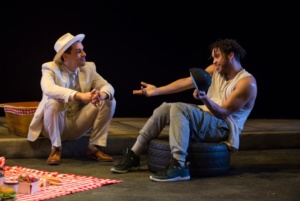 Directed by Danya Taymor, Steppenwolf’s Pass Over is a bold, dramatic story that confronts, head on, the never-ending cycle of violence and racism in the world today. Told here through the voices of two young men of color whose only crime is hanging out on an everyday street corner while being Black. These two friends aspire for more against a world structured to systematically keep them from obtaining their goals. Hill and Parker are entirely believable and compelling as these young buddies. The everyday costuming crafted by Dede Ayite reinforces their life station. Wilson Chin’s simple scenic design works well. The half deflated basketball doubles as both a literal pillow for Moses as well as a metaphor for their untapped potential.  Marcus Doshi’s lighting design was subtle in the conversational scenes between the boys and harsh during the frightening and nightmarish dream sequences toward the end of the show. 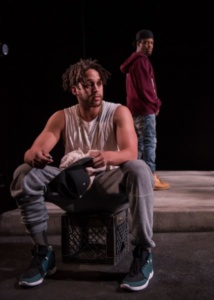 Clearly reinforcing the point of the #BlackLivesMatter movement, there is no question here Nwandu’s is absolutely affirming black lives DO matter. The electrifying performances brought to life the uncomfortable clashes between races, reinforcing who has and is abusing their power against those who clearly don’t. The final lines of the piece torn directly from any CNN or Fox News sound bite. Shocking, dumbfounding and frighteningly real. Steppenwolf’s Pass Over is a confrontational, not comfortable, theatrical experience. Shaking up and startling their captive audience, Pass Over will stay with you long after you have left the theatre. 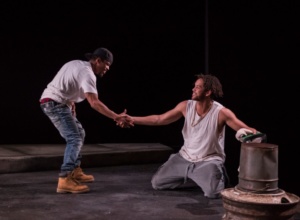 Steppenwolf Theatre Company’s Pass Over is now playing through July 9, 2017

RossJanuary 2, 2023
Read More
Scroll for more
Tap
Death Comes for the War Poets: And Glad to See Her.
My View: Inside The Barrington Stage Co. Gala