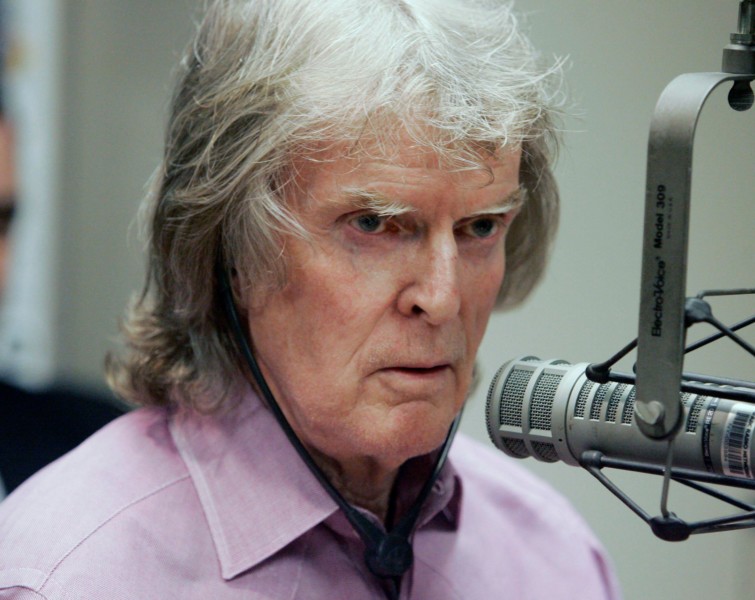 Popularly known as just Imus, he died Friday morning after having been hospitalized Christmas Eve at the Baylor Scott and White Medical Center in College Station, Texas, the family said in a statement. he had been suffering from a lung ailment.

“Shocking news on the passing of my friend, Don Imus,” radio host Mike Francesa tweeted. “He will long be remembered as one of the true giants in the history of radio.”

Imus’ popular radio show, Imus in the Morning, aired from June 1, 1968, until March 29, 2018. His show created a template that paved the way for people ranging from Howard Stern to Joe Scarborough whose Morning Joe show took Imus’s place on MSNBC.

“Turn out the lights,” Imus tweeted when he announced his last show would air in March 2018. “The party’s over.”

During his career, he received acclaim for his charity work as well as scorn for his comments about the women’s basketball team at Rutgers University.

Imus told a reporter that he didn’t have many regrets in his career but that the Rutgers incident was as close to one as he ever had.

“Mostly, I said what I was thinking,” he said. “It may not have always worked out.”

Imus had an almost 50-year career – from his first radio job in Palmdale, California, to Cleveland, where he was named disc jockey of the year in 1970, to his years in New York, working at WNBC, WABC, and WFAN where he became a superstar.

He would later admit it was not always such a great thing, fighting alcoholism and a cocaine addiction at different times.

Imus was also never shy about saying what was on his mind. It was not something that always went his way.

He called Oprah a “fat phony” and, in 2007, the members of the Rutgers women’s basketball team were “nappy-headed hos.”

It was a comment that almost ended his career, with the Rev. Al Sharpton leading protests and boycotts against Imus and his advertisers.

Then-senator Barack Obama said that Imus “not only crossed the line, he fed into some of the worst stereotypes.”

While Imus eventually met with the team and apologized, it was not enough to save his show. CBS Radio canceled his show as did MSNBC, which had been simulcasting the show.

The banishment was short lived. Eight months later, he was back on the radio – WABC, this time – and, on television.

“Dick Cheney is still a war criminal,” he said in his first show back. “Hillary Clinton is still Satan. And I’m back on the radio.”

His most well-known venture in charity was the Imus Ranch in Ribera, NM, a 3,400-acre facility where provided cowboy experiences for kids battling cancer as well as for kids who had lost a brother or sister.

Imus sold the ranch in 2014 after he fell and broke a hip. Much of the roughly $12 million from the sale was distributed to similar nonprofit organizations.

Imus was born in Palmdale, CA, in 1940. Along with his brother, Fred – who would later be a regular guest on Imus’ radio shows – Don Imus was raised in Arizona.

A spokesman for Imus’ family, Matthew Hiltzik, stated that they will hold a small private service in the coming days.

He also said the family asks that any donations be made to the Imus Ranch Foundation, which continues to provide resources to other charities that support families of children suffering from cancer and other illnesses.

It was at the ranch that Imus met a 10 year old kid battling leukemia, Zachary Cates. Imus and his wife would eventually adopt Zach. That kid, who beat leukemia, is now Lt. Zachary Don Cates.

Hiltzik (also Alec Baldwin’s rep), the family spokesman, says that Cates is returning to join his family after having finished military service overseas.

Imus is survived his his wife, Deirdre, and their children, Wyatt, Zach, Nadine, Ashley, Elizabeth and Toni.

A true innovator of the shock jock routine, Imus and Stern had a famous falling out which never healed. It’ll be interesting to see what, if any comment, Stern has.

Joe Scarborough, who replaced Imus in MSNBC’s morning lineup, tweeted that Morning Joe owed its format to Imus. “No one else could have gotten away with that much talk on cable news,” Scarborough wrote. “Thanks for everything, Don, and Godspeed.”

I had been a guest of Imus and found his irreverent humor quiet appealing. He always said exactly what he was thinking, which in this day and age is quite refreshing. I also recall his long-suffering aide-de-camp Chapels McCord.

The title of Jerry Herman’s autobiography was Showtune, and if there ever was a Broadway composer who wrote good, old-fashioned, hummable show tunes, it was Jerry Herman.

“One way to understand his songs, individually and also collectively,” she said, “is to recognize the happiness that he had when he was young. And that is what he was trying to replicate. And when he says, ‘The best of times is now,’ he genuinely means it.”

Born July 10, 1931, Herman grew up in Jersey City, N.J. His parents held elaborate costume parties and took him to the theater often. Seeing Irving Berlin’s Annie Get Your Gunchanged his life, as he told NPR in 1994. “I walked out of that theater singing all those wonderful Berlin songs and, from that moment on, that’s all I wanted to do with my life,” he said.

Herman had some modest success on and off-Broadway in the late 50’s and early 60’s, but didn’t hit the big time until producer David Merrick called him about working on an adaptation of a Thornton Wilder play, The Matchmaker.

“I went home with a script that he had given me to look at,” Herman told NPR, “and I wrote four songs over a weekend, and came back to his office on Monday morning with four brand new songs and bowled him over, not only with the songs, but with the speed that I had been able to work at. And I got the job!”

Not only did the 1964 show, starring Carol Channing, become a smash hit, it won Herman his first Tony Award. A recording of the title tune by Louis Armstrong knocked the Beatles off the Hit Parade, Herman said in 2000

“When a man from my publishing company called me and said, ‘Louis Armstrong wants to record that,’ I laughed,” Herman recalled. “I thought it was the silliest idea that I had ever heard! And when I heard the recording, I fell out of my chair, because he turned my 1890’s valentine into one of the most famous pop songs of all time!”

Jerry Herman’s next show, Mame, starring Angela Lansbury, was another smash. He says he wrote songs for the eccentric character of Auntie Mame in memory of his mother, who passed away when he was a young man.

“It really was very natural material to me, because I had a mother who was a glamorous lady who believed in all the things that Mame believes in. And so, I didn’t have to study the subject matter! I grew up with it.”

But as the 1960’s came to an end, Jerry Herman’s kind of bright, gaudy show tunes seemed to go out of style. He suffered several failures in a row. Then, in 1983, he wrote the gay-themed hit, La Cage Aux Folles, which won him a second Tony.

Shortly after the show opened, Herman’s companion, Marty Finkelstein, died of complications from AIDS. And Herman was diagnosed as HIV-positive at a time when that seemed like a death sentence.

Herman was one of the first people to receive the complex cocktail of drugs which has kept so many HIV patients alive, and he helped raise millions of dollars for AIDS research. Co-author Stasio says Herman’s HIV status spurred him to write his memoirs — and to also set some things straight.

“One thing that really got him mad was he thought people really felt he was putting it on, the optimism and the joy and the happiness and the way he loved life. And he wanted to make it clear that it was true; he did. He loved every minute of life.”

KATZENJAMMER — I really don’t understand all the kerfuffle about the movie version of Cats. It was a odd play from the get-go and, maybe, should never have been made into a movie. The day after the disastrous reviews which  practically killed it cold, the studio released another digitized version (whatever that means) that was suppose to be better. If anything it killed it even more.

Sure, “Memory” is a great song … but, that’s about it. Turns out, the biggest loser in all this just might be Taylor Swift, who was drafted into writing a song with Lord Andrew Lloyd Weber. Here’s our colleague Roger Friedman’s take on that mess: https://www.showbiz411.com/2019/12/27/cats-movie-disaster-has-handed-taylor-swift-huge-flop-for-song-she-wrote-soundtrack-has-sold-just-2-6k-copies

For the record, I have no plans to see it.

SHORT TAKES — Netflix’s Lost In Space (their second season) returned on December 24. I’ve only viewed the first six episodes (out of 10) and although the plot has been altered a bit (in that they’ve arrived safely home) it is still chock full of surprises and terrific special effects. One wag said they played it mostly safe this season and I concur. The individual character arcs of their premiere season are somewhat missed and the robot doesn’t even appear until the end of episode six! Check out this from Den Of Geek: https://www.denofgeek.com/us/tv/lost-in-space/285107/lost-in-space-why-the-third-times-the-charm?utm_source=Den+Of+Geek+US&utm_campaign=e6ff54763d-EMAIL_CAMPAIGN_2019_12_26&utm_medium=email&utm_term=0_bb43dbbe54-e6ff54763d-75088249  … Songwriter-extraordinaire Allee Willis passed last week. Tremendous and unique talent. Check out this from the Washington Post: https://www.washingtonpost.com/local/obituaries/allee-willis-who-co-wrote-earth-wind-and-fires-good-time-hit-september-dies-at-72/2019/12/26/366e840a-274b-11ea-b2ca-2e72667c1741_story.html … We finally got a copy of that Debbie Harry book Face It, and I am happy to report that its as fantastic as many reviews have said. From fan-art, to vintage photos … its just a terrific read. No thanks to Ed Faulkner at HarperCollins. What kind of shop are you running over there Ed? … Robert Miller’s Project Grand Slam will play at My Father’s Place on Friday,

February 23 …100 fans will spend NYE with Micky Dolenz and his close friends and family this week, at the historic Lambertville Inn located in Lambertville, New Jersey. An evening of Fun, Friends, Dinner and Dancing will be the backdrop for the party of the year. Also, speaking of Mr. D, we’ll have some exciting news shortly on Micky returning to a performance in NYC. Stay tuned … This year’s Light of Day event will hold court at Steve Walter’sCutting Room on January 15 …

SIGHTING: At Bar D’O performance at Indochine, social-influencer Wendy Stuart Kaplan; photographer extraordinaire Ellen Von Unwerth; performer Joey Arias; and producer Nick Lion … Eddie Murphy’s return to Saturday Night Live, after 35 years, was terrific. Honestly, I thought his brilliance kind of showed what a somewhat lackluster cast the show has had of late. Don’t get me wrong, the cast is strong, but nothing like the trailblazer Murphy was. Even when he messed up a line, he brought it all back home. Best ratings in two years for the show too. Truly memorable … We caught Greta Gerwig’s new take on the classic Little Women. Though a tad long and a bit hard to follow the frequent time shifts, it was a righteous production. Emma Watson, from the Harry Potter-series, was awesome. recommended for sure …Hard to believe it’s the end of a decade and the start of another. HAPPY NEW YEAR!