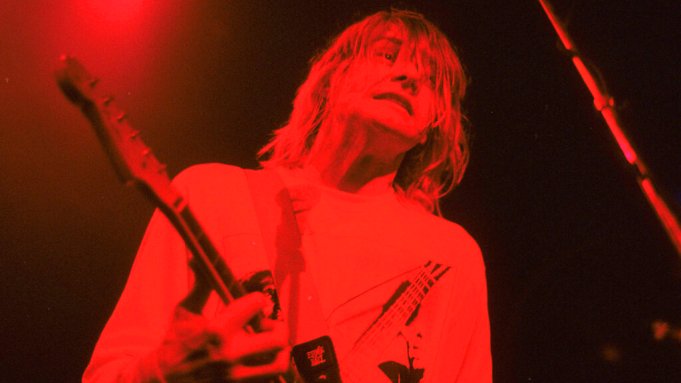 ELDEN CANCELED — (Via Deadline) A federal judge has tossed a lawsuit brought by a man who, when he was a baby, was featured on the cover of Nirvana’s Nevermind album more than 30 years ago. Spencer Elden sued Nirvana, record companies, Courtney Love and others last summer, claiming that the album cover violated federal criminal child pornography laws and was “commercial sexual exploitation.

”Elden’s parents never signed a release authorizing the use of the photos taken of the four-month-old baby in a Pasadena aquatic center in 1990 and Elden received no compensation, his lawyers alleged.U.S. District Judge Fernando M. Olguin on Monday granted the defendants motion to dismiss the lawsuit. But the judge also said that Elden would get “one last opportunity” to amend his complaint by Jan. 13.In their motion to dismiss, the defendant’s attorneys argued that Elden’s claims were time-barred by the statute of limitations. But they also contended that they would win the case on the merits, arguing that Elden “has spent three decades profiting from his celebrity as the self-anointed ‘Nirvana Baby.’”“Elden’s claim that the photograph on the Nevermind album cover is ‘child pornography’ is, on its face, not serious,” their attorneys wrote in their brief. “A brief examination of the photograph, or Elden’s own conduct (not to mention the photograph’s presence in the homes of millions of Americans who, on Elden’s theory, are guilty of felony possession of child pornography) makes that clear.”Geeze, what a surprise. I saw the attorney on CNN with Chris Cuomo (before he was canceled) and Cuomo raked her over the calls mercilessly and predicted it would get tossed. A sad, sad case for sure. Watch Elden try to sue the attorney now! That’s my prediction.

EPPY RISES — When the owners of the Roslyn Hotel tried to exercise some control over the re-opened My Father’s Place and prevent it from moving on and claiming rights to the name, lawsuits got thrown literally every which way. I spoke to Michael ‘Eppy’ Epstein yesterday and all seems to be moving towards a satisfactory resolution for all concerned. When or not the club will rep-open in that space still seems a point to be discussed.

It was a lush room with terrific acoustics and site lines. It was like a supper club, but with Eppy lording over the room, it was a class act from the word go. I was there for the re-opening (June 29, 2018) and loved it. Robert Miller’s much-missed Project Grand Slam played a terrific set there and Micky Dolenz had two sold-out shows. Eppy will do promote several shows at an as yet unannounced  North Shore venue in Glen Cove while settlement talks go on. Eppy’s a living legend.

SHORT TAKES— (Via BroadwayWorld.com) BroadwayWorld is saddened to report that Allan Larson, the father of late playwright and composer Jonathan Larson, has died. Allan, along with his late wife Nanette, and daughter Julie, created the Jonathan Larson Performing Arts Foundation following the playwright’s death in 1996. From 1997 to 2008, the foundation awarded grants to musical theatre composers, lyricists and book writers. Following the 2008 grants, the program was shifted to the American Theatre Wing, where it continues as the Jonathan Larson Grants. Allan Larson’s death was announced on Twitter by Lin-Manuel Miranda, who directed the Netflix adaptation of Jonathan Larson’s autobiographical musical, tick, tick…BOOM! “Faced with unimaginable loss, he made his son’s legacy his life’s work,” Miranda wrote. “For years, anywhere Jon’s work premiered in the world, Al would be there to tell the assembled casts about his son Jonathan. Rest in peace, Al. Thank you for your trust & friendship. Miss you already” … And, the more I think about it, Andrew Garfield in tick … tick …BOOM was just magnificent, and the direction (by Miranda) was superb. He’s just got to get a Best Actor nod …

Like it hate it, NBC’s This Is Us was a huge, huge show. Watching the pre-interviews before the start of their final sixth- season, I definitely got the feeling that there was a huge camaraderie with the cast, and that’s always great to see. Me, I loved the show and will be sorry to see it go. Here goes.