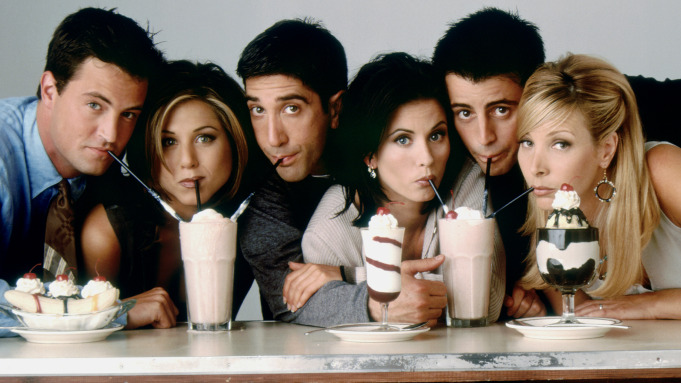 FRIENDS FOREVER — (Via Deadline) Months after the 25th anniversary of its launch, the cast of the iconic comedy series Friends is expected to get together for an unscripted reunion special. It will help launch the upcoming streaming platform HBO Max, where the Friends library is one of the main attractions.

Following tough negotiations, we hear Friends stars Jennifer Aniston, Courteney Cox, Lisa Kudrow, David Schwimmer, Matt LeBlanc and Matthew Perry have reached an agreement in principle with series’ producer Warner Bros. TV to do what I hear would be an hour-long special. No one would comment, but I hear each of the six stars will be paid in the $3 million-$4 million range for appearing in the special.

The total spent on talent in the special, said to be about $20 million, is in line with what Netflix has been shelling out for top comedians to headline hour-long specials, including Dave Chappelle, Chris Rock, Ellen DeGeneres and Amy Schumer.

Friends has been in the zeitgeist with the worldwide celebration of the show’s 25th anniversary. Aniston’s selfie with her Friends co-stars Cox, Kudrow, LeBlanc, Perry and Schwimmer set a Guinness World Record for the fastest to reach 1 million followers, underscoring just how hugely popular the show continues to be.

During a Friends 25th anniversary panel at Tribeca TV Festival in September, Kauffman and Crane shut the door on possible reboot or scripted reunion that would revisit the characters and stories from the hit series.

And a reboot? No. “It’s not going to beat what we did,” Kauffman said.

Added Crane: “We did the show we wanted to do. We got it right, and we put a bow on it.”

So, 3 or 4 million to sit around for an hour and discuss the show? Where do I sign up?

SEXTON IN AT WOR — Premier Networks evening host Buck Sexton will add a one-hour local show 6-7 PM (ET) weekdays for news-talker radio WOR starting Monday, February 10th. The former CIA officer and conservative pundit will continue to host his three-hour nationally syndicated show along with the WOR show. His new local show fills the gap left by the cancellation of Joe Concha and Cooper Lawrence’s WOR Tonight; the station has been airing an hour replay of Len Berman and Michael Riedel’s morning show at 6 PM since Concha and Lawrence exited last month.

“I’m thrilled at this opportunity to speak to my fellow New Yorkers in drive time on the airwaves of the legendary WOR,” said Sexton. “I grew up in this city and worked to defend it as part of NYPD Intelligence. I love this town, it’s my true home — and that’s the passion and experience I’ll bring on air every night to WOR.” PD Tom Cuddy said, “As listeners drive home, we’re thrilled to have a native New Yorker and talk host with Buck’s credentials to bring them up-to-date on what they missed during the workday.” Seen in the pic (L-R):  WOR’s Scott Lakefield; Sexton; and, Tom Cuddy, WOR.

SHORT TAKES – The embattled-head of the Luxe Hotel group officially unveiled his new NYC-based hotel last week to a less than packed crowd: the new Luxe Life Hotel on 31st street. He also tub-thumped his book Living the Luxe Life, that he wrote with celeb-scribe Mark Bego; who wasn’t there either. We also didn’t spot Skyhorse Publishing-chieftain Jay Cassell who had released the book last September (after it was supposed to be released in May). A formal gala event at Harkham’s Luxe Sunset hotel – see picture with Harkham; Mary Wilson and Bego – went off dashingly … This Wednesday is the NY-premier of Robbie Robertson’s Once Were Brothers. We were invited, then not-invited. Robbie’s album of last year, Sinematic, is still our album of the year for 2019 … Last Thursday; Robert Miller’s Project Grand Slam 2018 show in Serbia was broadcast on Serbian TV. Their album, Greetings From Serbia is the audio release from the show. Miller and PGS perform this Friday at My Father’s Place in Long Island …

David Byrne has been announced as the musical guest for the February 29 edition of Saturday Night Live. He will join host John Mulaney. Byrne appeared onSNL with Talking Heads in 1979 and appeared once again as a solo artist in 1989. Byrne and Mulaney worked together on Mulaney’s most recent Netflix special, John Mulaney & the Sack Lunch Bunch. At the time of the episode, Byrne will also have wrapped up his Broadway run of American Utopia, which runs through February 16. If you can’t make it to a Broadway showing of American Utopia, don’t worry – it was recently announced that Spike Lee will direct the filmed version of the Broadway event … NBC’s New Amsterdam received a three-season renewal this week. The Ryan Eggold-led show is just brilliant. Terrific writing and terrific acting. Really one of the few gems on TV … Publicist Peggy Siegal was one tough nut to crack. From working with the legendary Bobby Zarem (now passed) she became to go-to choice for studios and the Hollywood elite. Then, a perceived relationship with Jeffrey Epstein, derailed her career. In the new Vanity Fair, the article Peggy Siegal Regrets is a harrowing tale of what happened. I’ve known Peggy for decades and always got along with her and always applauded her efforts. She really did have a handle on this business and her events were well thought out and well executed. Did she have a deep relationship with Epstein? I really don’t know. So, he was invited to some of her events … but, so was Prince Andrew. Honestly, I think she just got caught up in a dreadful game. Here’s the article:https://www.vanityfair.com/hollywood/2020/01/peggy-siegal-sends-her-regrets …

Adriana Kaegi (ADDY.Media) was front and center at NYFW: seen here with Turkish designer Hakan Akkaya. He was the first Turkish designer who attended Who’s Next Paris and Bread&Butter Berlin Fair with his menswear collection in 2012. He had attracted great interest with his fashion shows both men and women collections for eight seasons in Mercedes Benz Fashion Week İstanbul … and, RIP Kirk Douglas.

Magda KatzAugust 6, 2022
Read More
Scroll for more
Tap
BroadwayCon: Six the Musical, Beetlejuice, Moulin Rouge and Jagged Little Pill
He Says: 2ST’s Grand Horizons Breaks Down Walls to Get to the Core of What Love Means