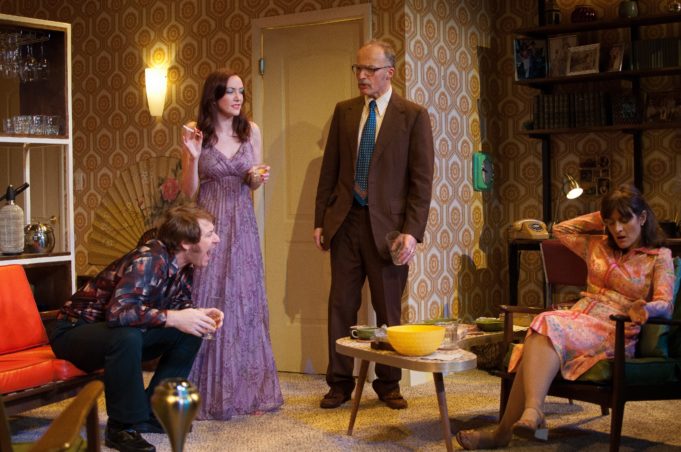 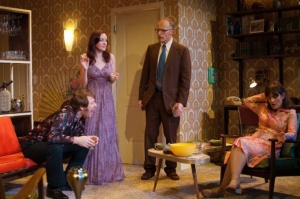 Anytime there’s an opportunity to see something created by award-winning British playwright/filmmaker Mike Leigh, it’s usually a worthwhile experience  — though it’s not necessarily a pleasant one. 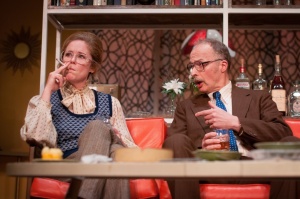 While rife with humor, The Pond Theatre Company’s recent production of Leigh’s 1977 play Abigail’s Party makes for an engaging, though sometimes frustrating, work. It’s not frustrating because of any flaws in the writing, acting or staging — in fact the prim and proper setting of a 1970s English middle-class living room offers an ideal setting for the acidic and dark experience that was offered on this stage. The Pond, a brand new theater company focused on Irish and British plays (this is its inaugural production) did a bang-up job with both this cast and the direction by Lee Brock. 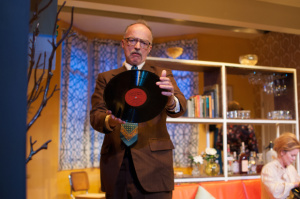 Rather, it’s the characters themselves that make it torturous, not because of any artificiality in dialogue or action; rather, it’s because the people are so real you want to step on stage and smack them few times throughout the two hours that commences here.

Pop songs insinuate themselves throughout the play which reveals the banality of these characters as they come in and out of this living room. Once the boozing begins, the action gets launched and the acidic dialogue really kicks in.

None of the characters are particularly bright or interesting; they really have nothing significant to say. And most annoying is Beverly who pushes everyone into guzzling more drink — as if to excuse her own angry, stupid uptightness and her need to justify her own failings which get smoothed over by intoxication. Though it seems like she just wants everyone to enjoy themselves she’s really catalyzing chaos through her own self-loathing.

The basic action is deceptively simple. Set in the London suburb of Essex, Beverly (Sarah Street) and Laurence (John Pirkis) invite new neighbors Angela (Lily Dorment) and Tony (Nick Hetherington) over for a welcome drink. They’re joined by Susan (Colleen Clinton), another neighbor whose 16-year old daughter Abigail is having a party at her flat. She’s come to the neighbor’s flat to escape the party’s outward chaos only to experience an inner turmoil stirred up in this tacky living room.

As they drink throughout the night, they comically and tragically drop their guard — and emotional disaster ensues. The anger inherent in much of Leigh’s material is really present here with little ornamentation. His goal of flailing the English middle class is succinctly accomplished. And this early work of his illustrates the evolution of themes he explores in later plays and films.

Much like American playwright Neil Labute, Leigh unapologetically shows how ridiculous people can be in the most conventional of settings but, unlike his fellow playwright, they aren’t entirely unredeemable — just boorish.

Sadly, this play’s run has ended but there are more productions coming up in collaboration with the Barrow Group (a 30-year-old award-winning theater company) at their West 36th Street home. For future productions go to: www.thepondtheatre.org

TBG Theatre at The Barrow Group