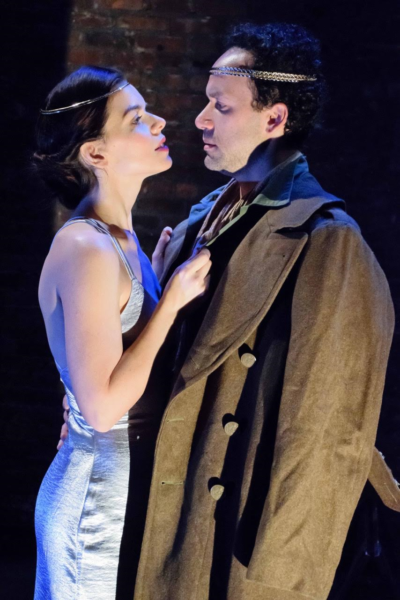 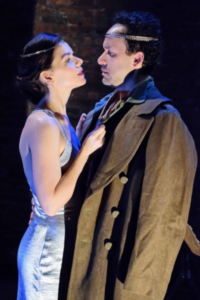 It was a star-studded night at The Sheen Center Black Box Theatre as no less than Academy Award winner (and five-time Tony Award nominee) Estelle Parsons was in attendance to watch Frog and Peach Theatre Company’s Macbeth.

The show began with instant immersion as men yielding swords flooded the stage from all directions and battled valiantly. Combat choreographer Marcus Watson made great use of the space with realism and conscious safety for all involved.

The story is as follows: after Macbeth’s defeat of Macdonald allows him to return home a hero in Duncan’s repressed kingdom, Lady Macbeth spurs him on to the bloody murder of Duncan.  Their lives spiral out of control as they desperately try to retain the crown amid witchcraft and madness.

Kate T. Billingsley shone on stage in silver lame as Lady Macbeth. Her lithe body was forgotten however as her fluid performance took over.  Madness oozed from her white-slipped aura during the famous “Out damn’d spot” sleepwalking monologue.

All of Ms. Billingsley’s wiles could not muster an ounce of mutual passion however from actor Erick Gonzalez, that played Macbeth. While Mr. Gonzalez’s delivery was measured and specific, it was not rooted in a deeper, driving force.  In contrast, Rick Roemer as Macduff was magnificent- bellowing and fighting through the true humanity of the play from start to finish. 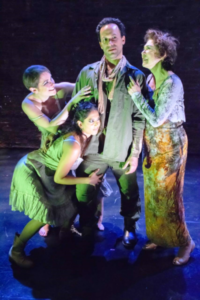 The three witches were a delight- each relishing the audience with their own seduction and power as they danced around their cauldron of spells. Dame actress Vivian Landau was a powerhouse, encouraging her witchlets to seduce. Bess Miller was strong and sexual, while Alyssa Diamond was flirtatiously sweet.

Frog and Peach Theatre Company was founded in 1996 by Actor Studio members Lynnea Benson & Ted Zurkowski, to bring Shakespeare to a wider audience. With a diverse cast and a broken fourth wall (as originally conceived by Shakespeare), they believe in respectfully trimming down Shakespeare’s scripts into a modern movie length.  Congrats to their philanthropic history of presenting an amazing seventeen shows free of charge to their audience!