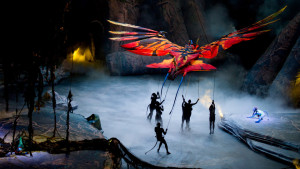 Cirque du Soleil’s Toruk: The First Flight, inspired by Avatar is so stunning, that you forget the story here is lackluster. To make up for that audience members are asked to become part of the show with their phones. Cirque uses them as part of the lighting design. If you download the app at the start of the show, you’ll get a series of texts telling you what to do with your phone. What Toruk does best is vivid imagery, amazing projections that immerse you fully into this world, Julie Taymor like puppetry (Hello, Lion King), monkeyesq blue-skinned Na’vi tribes who bend, contort and fly through the air. Directed, written by writer-directors and multimedia innovators Michel Lemieux and Victor Pilon, the show is highly ADD and it is hard to tell where to look.

Taking place some 3,000 years before the film, we are told the story via a narrator (Raymond O’Neill), who tells us of two boys Ralu (Jeremiah Hughes) and Entu (Daniel Crispin) from two different tribes, the Na’vi  and Tysal, who to save their beloved “Tree of Souls,” from volcanic destruction, need to gather five sacred objects that will allow them to control and fly the Toruk (basically a Phoenix like Terydactyl). Along the way they meet  Tysal (Giulia Piolanti). Prophecy is fulfilled when a pure soul rises among the clans to ride Toruk for the first time and save the Na’vi from their terrible fate. 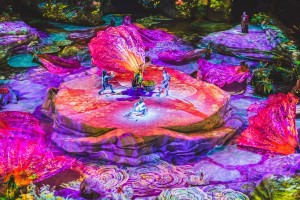 In this land lava flows, waterfalls, rivers, oceans, desserts, floating mountains and other majestic forces of nature made though vivid via projections appear to dazzle. 40 video projectors consume a 20,000-square-foot surface to emerge you into this world. Percussion in the air by Daudet Fabrice Grazai and troupe are impressive. The music composed by Bob and Bill, is at times glorious led by the soaring singing of a Shaman (Priscillia Le Foll). 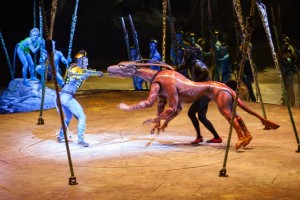 Set designer Carl Fillion has created Pandora with the Omaticaya Hometree, flowers, rocks that are trampolines to jump on fling yourself around, that make you wish you could join along. and rock island jutting up from the ground. Patrick Martel’s giant puppets, are a cross between Warhorse and The Lion King. The puppeteers move them effortlessly. 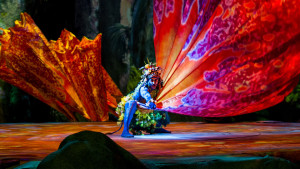 The Costume and Makeup Designer Kym Barrett has out done herself especially with the flower sequence which was my favorite and the  kite sequences is joyous thanks to choreographers Tuan Le and Tan Loc.

I would also like to say kudos to Lighting Designer Alain Lortie and Sound Designer Jacques Boucher, really well done.

When the “Spirits of Eywa” came in at the end I have to admit I shed a tear.

Toruk – The First Flight is Cirque du Soleil’s 37th production since 1984. The company has brought wonder and delight to more than 155 million spectators in more than 300 cities on six continents. Cirque du Soleil has close to 4,000 employees, including 1,300 performing artists from close to 50 different countries.

Cirque du Soleil is also presenting its new Big Top show Kurios – Cabinet of Curiosities in New York on Randall’s Island from September 29 through November 27 and Paramour, on Broadway at the Lyric Thestre.