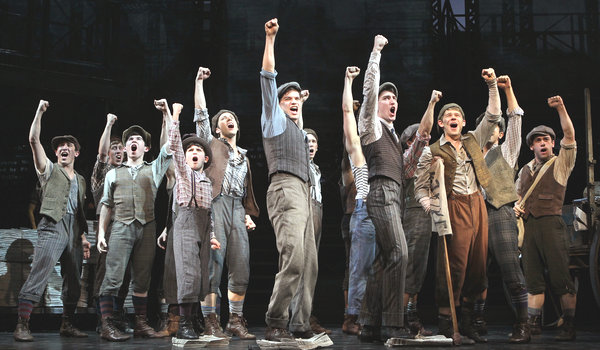 She joins Playbill’s Mark Peikert to discuss the series, the athleticism that pole dancing requires, and what to expect from the last half of Season 1.

5 pm: In The Southern Breeze Rattlestick. When a runaway slave gets lost in a mysterious forest, an Absurdist drama ensues

6pm: May Day By New York Rep. Must RSVP in advance. NewYorkRep has commissioned May Day, a new ten-minute, mini-musical by award-winning collaborators Melissa Li & Kit Yan, inspired by the mistaken missile emergency alert set off in Hawaii in 2018.

Wind, a non-binary nerd, had just reconnected with Auri, an old high school friend, when they receive a terrifying alert: a missile will strike Honolulu in ten minutes. When they meet up with Wind’s grandpa Wally, they are faced with an important choice. Will they run away or stay in place?

May Day is presented as part of the Play at Home project.

7pm: Ailey All Access: Ella and In/Side set to the music of jazz singers Ella Fitzgerald and Nina Simone.

The vivid emotions of Nina Simone’s “Wild is the Wind” play out in Mr. Battle’s solo In/Side. Originally commissioned by Dance New Amsterdam, In/Side was created as part of a celebration of the spirit of male dancers in New York in light of the AIDS epidemic.

7pm: LAO at Home: Living Room Recital By LA Opera Mezzo-soprano Gabriela Flores, a member of the company’s young artist program, teams with Gilberto Amaro for a program featuring music by Spanish composers Fernando Obradors, Joaquín Rodrigo and Xavier Montsalvatge, along with a selection of beloved Latin American songs. This program is generously supported by the Tourist Office of Spain.

7pm: A Burning Church New Ohio Theater. Staged as a religious service as part of the Ice Factory Festival, this new musical traces the lives of church leaders and congregants amid protest movements, tragedies, and spiritual rebirth. esidency Artists Zhailon Levingston, Alex Hare, and Nehemiah Luckett. With a book by Hare and Levingston (who also directs), music by Luckett, and lyrics by Levingston.

3pm and 8pm: Love, Noel Irish Rep. The songs and letters of Noel Coward, performed by Steve Ross and KT Sullivan transform into some of the many characters that made up Coward’s unique life…Gertrude Lawrence, Marlene Dietrich, Greta Garbo, Elaine Stritch, Lynn Fontanne, Virginia Woolf, Edna Ferber, the Queen Mother, and, of course, The Master himself, Noël Coward.

7pm: Humanities Symposium Series: The Brontes Join us on the set of the 1997 production of Jane Eyre. Hosted by Robert Johanson and including cast members Glory Crampton, Tom Hewitt, Ruth Moore, and Elizabeth Roby.

7pm: Offstage: Suffragist The musical “Suffragist” was due to premiere this fall. Then, everything changed.

Join the creators and cast of the show for an evening of conversation and song, as we discuss the pandemic-interrupted journey of “Suffragist,” and watch two numbers from the work in progress — their first-ever public performance.

The show tells the true story of the growing rivalry between the seasoned organizer Carrie Chapman Catt and the young radical Alice Paul, along with many other suffragists.

Then, members of the show’s cast — including Jenn Colella, Nikki M. James and Kuhoo Verma — will talk with theater reporter Michael Paulson about their experiences preparing for the show, and how “Suffragist” has shaped their thinking about our world today.

It’s the second episode of Offstage, our new series about theater-making during the pandemic.

7:30: Puccini’s Turandot A legendary Chinese princess presents each new suitor with a series of riddles; success will win her hand, but failure costs his head. One brave warrior prince rises to the challenge, determined to thaw Turandot’s frozen heart. Puccini raises the temperature to boiling by lavishing the legendary tale with some of his finest and most spectacular music—not to mention “Nessun dorma,” one of the catalogue’s most beloved arias. Combined with Franco Zeffirelli’s breathtakingly opulent production, it makes for one of opera’s grandest experiences.