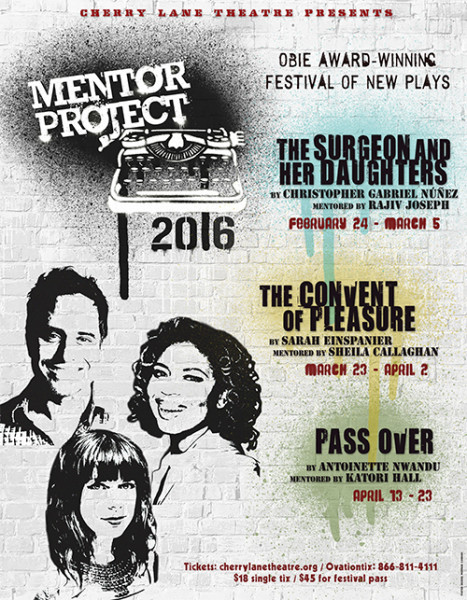 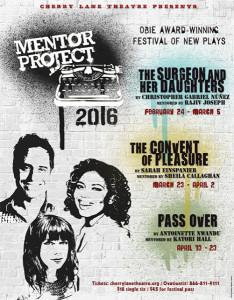 Cherry Lane Theatre’s Obie-winning Mentor Project, a program for new playwrights – will mark another milestone this year when three emerging writers are mentored by three previous Mentored Playwrights from the program’s early years, with fully-staged productions presented by Cherry Lane (38 Commerce St. in NYC) from February 24 to April 23, 2016 it has been announced by the theater’s Producing Artistic Director, Angelina Fiordellisi.

Returning to the theater where they first honed their own playwriting skills – themselves now in the role of mentors —  will be Rajiv Joseph (Pulitzer finalist for Bengal Tiger At The Baghdad Zoo on Broadway), Katori Hall (Olivier Award for Best New Play, The Mountaintop, also on Broadway), and Shelia Callaghan (Roadkill, Scab, Confidential, Lascivious Something).

Mr. Joseph will mentor Christopher Gabriel Nunez, whose play The Surgeon and Her Daughters will kick off the 18th season of Mentor Project February 24-March 5.  Ms. Callaghan will mentor Sarah Einspanier, whose play The Convent of Pleasure  will be presented March 23-April 2.  And Ms. Hall will mentor Antoinette Nwandu and her play Pass Over, performed April 13-23.  All productions are staged at Cherry Lane Theatre’s Studio Theatre at 38 Commerce St.

The Mentor Project – winner of an Obie Award for its dedication to helping young playwrights develop new work – each year partners a young author with a celebrated professional for a season of script work, rewrites, casting, rehearsals and a full production at Cherry Lane. Mentor Project is also the recipient of the James Kirkwood Award for American Playwrights.

Rajiv Joseph was mentored in 2005 by Theresa Rebeck for his play Huck and Holden.  Katori Hall was mentored by Pulitzer Prize winner Lynn Nottage for the play Hoodoo Love in 2006.   Sheila Callaghan was mentored by Michael Weller for her play Lascivious Something in 2006.

These nine playwrights – the new writers, their mentors and their mentors’ mentors – will be on hand for a December 7th kick-off event for MENTOR PROJECT 2016 at Cherry Lane Theatre.  Seri Lawrence and Janio Marrero are Producing Artistic Directors of Mentor Project 2016.

Tickets to MENTOR PROJECT performances are $18 for single tickets or all three plays for $45 with a Mentor Project membership.  For performance information and tickets, visitwww.cherrylanetheatre.org or call Ovationtix at 866 811 4111.