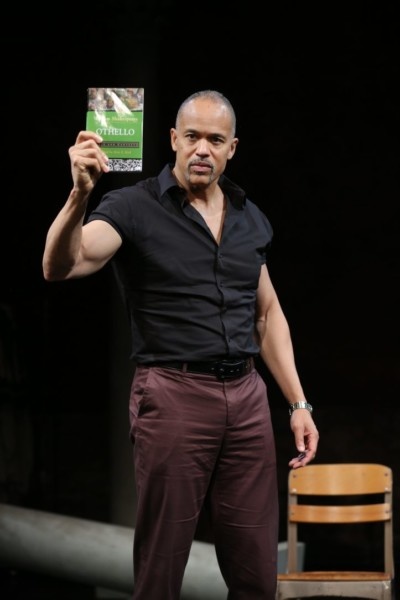 An impressive presence stalks the stage, tense and focused, saying his lines with a hurried internalized force that you can feel the muscles straining against an unmovable wall. You wonder where we are, and in what direction Keith Hamilton Cobb’s acclaimed play American Moor is heading. But we quickly find our footing. He’s running some lines before a fraught audition for the role in Othello, a part that he has been told about for far too long. This African-American actor, played by the handsome and powerful Cobb, consents to the soul crushing process of being scrutinized and dictated to by a younger white male director, who somehow believes that his vision of Shakespeare’s most iconic black character has more merit.  Race and Shakespeare, always a complicated task to navigate in the modern theatrical world. It seems some go full out, or claim color blind casting while giving out tokens to some in minor roles but casting with a traditional eye with the leads. It seems ridiculous but it doesn’t seem to be going away. What follows is not just a 90 minute play about theatre, Shakespeare, color-blind casting, and race though, but a dissection and dissertation of America as a whole, and our communal understanding of a strong African American male bursting force with anguished emotion, “coming on like a stiff prick” making all those “Mr. Director Man” characters wiggle uncomfortably in their seat.

The audition unfolds, with all the inequality and lopsidedness that exists within this process. Cobb, famously known to most as the uber masculine Tyr Anasazi on the sci-fi series ‘Andromeda‘ and as the boyfriend of the leading character in the second and final season of Logo’s ‘Noah’s Arc’ stands upright before us all, as a classical actor, baring his soul and heart in the hopes to secure the part that he seems, by all accounts, to be destined to play. It’s a complicated process, this internal dialogue that we are privy to hear and react to (thanks to the exacting lighting design by Alan C. Edwards; scenic design by Wilson Chin; costumes by Dede Ayite; sound by Christian Frederickson), and his opinions of the part and his place in the room, usually unspoken, is as steadfastly wise as his pushback is furiously delivered. It’s a powerfully honest raw piece of writing and acting, earnest and captivating, filling the space at the Cherry Lane Theatre with an intelligent ease. Physically his present is majestic, sensual and elastic, giving us nuances of all types he has experienced without diving into negativity. Completely engaging, in his humor and his rage, Cobb breaths life and dedication into this essential portrayal of the failure of many in American theatre to see beyond stereotypes, even when the thinking is liberal and supposedly color blind.

The love of Shakespeare is obvious, driving forth this project from his real life resume of roles and August Wilson parts. There’s not much this white Mr. Theatre Critic man can say about the actor’s experience of being such a man in this world, that Cobb can’t say with far more passion and understanding. “You just picked up the race deck” he bellows as this discussion is about Othello, not Richard III (a part I’d gladly go to lengths to see). His Titania is ravishing, changing the way I’ll hear that speech in the future. It’s breathtaking to witness this man’s unquestionable and inquisitive power, as directed with steadfast authority by Kim Weild (Cherry Lane’s First Love). His stance and his vantage rings true and with a magnetic power that is undeniable. Cobb’s actor stands solid in front of his own version of the Senate, confident in what he needs and wants to do, regardless of what “Mr. Director Man“, played strongly by the seated Josh Tyson (59E59’s Wolves) envisions from his privileged place out front. Breathe deep and dive in, is all I can say, and get ready to be enlightened  by his brother’s dignity, and his own. This American Moor knows what he has to say, and, eventually, through (almost) tears of uncompromised passion, takes a knowing stand against all those who feel they know better. He can’t hold back. And no one can, or should, deny this man’s his say.

Suzanna BowlingJanuary 12, 2022
Read More
Scroll for more
Tap
Meet The Cast of Paper Mill Playhouse Chasing Rainbows Part 2
The Interview: Dimitri Moise Talks About Giving the Public As Much As I Can