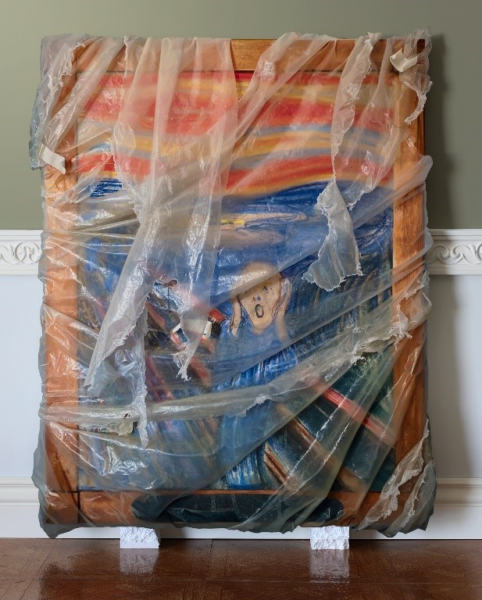 Look for Private Collection / Closed for Installation, by award-winning designer David Korins and hyperrealist artist Robin Eley will be opening in NYC this fall. The free immersive experience, located at Lume Studios (393 Broadway), will celebrate iconic lost, stolen, or privately-held works of art that are far from the public’s reach, including Jean-Michel Basquiat’s Dustheads, Edvard Munch’s The Scream, Pablo Picasso’s Le Rêve, Andy Warhol’s Turquoise Marilyn, Frida Kahlo’s Self Portrait with a Monkey, and many more.

The experience has been designed by renowned creative director David Korins, whose work includes the set designs for the Broadway musicals Hamilton, Dear Evan Hansen, and Beetlejuice: The Musical, as well as experiential design for Immersive Van Gogh, The DiscOasis, and Sotheby’s.

Admission is free and offers guests the opportunity to view Eley’s sold-out collection in person for a limited time only from September 17, 2022 through September 25, 2022.

Australian hyperrealist artist Robin Eley has been widely recognized for his diverse body of work and for recreating prominent traditional paintings and presenting them in a new way. Eley’s precise replication of the classic masterpieces and applying his contemporary technique of adding plastic wrap is more than just an illusion to trick the viewer’s perception of reality. The purposefully veiled art adds intrigue and represents each piece remaining publicly inaccessible and shrouded in mystery. The works of art confined to their packaging and remaining forever out of reach explores what it means to have access to art and its public value.

“Working with David Korins has proven to be that rarest of collaborations where the personalities mesh, the skills don’t overlap and the creative vision is fully aligned,” said artist and Co-Producer Robin Eley. “From the outset, this exhibition was the opportunity to give my work context. But David, with his myriad talents and mesmerizing intuition, has taken this context and transformed it into an experience–a truly immersive synthesis of art and space, where one elevates the other.”

“From the moment I first encountered Robin Eley’s work, I was awestruck,” said Creative Director and Co-Producer David Korins. “Over time, I became inspired to create an event that would highlight his incredible talent and amplify the deeper meaning behind the work. It is an honor to be collaborating with Robin in conceiving a fictional museum where guests can experience his innovative artwork in a new and entertaining way. I hope this exhibition will re-define what’s possible by blurring the lines between fine art gallery, immersive experience and pop culture.”

The New or Traditional Art Museum’s gift shop will display museum-branded merchandise and an exhibition monograph with an essay by Byron Hawes taking an in-depth look at the collaborative experience.