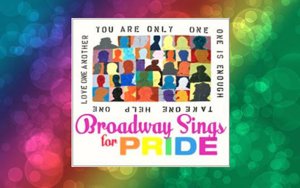 The list of events and performers are as follows:

Launched in June 2011, Broadway Sings for Pride grew out of the tragic suicides within the gay community, and we have received support from Neil Patrick Harris, Channing Tatum, Carol Channing, Bryan Cranston, Kathy Griffin, LeAnn Rimes, Bernadette Peters, Nathan Lane, Joy Behar, Wendy Williams and many others. They stage concerts and events that bring to light the challenges faced in the LGBT community, using the funds raised from these programs to aid LGBTQ youth and their families either directly or through supporting like-minded service organizations. They have been honored by Wagner College (Citizen Alum Award 2015 Honoree), Long Island Gay and Lesbian Film Festival’s 2015 Non-Profit Organization All-Star Award, Tyler Clementi Foundation’s The Upstander Legacy Honoree Host Committee Member, and a four-time nominee for “Most Valuable Campaign” & “Most Valuable Organizer” from the New Organizing Institute.