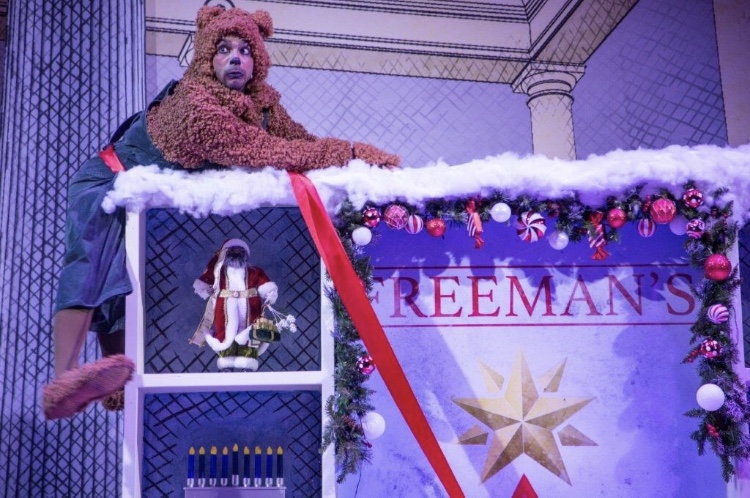 Just in time for the holiday season, Emerald City Theatre has reworked their hit, family friendly play, Corduroy, with a little tinsel and lights. Surprisingly little else changed to amend this children’s classic to the Broadway Playhouse Stage just in time for Christmas. For those not in the know, Corduroy originated as a 1968 children’s book, both written and illustrated by Don Freeman. The tale of a teddy who just wanted to belong, missing a button, but still full of optimism and hopeful cheer. This cast of kooky characters wandering about a shopping mall well after closing, will warm the hearts of young and old alike. Matching perfectly with Emerald City Theatre’s season 24 theme “A Place to Belong” I am hopeful this Corduroy quickly becomes an annual Windy City family theatrical tradition.

The story may center around a charming teddy bear displayed proudly on a toy shelf, but the action doesn’t begin until he catches the eye of precocious youngster, Lisa (Tia Pinson) purposely perusing the toy store at the local mall. Alas, Lisa’s overwrought mother (Michelle Renee Thompson) isn’t as smitten, quickly dismissing the toy as flawed since he is clearly missing a button on his overalls. After the ladies leave and the shopping center closes, the real adventure took shape as this inquisitive teddy began his determined quest for completion, to find a coordinating button to fix his overalls.  Searching from floor to floor, through sporting goods, appliances, housing and bedding, the slap-stick, impressive, physical comedy left the audience in stitches. As Corduroy, Jean Claudio masterfully cartwheels, flips and somersaults his way into everyone’s good graces. Clearly a gifted gymnast and tumbler, I dare anyone not to be smitten with the antics of Claudio’s stuffed toy. Joining him on his journey, two more impressive hysterical harlequin’s, clown one and clown two (Averis I. Anderson and Kelsey Shipley). With very little dialog, this triumphant trio wins through exaggerated movements and giggle inducing pratfalls.

Adding a little drama, the Night Watchman (Matt Miles) hot on the heels of this button seeking brown bear. The hapless security guard convinced there is a prowler on the loose in the store, completely unaware the teddy he keeps finding around the store is causing all of the mishaps and misfortunes. Will Corduroy and Lisa be reunited just in time for Christmas? Will the Night Watchman catch the elusive bad guy? Will this moxie filled mammal ultimately find his “place to belong?” What do you think?

Emerald City Theatre is the largest theater for young audiences in the Windy City.  Through their One Fund signature outreach program, hundreds of thousands of books and free tickets to plays have been gifted to under-resourced Chicago Public Schools students annually. Corduroy is not only a charming children’s fable; it is a winning live production as well.  Don’t be so quick to leave at curtain as there are a few audience sing-a-long holiday numbers as well to enjoy before you are back out in the holiday hustle and bustle of the nearby Water Tower shopping mall.  Everyone will bust their buttons for this winningly portrayed family friendly tale, Corduroy.

Corduroy is now playing at the Broadway Playhouse at Water Tower through January 5, 2020