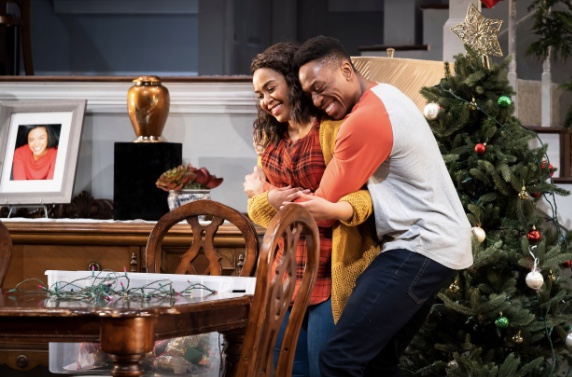 On a recent flight, my seatmate glanced over in my direction and commented we should brace ourselves for some turbulence as we began to descend. That same warning could be given when attending the world premiere family drama, The First Deep Breath, now playing at the Victory Gardens Theatre. Initially developed as part of the 2018 Ignition Festival of New Plays, Lee Edward Colston II’s entrancing and riveting character study clocks in at an overly-long, three hours and thirty minutes. Two intermissions allow the audience the opportunity to recover from the onslaught of verbal shrapnel aggressively tossed between feuding characters. Directed with precision by Steve H. Broadnax III, this ambitious epic family drama rises as the family collapses under the weight of toxic masculinity and long hidden secrets. Not for the faint of heart, this Deep Breath proves itself essential viewing.

This battling brood is led by the Reverend Albert Melvin Jones III (David Alan Anderson) an egomaniacal father, singularly focused on expanding his Philadelphia’s Mother Bethel Baptist megachurch. His focus in growing his flock and expanding his legacy constantly took priority over his own family’s wellbeing. Still reassembling the metaphorical puzzle pieces left from the shock of his recent daughter’s death, a victim of a drinking and driving accident by her own hands, the Jones’ residence is also seeing the return of son Abdul-Malik (a riveting Clinton Lowe) just released from a six-year stint in the big house from a sexual assault conviction. Twin daughter Dee-Dee (Melanie Loren) is juggling full time work, a new fiancé, compassionate male nurse Leslie (Gregory Fenner) and a mother Ruth (Celeste Williams) suffering from dementia, constantly confusing her for her deceased twin.  The youngest member, teen-aged son AJ (Patrick Agada) is being groomed for a life in ministry, although his own ambitions are more suited for a dancefloor than the pulpit. Rounding out the cast, neighborhood friend, Tyree (Jalen Gilbert) and Aunt Pearl (Deanna Reed-Foster) the sister and care-giver of the family matriarch. Each actor at the top of their respected game, it is hard to pick a favorite as each raises the level of excellence each time they step on stage.

Each of the three acts runs just over an hour, uncovering family secrets as subtly as tap dancing through a minefield. The second act family holiday meal brought out the worst in each member of this battling brood, while serving up the most delectable drama to the excitement of a very boisterous audience. While at her most lucid, Williams’ Ruth served up a platter of well-done platitudes, repeatedly bludgeoning her adult children with a sledgehammer of uncomfortable truths. Without spoiling every secret, this is one mother of scene, where loyalties are tarnished, confidences are ignored and vows were uncovered to be taken with serious regret. Infidelity, LGBTQ+ issues and toxic generational cycles plagued the complex dynamic between characters, where the very foundation of this family tree suffered the most egregious case of root rot. Can the impossible expectations of a father so consumed with his own wealth, power, prestige and legacy be met while his world crumbles beneath him? When children learn the truth about the flaws of their parents, are they doomed to repeat these vicious cycles? Can a proud black family rise above their own not so hidden homophobia and sexism to achieve their own very conditional, unconditional love? Finally, are selfless acts, really that selfless as wanton desires percolate to the surface? These questions and more are at the fundamental core of this most ambitions production.

Has Colston bitten off more than he can chew with The First Deep Breath? Certainly not, but I couldn’t help but leave the theater thinking this might benefit from being two different separate plays instead of one monolithic production. As this is a world premiere, this is certainly not a finished piece. The deterioration of family bonds is a frequently used plot device and Colston’s take is quite raw, frenetic and real. His language is rough, situations portrayed certainly go over the top and I have never been to a production where the audience was this purposely whipped up into a frenzy. I asked myself was I at the theater or the NBA Finals. At times it was tough to tell the difference. I commend the actors onstage for not flinching once as the audience so vocally agreed, or as the was the case here, often disagreed with what the characters were doing. Clearly all could relate to this Germantown, Philadelphia family, like it or not. Empathy and compassion clearly reached across all races and socioeconomic backgrounds.

Regina Garcia scenic design, a multilevel family home, proved a grounding anchor in a tempest of chaos. Christine Pascual’s real-world costuming aided an instantaneous relatability to each family member. Jason Lynch’s effective lighting, adding shades of dark of light, allowed the viewer insight into the characters as well. I say with upmost confidence, Gaby Labotka never could have guessed her fight and intimacy design would ever have such a rippling effect on an audience. An unexpected same-sex kiss in act one caused the audience to come undone. The same could be said for the act two and act three family brawls. Breon Arzell’s additional choreography is always welcomed in any production.

Captivating, challenging, unflinching and unapologetic, The First Deep Breath is a provocative world premiere. Lee Edward Coleston III mines gold, combing relatable characters, raw emotions and a troupe of high caliber actors more than up to the challenge of igniting these characters to action. Don’t be dissuaded by the play’s lengthy run time. The First Deep Breath will absolutely take your breath away.

The First Deep Breath is now playing at Victory Gardens Theatre through December 22, 2019