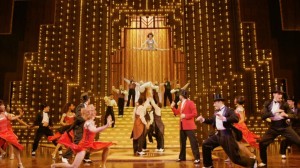 Let me entertain you and entertain they did. The set, the costumes, the voices, the aerialists, the chorography, the projections and the spectacle of it all is thrilling. Paramour, the newest endeavor by Cirque du Soleil is upping the bar and many will not be happy. Cirque du Soleil fans are getting more of a Broadway show and Broadway theatre goers are getting a taste of what shows were like when Ziegfeld ran the great white way. They all laughed at Billy Rose and he was ahead of his time. 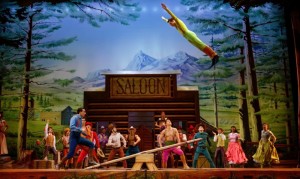 Yes, Paramour, is a little A.D.D., but aren’t all Cirque du Soleil productions? The music is unforgettable, but it is catchy when it comes to the orchestrations and the arrangements. Yes, the story is lacking, but hey have you seen most shows on Broadway this year? What this show is, is electrifying. The number taken out of Seven Brides For Seven Brothers is such an homage to Michael Kidd, that I was transfixed. I saw Seven Brides For Seven Brothers on Broadway in 1982 and the dancing was nothing like this. This was phenomenal with gymnasts defying gravity. It was like watching the movie live. 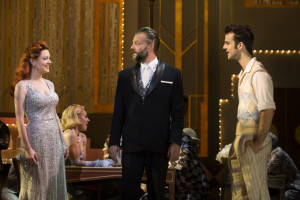 Taking place in the “Golden Age” of Hollywood, it is “A Star Is Born” with “The Red Shoes” results. Here director AJ (Jeremy Kushnier) longs for a star he can manipulate and control, who will love him. When his star of the moment chooses her leading man he goes to a nightclub to meet aspiring singer Indigo (Ruby Lewis). Indigo composes songs with a young songwriter Joey (Ryan Vona) who is also her piano player. AJ hires both on the spot. Indigo, being groomed for stardom is filmed becoming Marlene Dietrich in “The Blue Angel,” Vivien Leigh in “Gone With the Wind,” and Elizabeth Taylor in “Cleopatra.” As Joey and Indigo’s love grows the more AJ becomes possessive and maniacal. As Indigo finally chooses Joey a chase sequence finds Indigo and Joey on the run with AJ’s hired hands in pursuit. The chase commences to a roof top hotel, where the gymnasts recreate what looks like a scene out of the old series “Batman” and it is sensational. 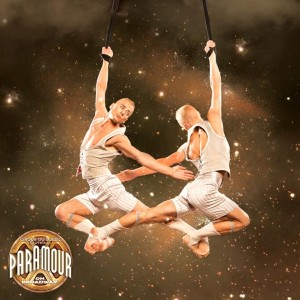 During the “Cleopatra” scene dazzling blond identical twins Andrew and Kevin Atherton, soar above the audience. Thier airborne pas de deux is sensual, electrifying and exquisite poetry in motion.

The breathtaking “Love Triangle” was set to a tango by three aerialists suspended in mid-air. Their artistry was so mesmerizing that the audience I saw it with, gave the performers close to 15-minute applause. 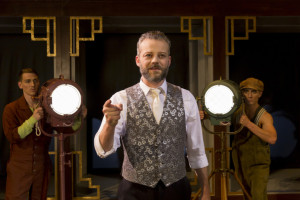 Finally somebody gave the wonderful Jeremy Kushnier more to do. This man has one of the great rock voices and he needs better material. Ruby Lewis is a star. She is beautiful, can dance, makes trite lines sound plausible and has one terrific belt. 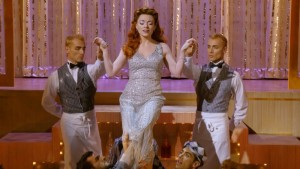 Conceived and directed by Philippe Decouflé, the production is lavish and the choreography of Daphné Mauger impressive, I just wish that Cirque du Soleil would hire better songwriters (Pasek and Paul) and better storytellers.

Despite it’s flaws Paramour gets standing ovations and audiences who appreciate what they do. My guest loved this show, as did the audience I was with. The curtain call was done to overwhelming praise.

Genevieve Rafter KeddyJune 22, 2022
Read More
Scroll for more
Tap
Gluten Free Has Options That Will Astound
The Drama Desk Awards Who Will and Won’t Win