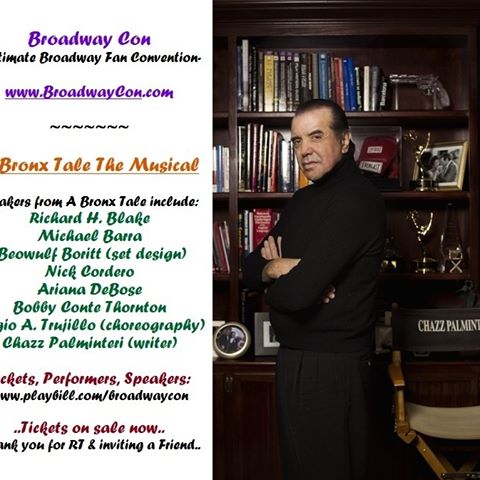 Countdown to BroadwayCon: A Bronx Tale

Countdown to BroadwayCon: A Bronx Tale 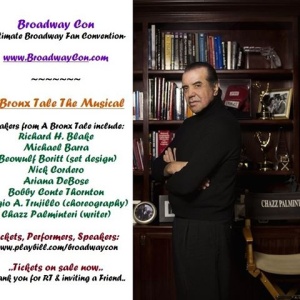 BroadwayCon® announced today that it will host a special A Bronx Tale Panel on Sunday, January 29 at BroadwayCon 2017. Join the cast and creative team of the new musical A Bronx Tale for an inside look at how the latest version of Chazz Palminteri’s story has doo-wopped its way to Broadway. The panel will feature Chazz Palminteri (Book) and Glenn Slater (Lyrics) as well as Nick Cordero (Sonny), Richard Blake (Lorenzo), Bobby Conte Thornton (Calogero), and Ariana DeBose (Jane). BroadwayCon 2017 will be January 27-29 at the Jacob K. Javits Convention Center.

Based on the critically acclaimed play that inspired the now classic film, this streetwise musical will take you to the stoops of the Bronx in the 1960s—where a young man is caught between the father he loves and the mob boss he’d love to be.

BroadwayCon is theatre’s answer to comic-con, tailor made for fans. From January 27–29, 2017, join some of Broadway’s biggest fans, performers, and creators from classic and current shows as we gather at the incomparable Jacob K. Javits Convention Center to perform, discuss, debate, and celebrate theatre. BroadwayCon 2017 will feature panels, performances, interviews, workshops, singalongs, and more, all packed into an epic three-day weekend. Past panels have included previews from upcoming Broadway shows, conversations with the casts and creatives of this season’s hits, and discussions featuring the industry’s top producers and designers, not to mention the giant Opening Ceremony, the nighttime concerts, and the dance parties. BroadwayCon is produced by Mischief Management and Playbill. The BroadwayCon Artistic Director of Headline Programming is David Alpert.
Related ItemsA Bronx taleAlan MenkenAriana DeboseBobby Conte ThorntonBroadwayConChazz PalminteriGlenn SlaterJerry ZaksNewNick CorderoRichard BlakeRobert De NiroSergio TrujilloTommy Mottola
Broadway