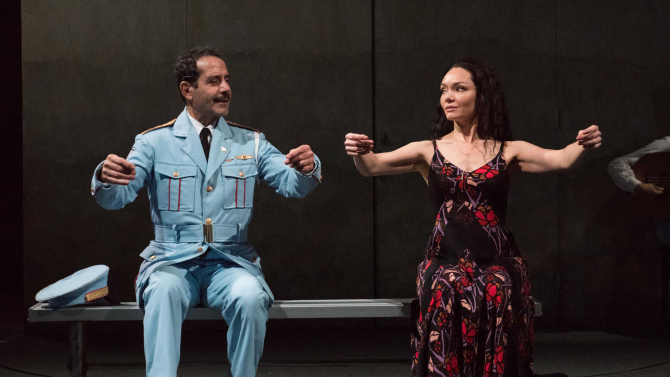 The Lucille Lortel Awards ceremony was star studded with Broadway alumni. The who’s who and the brightest of theatre were in attendance.

Starting off the award ceremony was host Taren Killan, who introduced Shoshana Bean who belted out “Steppin’ Out with My Baby.”

The first award was presented by Jennifer Morrison and Matthew Perry for Outstanding Featured Actor in a Musical and the winner is …Joel Perez for Sweet Charity!

The Hairy Ape, Bobby Cannavale and Annie Parisse awarded the Outstanding Featured Actor in a Play to Michael Aronov, for Oslo!

A Bronx Tale’s Nick Cordero presented the Outstanding Featured Actress in a Play to Randy Graff, for The Babylon Line!

A multilingual “New York, New York,” by original cast members from And the World Goes Round! entertained. 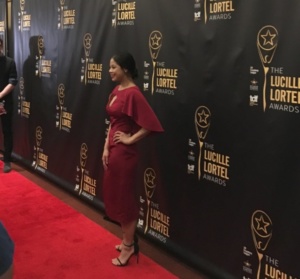 Steven Pasquale presented Outstanding Lead Actress in a Musical to Katrina Lenk, for The Band’s Visit.

The Blue Man Group breaks to awards to entertain.

A moment to morn those we lost.

One of my favorite shows was Ride The Cyclone and Michael Potts and Gayle Rankin are here to  introduce thisOutstanding Musical nominee.

Finn Wittrock  and Rachel Brosnahan presented Outstanding Lead Actor in a Play to Joe Morton, in Turn Me Loose.

GeorgeTakei and Debbi Mazar presented the Outstanding Lead Actress in a Play to Jennifer Ehle, for Oslo.

The shock of the night is Best Musical Award is given by Judith Light to The Band’s Visit.

The last award of the night is presented by Andy Karl to Oslo.

Outstanding Musical: The Band’s Visit: Produced by Atlantic Theater Company, Music and Lyrics by David Yazbek, Book by Itamar Moses, Based on the screenplay by Eran Kolirin.