Events in August Are Plentiful 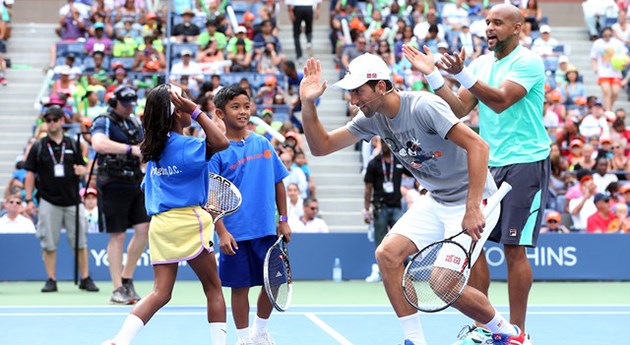 Events in August Are Plentiful

Those summer days are winding down, but the events are revving up. The choices are plentiful with theatre, film festivals, sports, music, food, art and so much more, August has something for everybody.

8/ 1 – 3: The Asian American International Film Festivalscreens films by and about Asians and Asian Americans at Asia Society and other venues.

8/ 1 – 11: Out of Doors is three weeks of world-class music, dance, and spoken word in Damrosch Park and the plazas of Lincoln Center if weather permits. Free.

8/ 1 – 15: Watch popular shows on and off Broadway perform excerpts from their biggest hits Thursday afternoons at Broadway in Bryant Park. Arrive at 11 a.m. to get a seat and watch the pre-show. Free.

8/ 1 – 16: Get a special deal on a 2-course lunch or a 3-course dinner at 370 restaurants during NYC Restaurant Week. Saturdays excluded, Sundays included at some restaurants.

8/ 1 – 9/ 8: Free Summer Movies are shown evenings at parks in Manhattan, Queens, Brooklyn, and the Bronx.

8/ 2 – 9/ 7: Sit on the lawn at Bryant Park Picnic Performances to see free music, dance, theater, and even opera. Schedule.

8/ 3, 10, 17: The city closes Park Avenue and Lafayette Street to cars so you can play, run, walk, and bike car-free from Brooklyn Bridge to Central Park during Summer Streets, with food, entertainment, and activities. Free.

8/ 4: Ecofest has exhibits about alternative energy and the environment, green vehicles, food, and entertainment in Times Square. Free.

8/ 5 & 12: Hear authors read, ask them questions, and get your book signed at Books Beneath the Bridge on the steps at Granite Prospect in Brooklyn Bridge Park.

8/ 8 – 11: The Giglio Feast of Saint Antoniocelebrates Italian food, culture, religion, and tradition. On Sunday, a platform holding a 12-piece band and 80-foot statue is carried through the streets of East Harlem. Free.

8/ 10 – 11: Play NYC is a weekend of playing games and attending talks about game development at the Metropolitan Pavilion.

8/ 13 – 15: See popular films at Central Park Conservancy Film Festival. Bring a picnic and blanket for the lawn, but no chairs, glass bottles, or alcohol. Captioned. Free.

8/ 24: Arthur Ashe Kids’ Day begins with a free festival of games and tennis activities outdoors at 9:30 a.m., followed by a ticketed show and concert at 1 p.m. in Arthur Ashe Stadium.

8/ 24 – 25: Afropunk Brooklyn is a multicultural weekend of live music with an art and craft market, and food trucks at Commodore Barry Park.

8/ 26 – 9/ 8: Watch the world’s best players compete under the open sky at the U.S. Open Tennis Championship at Arthur Ashe Stadium in Flushing Meadows.

8/ 29 – 9/ 1: Watch 300 unicycles roll around the city Thursday and Friday, or try it yourself at New York City Unicycle Festival, with unicycle sports, exhibitions, and races at Governors Island on Saturday and Sunday. Free.