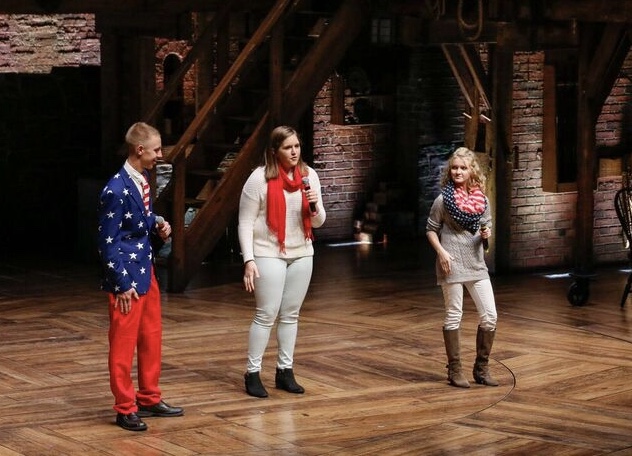 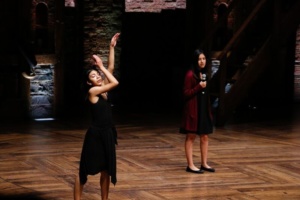 When it comes to Broadway, it would be next to impossible to find a show that has created more of a revolution with young people like Hamilton the Musical. Lin-Manuel Miranda’s 11 time Tony Award-winning show uniquely bridges the worlds of American history with diverse performing arts like no other in recent memory. On top of sold-out performances from coast to coast, a transformative educational program has also been created, the Hamilton Education Program, bringing history to life in the classroom. In Chicago, with the aid of The Crown and Goodman Foundation, Ken Griffin, The Joyce Foundation, Polk Bros. Foundation, Pritzker Foundation, Pritzker Traubert Family Foundation and the Robert R. McCormick Foundation, thousands of students from 25 participating schools not only attended a live production of Hamilton the Musical, but 15 additional student performances took to the same CIBC stage as the Chicago based troupe. The students performed their original works, all with a focus on the integrated curriculum focused on Alexander Hamilton and the Founding Fathers. 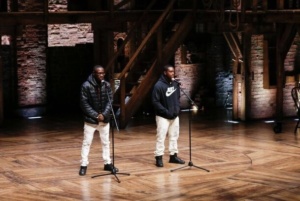 From rap to poetry, including original songs and modern dances, these brave, bold and tenacious high school students embraced this unique opportunity to perform in front of a live audience of 1,900 of their peers, all embracing the opportunity to take their shot at Windy City stardom. Hosted by current Hamilton actress, Montego Glover (Angelica Schuyler) this program proved the Whitney Houston song lyric to be true. “I believe the children are our future. Teach them well and let them lead the way.” 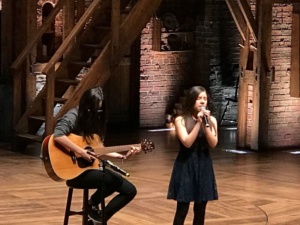 The first to perform were Marieli Lopez and Lili Sheehan from Amundsen High School. Singing an original song titled, Iron Chain, this folk style vocalist and guitarist was reminiscent to singer/songwriter, Grammy and Tony nominee, Sara Bareilles. With music teacher Bill Spain by their side, the ladies shared with me they were nervous to go first, however Lopez announced “once we performed, we felt safe.” “It felt awesome” added guitarist Sheehan. I was completely blown away when these talented students shared with me the music and lyrics only took about two hours to craft. I am confident we have not heard the last from this dynamic duo. 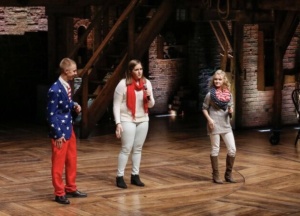 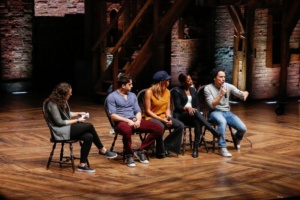 Noble – Rowe-Clark Math and Science Academy Kendarius Ellis and Carshawn Murphy Phyllis Wheatley rap was political in nature, speaking of Trayvon Martin and Black Lives Matter movement in their work. This piece was electric, speaking to the social consciousness of yesterday and today. I was able to speak with both of them at the conclusion of the showcase and they shared with me this piece was a team effort. Purposely political and absolutely unapologetic, it was written with the help of additional classmates, but when it came time to perform, Ellis and Murphy stepped up to the microphones, excelling as a duo. When asked how they thought their performance went, they shared with me “We did good.” 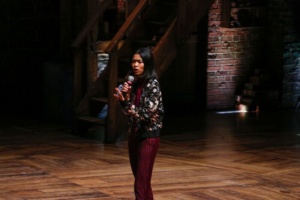 The ladies also rocked the microphone, with bold performances and strong lyrical raps from Perspectives Charter Rodney D. Joslin performers Mya Sankey and Shenielle Hudson in their piece, The British Are Coming, Perspectives IIT Math & Science Academy’s Destiny Brown rallying about Taxes, Prosser Career Academy’s Sara Concepcion donning a period accurate hat for her Father of the Constitution, United Township High School Itzeel Rivera and Betsy Muniz powerful, It’s Common Sense and a poised Waukegan High School student Holly Rosales’ These are my Flowers for the Enduring. “Being human means more than being documented.”  These sisters were clearly doing it for themselves. 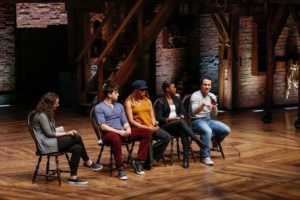 Finally, the presentation wrapped with a question and answer session from current Hamilton cast members Miguel Cervantes (Alexander Hamilton), Montego Glover (Angelica Schuyler), Candace Quarrels (Peggy Schuyler/Maria Reynolds) and John Michael Fiumara (Ensemble). Each spoke about what inspired them to get involved with musical theater, the audition process, the rehearsal schedule and how this show has changed their perspective on history. “Humanizing these people who formed our nation” but keeping in mind they were “just regular people” spoke to Quarrels. Glover added the importance of “making this world look like the world we want to see in our real lives. The lines do get blurred.” When asked what they wanted this student audience to get out of this production, the first live Broadway show for most of the students in this audience, Cervantes said it best. “Go create. Don’t be rude, don’t be shy. Go change the world.” I couldn’t have said it better myself.