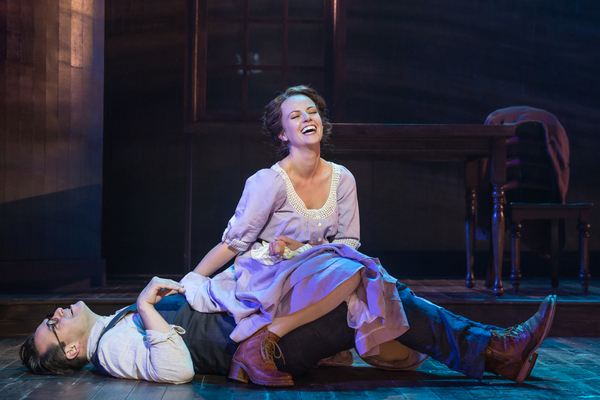 Himself and Nora A Sexual Romp

Himself and Nora A Sexual Romp 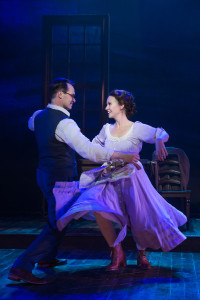 James Joyce is brought to life in the sexual new musical Himself and Nora. This new musical by Jonathan Brielle, is about the career and love life of James Joyce (Matt Bogart, Jersey Boys) and it makes it abundantly clear that these two lusted after each other with a feverish passion, despite the woes of life. James Joyce’s 37-year relationship with his Galway-born muse and eventual wife, Nora Barnacle (Whitney Bashor, The Bridges of Madison County) would become the bases for his writing. 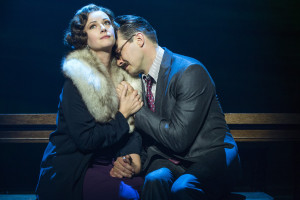 The musical starts with Joyce’s unexpected death in 1941, and his last rites being given by his local priest (Zachary Prince). When Nora refuses to let Joyce pass on, we flash back to Dublin in the early 1900s, where the educated Joyce’s mother is dying and his father lost in drink. When he meets Nora a vibrant, plain-spoken chambermaid they spiritually connect and we follow their story. As she becomes the love of his life and an inspiration for his work, “Compatriots in Lust” establish the couple’s passionate relationship. Joyce has a rebellious attitude toward the Catholic church and because of it he will not wed Nora for 27 years. In poverty they are self exiled to Europe, have children and struggle until well-to-do sponsors publish “Ulysses.” Joyce’s alcholism, chronic vision problems and egotistic ways strain his relationship with Nora, but she“Stand(s) Fast.” 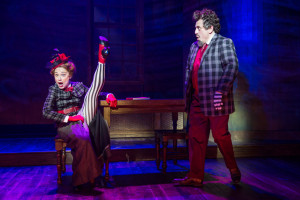 The book here is dull, the music fares better with the song “Without a Man” a stand-out. For a show that has been kicking around awhile it should be more advanced in it’s story telling. Sadly Joyce gets swept under the carpet as Nora takes center stage. If it were not for the handsome, vocally sound Bogart who makes Joyce tolerable, the character would come off as highly unlikeable. We never learn why he loves Nora except for his lust except of “Always in love.”Joyce needs an I want song that sets him center stage. Bashor is the surprise here. When this was originally announced and I heard they were not using the talented Jessica Burrows, I thought they were insane, especially after I was at the meet and greet, but Bashor embodies the earthy Nora with a grounded sexuality and warmth. Together with Mr. Bogart their chemistry leaps off the stage in leaps and bounds. Their intimate body language is believable and I believe they finished each others sentences. With great love comes great sparing and Bashor and Bogart are perfect together. McCormick, Prince, and Dobbs are well suited in their multiple roles, especially Miss Dobbs who is incredibly talented.

Michael Bush’s direction needs to pick up the pace. Jonathan Brielle needs to work with a collaborator. I have seen a few of his shows and his work would excel if he did. Paul Tate DePoo III’s set and Jason Lyons lighting is simple yet perfect. Amy Clark’s period costumes were also well done..

Joyce was prolific writer and it would have been nice to have at least a few pieces by the acclaimed writer. Maybe that is why it is called Himself not James Joyce.