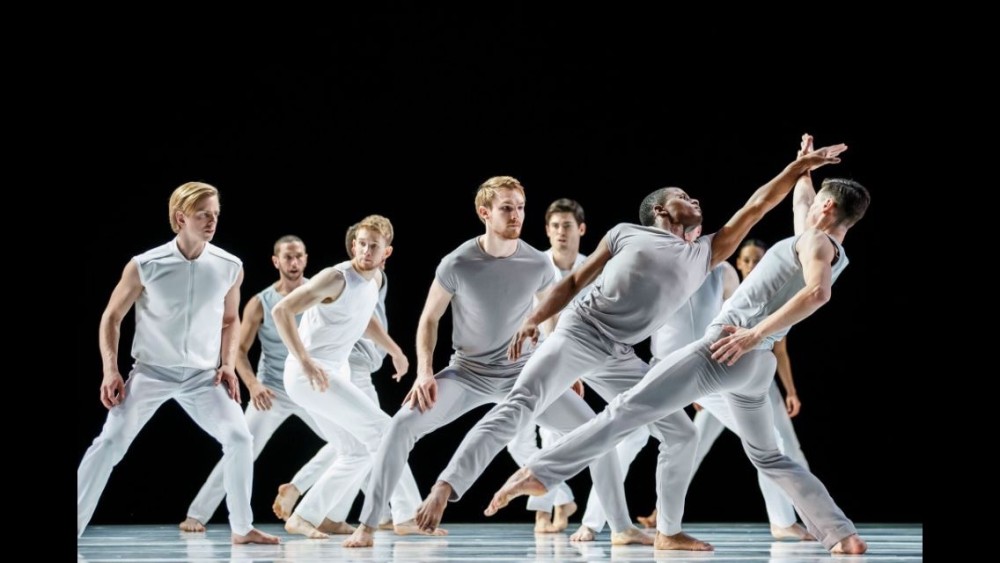 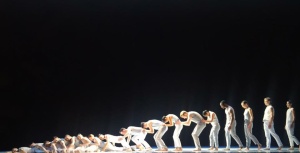 Just as the leaves change colors and tumble from the trees, it is time for the quarterly performance of modern dance troupe Hubbard Street Dance Chicago to once again grace the stage of the Harris Theater with their typically bold and brazenly sharp contemporary movements. Molding this seventeen member company, a trio of choreographers; Jiri Kylian, Harris Theater Inaugural Choreographer in Residence Brian Brooks, and Resident Choreographer Alejandro Cerrudo. While the shaping was all done this time by male choreographers, what I found so exquisite is the diverse and global talent that appeared on the Chicago stage. A bold and visually dynamic quartet of pieces, two world premieres and two “oldies, but goodies” a captivated audience was thoroughly entertained throughout. 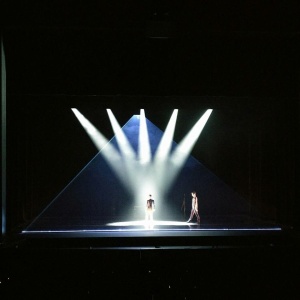 The first two pieces of the evening featured a series of energetic, fluttering feet and hands, set against the repetitive percussive score written by Steve Reich. Titled “Falling Angels” a team of eight female dancers worked in unison to visually mystifying results. The tribal formation of bodies was reticent of Beyoncé’s last tour, proving once again that “Girls, Run the World.” At least this world. Joop Caboort’s distinctive lighting and Joke Visser’s costume design added cadence to the proceedings. Known for using very little props beyond the human body, the second number,“Sarabande” also choreographed by Jiri Kylian, began with a sextet of opulent gowns with the male dancers hidden underneath, emerging from the billowing fabric of the exaggerated hoop skirts. Not only did they successfully work these ornate props into the piece,  “Sarabande” also played with elements of sound and light. The six male dancers, at varying points, all primal screaming which was then electronically manipulated.  At one point, the company pulled their t-shirts over their heads like hoods, then shirtless, and eventually dropping their trousers as well. This moment was not a Magic Mike instant meant for simple, lustful titillation. I was pleasantly surprised this segment didn’t inspire any nervous giggling or whistling from the audience. 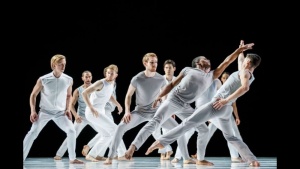 After a brief intermission, it was time for the world premiere piece “Terrain” crafted by Harris Theater Inaugural Choreographer in Residence Brian Brooks. With Nicole Pearce’s lighting and Karen Young’s costuming, the inherent tension of this edgy piece was nothing short of stunning. Visceral really, with all 16 performers dressed in muted, subtle shades of white, oatmeal and grey. Quirky, repetitive  and powerful, the dancers morphed their bodies much like writhing centipedes. A collection of inspired movement constantly evolving in an organic progression of humanity.  Brooks is a wonderful addition to a troupe known for edgy and innovative routines.

The final piece of the night, another world premiere, “Niebla” from Resident Choreographer Alejandro Cerrudo.  The Avant guard narrative mixed with futuristic angular lighting by Michael Korsh and an array of charcoal and copper costuming designed Branimira Ivanova, was signature Cerrudo style. His 15th original work, resident choreographer Alejandro Cerrudo is proving himself indispensable to the Hubbard Street team. Sexy, strong and tenacious, they ended the night with a bang.

As I always conclude my Hubbard Street reviews, the fleeting performance schedule is my only legitimate criticism.  Constantly pushing artistic boundaries through their dances, Hubbard Street is a proven “bang” for your entertainment buck. While modern dance may not be everyone’s taste, Hubbard’s methodology is as inclusive as it is entertaining. Generally, Hubbard’s approach is to keep their routines both clutter and distraction free, keeping the focus solely on the dancers and their intricate movements.  I rather enjoyed the additional tinges of ornamental set pieces and heightened sensory stimulation through sound manipulation. While not their traditional “bread and butter” the mix was an added layer to this established dance house’s repertoire.