Is There No Stopping Lin Manuel Miranda?

Is There No Stopping Lin Manuel Miranda? 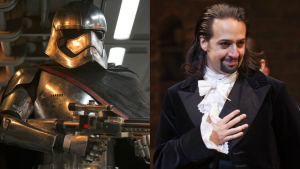 Lin Manuel Miranda has been confirmed to star in Disney’s Mary Poppins opposite Into The Woods star, Emily Blunt. For those who don’t know Miranda composed original music for Star Wars: The Force Awakens and his original music will be featured in Disney’s upcoming animated film Moana.

Miranda plays Jack, a lamplighter like chimney sweep Bert, played by Dick Van Dyke in the orginal. Rob Marshall is directing with Marc Shaiman and Scott Whitman (Hairspray, Smash, Catch Me If You Can), are creating the score. the and a the screenplay is being written by Finding Neverland‘s David Magee.

Miranda who leaves the Hamilton in July, has resisted all offers, to film the soon to be Tony golden show. Now not only is this prime theatre box box office golden bu you know when this show is made into a film it will become even more coveted. Before Manuel leaves the show he is planning on filming the show in its present state with Miranda as the lead, of course.

This is one man, who knows how to not give away his shot!

We leave you with the latest Ham4Ham.

Suzanna BowlingJanuary 26, 2023
Read More
Scroll for more
Tap
She Wanted to Dress Up New York, In Memory of Dana Lorge
See Some Great Broadway Stars and Shows Perform for Tunes In Times Square