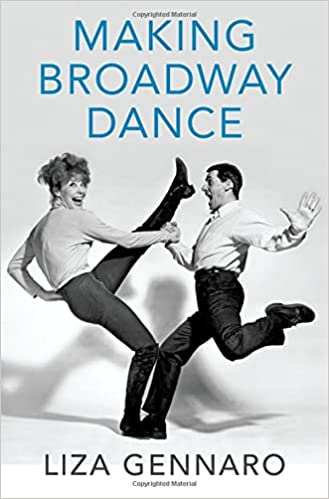 Broadway choreographer Liza Gennaro will lead a talk and signing for her new book “Making Broadway Dance” at The Players, a historic membership club in a Gramercy Park South Gothic Revival mansion, on March 2, 2022. The Players was founded in 1888 and has always been a club of artists and arts lovers. Players were here before Broadway became Broadway, making this a fitting union of author and organization. This members-only event aligns with the Club’s continued celebration of the richness of creative communities with exclusive events and relaxed socializing.

“Making Broadway Dance” landed the #1 position on two of Amazon’s key book charts – Dance Hot Releases and Music Hot Releases – in early December. Through in-depth analysis of musical theatre choreography and choreographers, the book challenges long-held perceptions of Broadway dance as a kitsch and disposable dance form created without artistic process and demonstrates that the art form is not a monolith but is rather multifaceted in terms of dance styles, aesthetics and methodologies. Making Broadway Dance is available for purchase on Amazon or through Oxford University Press.
Aimed at students, academics, and anyone who loves musical theatre and dance, “Making Broadway Dance” by Manhattan School of Music’s Dean of Musical Theatre Liza Gennaro gives valuable insights into how Broadway dance is made. Gennaro examines choreography for musical theatre through the lens of dance studies, script analysis, movement research, and dramaturgical inquiry, and in doing so gives a close-up look at a dance form that has been analyzed only superficially until now.
The daughter of Tony Award-winning choreographer Peter Gennaro, Liza was privy to a close-up look at musical theatre dance and explained, “When I was in grad school 15 years ago, I realized that a scholarly book examining the systems and methods of making dance for musical theatre did not exist,” Gennaro explains. “That realization began my journey to completing the book, which I hope can shift industry-wide perceptions and increase well-deserved respect for musical theatre choreography. Unlike other dance genres, it responds to predetermined aspects of librettos – time, place, plot and character – and employs dance to tell the stories.”
Making Broadway Dance examines the choreographic systems of some of Broadway’s most influential dance-makers, including George Balanchine, Agnes de Mille, Jerome Robbins, Katherine Dunham, Bob Fosse, Savion Glover, Sergio Trujillo, Steven Hoggett, and Camille A. Brown.
By considering influences from ballet, modern, postmodern, jazz, social, and global dance, the book offers a rich understanding of musical theatre dance through the lens of dance innovation, cultural trends, and racial and gender exclusion.
Liza Gennaro is Dean of Musical Theatre at Manhattan School of Music, a choreographer and a writer. She is a contributor to The Oxford Handbook of the American Musical, The Oxford Handbook of Dance and Theater, The Routledge Encyclopedia of Modernism, The Routledge Companion to the American Contemporary Musical and the upcoming Oxford Handbook of Television Musical.
On Broadway, Liza choreographed the critically acclaimed Broadway revival of The Most Happy Fella directed by Gerald Gutierrez and the Broadway revival of Once Upon a Mattress starring Sarah Jessica Parker. She choreographed Roundabout Theater Company’s Tin Pan Alley Rag (2010 Outer Critics Circle Nomination, Outstanding New Off-Broadway Musical) and has choreographed extensively in regional theaters across the country including: Hair at Actor’s Theatre Of Louisville, directed by Jon Jory, the world premiere of A…My Name is Still Alice at The Old Globe in California, and the world premiere of Martin Guerre at Hartford Stage, directed by Mark Lamos, Babes in Arms at Guthrie Theater, directed by Garland Wright, Kiss me Kate and The Most Happy Fella at The Goodspeed Opera House, Fiorello, Gypsy, My Fair Lady, Jesus Christ Superstar and The Secret Garden at Pittsburgh Civic Light Opera, Gypsy, starring Betty Buckley, and Ragtime at the Paper Mill Playhouse and twelve consecutive seasons of musicals at The St. Louis “Muny” Opera.
Liza collaborated with Stephen Flaherty and Frank Galati on their chamber musical Loving, Repeating: A Musical of Gertrude Stein for the About Face Theater in Chicago and choreographed the 30th Anniversary tour of Annie. Liza has choreographed and directed The New York Pops Carnegie Hall Christmas Concert: How the Grinch Stole Christmas (2010), Rudolph the Red-nosed Reindeer (2014), Holiday Follies (2015) and A Charlie Brown Christmas (2012, 2015) and ‘Twas the Night Before Christmas (2016).
Her adaptation of A Charlie Brown Christmas is a yearly holiday tradition at San Francisco Symphony. Liza served three consecutive terms as an elected member of the Stage Directors and Choreographers Society Executive Board, served a three-year term on the Tony Award Nominating Committee and is a Tony Voter.
Making Broadway Dance is essential reading for theatre and dance scholars, students, practitioners.
Making Broadway Dance is available for purchase on Amazon or Oxford University Press.
Related ItemsBroadway ChoreographerLiza GennaroMaking Broadway DanceNewThe Players
Book Reviews